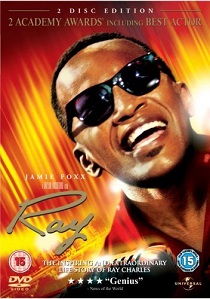 Like most black people of the time, the young Ray Charles Robinson lives in poverty. His mother Aretha scrapes together a living from what work she can get from the whites. Still, knowing nothing better, both he and his brother have a great time playing together whilst also sneaking off to learn how to play the piano. However, in a memory that will haunt him for years, that all changes when he witnesses his brother drown in a tub of dirty laundry water. But matters are made even worse when Ray discovers that he's going blind and nothing can be done to help him. His mother is determined that nobody is going to take advantage of him and she instills in him a self reliance and confidence that will assist him in future years.

Fast forwarding to the 1940's and his adult life, Ray is waiting to catch a bus to Seattle and his first job at a jazz club. With the bus driver reluctant to look after a blind black man all the way from Florida, Ray uses his initiative and claims that he lost his sight on the beaches of Normandy during the landing. This instantly gains some sympathy and respect from the driver and he's soon on his way to Seattle and the start of something bigger and better. Although his talent is obvious from the beginning his blindness results in him being shunned by the other band members and, still racked by guilt from the death of his brother, he finds some form solace in the murky world of drugs.

But his music continues to enthrall his audiences and wherever and whenever he's playing the venue is always full to bursting. So it doesn't take too long before he's discovered by Atlantic Records producers Ahmet Ertegun and Jerry Wexler. But since Ray's songs and style are so similar to other singers of the age, Ahmet suggests that he tries one of his songs; The Mess Around. With a little encouragement from Ahmet, Ray soon comes up with a style that has the recording studio jumping and a hit record racing up the charts. And as they like to say, the rest is history.

The picture is wonderfully rich and detailed, although it can have an over saturated and soft look to it. However, this is a deliberate attempt to date the images to the late forties and fifties as well as indicating flash back scenes to Ray's youth and the time he could see. Still, it all works well as the stock footage of Seattle and New York, which although noticeable, blends in quite well whilst the flash backs become obvious as such. The colour and flesh tones are impressive whilst black levels do tend to suffer from the picture softness, as does the occasional problem with outlining. Still, the transfer is free from signs of dust specks and other picture imperfections whilst the bit-rate remains above average throughout.

Given the rather long running time and the addition of a full length commentary the film is accompanied by a rather disappointing 384 Kps Dolby Digital soundtrack. Whilst this level of compression isn't usually a problem, in this instance there is definitely something missing from the sound mix. The dialogue has the usual crispness and clarity in the front and centre channels and there's some reasonable use of the surround channels by the musical score and occasional ambient effect. However, the many musical numbers sounded rather flat and messy and the score seemed to be in the rear channels simply for the sake of it. Also, certain scenes which cried out for surround effects, such as the young Ray starting to use his ears instead of his eyes, were rooted in the front channels.

I would have willingly given up the audio commentary and the extended version of the film, which is simply the same deleted scenes from the second disc spliced into the main film, for a higher bit-rate or a much more dynamic DTS soundtrack. Whilst I will be the first to admit that I'm not a big fan of jazz, or even a fan of Ray Charles for that matter, after watching this film and tapping my feet to the superb tunes of The Mess Around and the sublime Georgia I think I'll be definitely checking out the soundtrack CD. And with any luck it should be a whole lot more rewarding on CD than here.

The main menus on both discs are animated with cut-scenes from the film as well as being scored with the song Georgia. The menu transition effects are impressive whilst the subsequent menus are scored with another hit tune from the film. Still, hang about on a menu for too long and it will time out and revert to the previous menu.

With the extended edition of the film running for the best part of three hours, as well as being accompanied by a full length audio commentary, it's hardly surprising that the extras have been farmed out to a supplemental disc. Fortunately, this hasn't been reflected in an inflated RRP and these extras do manage add some additional value to what is already a splendid film. Still, some of the extras aren't as good, or as long, as I had originally expected.

The extras on disc one are limited to a rather short trailer for Universal's Mediterránea resort in Spain, options for the descriptive audio track (which is a welcome additional, especially considering Ray Charles' blindness) and an Audio Commentary from director Taylor Hackford for the theatrical edition of the film. Taylor's commentary is an interesting one, and straight from the off he's providing information about the film, Jamie Foxx's involvement in the opening credits and the hideous segregation of the blacks. Taylor even admits that he's got a lot to talk about, and boy, does he talk. With plenty of "I'll talk about him or that later" comments it can be quite difficult to keep track of what's happening. Never-the-less, just like the film, it is certainly something worth investigating, even if it is only for the key scenes.

The remaining extras are on the second disc. Things start off with twenty seven minutes worth of deleted scenes. There are fourteen in total and you have the option of selecting an individual scene or watching them all in one go. Fortunately, director Taylor Hackford continues with his excellent commentary from the main film with an equally interesting yack track to accompany these deleted scenes. However, if you opted to watch the extended version of the film you'll discover that the extended edition of the film is simply made up of these same scenes. Next up is the Extended Musical Performances section. Running for just under five minutes it features two complete and uncut performances of What Kind of Man Are You? and Hit the Road Jack. The tracks can either be individually selected or played in one go. Naturally, the music fans amongst you will want to watch and enjoy this section.

The ten minute Stepping into the Part feature contains interviews with both director Taylor Hackford and Jamie Foxx. Taylor is full of praise for Jamie and his unexpected piano skills, whilst Jamie talks about how he went about creating his character and how he coped with the prosthetics which made him blind for nearly fourteen hours a day. But the best part of the featurette is the behind the scenes footage of Jamie with Ray Charles as they practice together before Ray finally gives him his seal of approval. The disappointingly short three minute A Look Inside Ray featurette contains far too much repeated material from the previous featurette plus numerous clips from the film. As a result it's rather pointless filler material and nothing like I was expecting.

Things are rounded with the usual collection of trailers. This includes the Theatrical Trailer, a trailer for the Soundtrack plus a Trailer for Genius : A Night with Ray Charles. Other than the audio commentary for the main film and the deleted scenes the extras are actually a bit of a disappointment with the featurettes, which although interesting, being far too short.

Given that the running time is close to that bum-numbing two and half hour level which pretty much dictates whether a local cinema is graced with my presence, even with the wonders of the pause button for bathroom breaks or nacho refills it's a long film to watch - even more so given the rather pedestrian pace of the film. However, if you are made of sturdier material and are equipped buns of steel you can also opt for the near three hour extended version. Still, which ever version you choose, not only is the film extremely interesting and watchable, it is the sheer fact that the academy awards committee had to even spend a second of time considering the contender for best actor award, let alone drawing up a shortlist. From the moment Ray was released theatrically there was no doubt who the winner would, and should, be.

Jamie Foxx is simply a revelation from start to finish and with his inch perfect lip syncing to Ray Charles' classic recordings you could almost believe that he was the real man. I was even more astounded that his piano skills were remarkably accurate - which turned out to be hardly surprising as the extras reveal that Jamie Foxx is an accomplished classical pianist with a seal of approval from the great man himself. It's just a great shame that Ray Charles didn't see just how well the film was received, but as they say, in death a legend is born.

It really couldn't get any better than this and Jamie's performance here is sure to be a defining moment in his career. Some people have criticised the length of the film and it's meandering plot, but be in no doubts, this guy can truly act and it's all about the music. Justifiable criticism or not, rent or buy, you really must see this film. However, a word of warning, there are quite a few references to, and usage of, drugs which some people may find uncomfortable to watch.