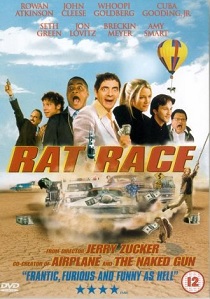 Donald Sinclair is a Las Vegas casino owner who likes to offer his high roller customers something different from the slot machines and the various gambling tables. For they'll gamble on anything, from the flavours of chocolates to the price demanded from a hooker for bizarre requests. However, Donald has come up with his best gambling opportunity yet by placing six golden tokens in his slot machines.

As the tokens are won the winners are invited to the penthouse to attend a meeting hosted by Donald. It is there they are told that they are the lucky contestant in a special race with a very worthy prize. They are all issued with a key and told that it will open a locker at a train station in the small town of Silver City, New Mexico. Inside the locker there is $2 million dollars for the lucky person who gets there first. However, the participants are unaware that Donald's high rollers are gambling on who'll reach the money first.

The lucky winners are from a wide circle. It includes Nick who's attending his brothers bachelor party but won't take any risks and brothers Duane and Blaine who are in the casino with insurance fraud on their minds. Then there's Owen the NFL referee who's just made a massive mistake in front of millions of television viewers and the recently reunited mother and daughter Vera and Merrill. Finally there's the Pear family with the hen pecked husband Randall and a narcoleptic Italian called Enrico.

The picture is bright and colourful with a reasonable amount of detail. Mind you, the colours can become a little washed out during some of the brighter outdoor scenes, although this can be forgiven when you're in the middle of the Nevada desert. The bit rate is average and there's no signs of any artifacting or outlining. However, the source of the print used for the DVD is a little suspect as there were numerous dust scratches evident throughout the film.

The sound is nothing to get excited about with little or no real actively in the surround channels. The dialogue is clear enough in the front channels and there is never any need to adjust the volume during the film. I really wasn't expecting too much from the sound, especially for the genre of the film, but they could have made a bit more of an effort.

The menu is cleverly animated in what can only be described as shamelessly Python like with small versions of the characters dashing about the screen. It's all accompanied by the annoying soundtrack on the main and each subsequent menu, which are also impressively animated.

The extras are nothing special, although some of the deleted scenes are quite funny and in my opinion should have been in the film. There's an interview with Jerry Zucker and Andy Breckman with Jerry also introducing most of the Deleted Scenes and the Gag Reel. However, he spends most of the time laughing about how hilarious they all are, when in fact they're not really all that funny.

Matters are made much worse by the fact that the extras are advertised on the front cover with a sticker placed on the actual paper inner-sleeve. I don't mind if a sticker on the plastic outer-sleeve, but putting it on the inner-sleeve is a near criminal offence in the world of DVD.

Rat Race is a reasonable comedy which crosses paths with The Cannonball Run and It's a Mad, Mad, Mad World. Unfortunately, it doesn't come anywhere close as being a funny to both. The only redeeming feature is John Cleese and his massive white teeth which seems to poke fun at the Americans obsession with their teeth.