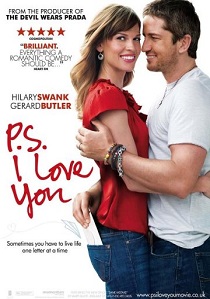 ReviewComedyRomance
Review Article Go back to homepage
Based on the Cecilia Ahern novel of the same name, P.S. I Love You tells a story of a young widow who discovers that her late husband has left her 10 messages intended to help ease her pain and start a new life.
Hilary Swank, Gerard Butler, Lisa Kudrow, Gina Gershon, James Marsters, Kathy Bates, Harry Connick Jr., Dean Winters
Comedy, Romance
2
2 Hours 2 Minutes
Thank you for supporting DVD365.net when you order using the link(s) below.
Buy DVD
Story

Holly Kennedy is beautiful, smart and married to the love of her life - a passionate, funny and impetuous Irishman named Gerry. The couple have their usual arguments - including the good old favourites of money, the size of their Manhattan apartment (which would be pretty pointless if you didn't live in Manhattan) and wanting babies, but they can't stay angry at each for long and they soon make up in the best way a couple can. So when Gerry's life is taken by an illness, it takes the life out of Holly. However, nobody knows Holly better than Gerry. So it's a good thing he planned ahead.

Before he died, Gerry wrote Holly a series of letters that will guide her, not only through her grief, but in rediscovering life, herself and to help her realise that life goes on. The letters include various tasks and treats with the first of the letters arriving on Holly's 30th birthday in the form of a cake and tape recording ordering her to get out and celebrate. In the weeks and months that follow, more letters from Gerry are delivered in surprising ways, each sending her on a new adventure and each signing off in the same way: PS I Love You.

However, Holly's over protective mother Patricia and best friends Denise and Sharon worry that this continuing link with the past is stopping her from finally moving on. But with Gerry's words as her guide, Holly embarks on a touching and exciting journey of rediscovery that takes her from New York and back to Ireland where her journey with Gerry began. And with each new letter, far from keeping her in the past, Gerry helps Holly find her way into a new future without him by her side.

The picture is bright and colourful with a good level of detail throughout. With the many varying locations - from a busy New York to the green and lush valleys of Southern Ireland, it's all handled with ease. Black levels are solid whilst there are no real issues with either outlining or pixelisation. Given that it's such a recent theatrical release the print is clean with no signs of dust specks or other forms of print damage. Basically, it's what we've all come to expect from a DVD release.

Since the film is primarily dialogue based, there is very little need for anything too dynamic in the sound department. Never the less, the 448Kbps Dolby Digital 5.1 soundtrack manages to do a good enough job - with the musical score standing out as a highlight. With some clear and precise dialogue in the centre and front channels and the surround channels occupied by the rather good musical score and occasional effect, it's the perfect audio for this film.

Once you get past the Trailers for the hideous looking The Accidental Husband plus Penelope and the British film Happy Go Lucky the static, but scored, menu is displayed. Whilst the ever increasing number of trailers is a bit annoying, at least you can skip past them. The extras are housed on their own static and silent menu. Whilst the majority of these extras won't appeal to a universal audience, the fact that this title is firmly places in "Chick-Flick" territory dictates what sort of extras on offer. Never the less, if you've been "forced" to sit through the film with your other half, the extras are not actually that bad with a music video, wide ranging interviews, deleted scenes and a handy guide to the confusing finger "clicking" game played in the film.

Love him or hate him, James Blunt is on hand to croon his way through his four minute Same Mistake video and, being the promotional video for the film, contains plenty of clips from the film. It's quite a pleasant tune from his latest album but, beware, it may even force your other half to reach for the tissues to dab away a tear or two. Next up is the seven minute

Conversation with Cecelia Ahern featurette. Looking worryingly young (like policemen, everyone is looking younger these days - perhaps I'm getting too old!) the very confident Cecelia talks about her book and how the story was transferred from rural Ireland to New York. With plenty of backstage material and interviews with the cast and crew, it's quite an interesting, albeit rather short, featurette.

Next up is the five minute "joke" featurette The Name of the Game is Snaps. If you've no idea what this game is then it's certainly worthwhile watching the film before trying to work out what this featurette is trying to explain. Needless to say, I'm still just as confused as the poor bloke in the featurette. But then again, perhaps that's the idea! Finally, there's a collection of Deleted Scenes. Running for twelve minutes, and with no method of manually selecting a scene, there's the Women Talk in Theatre, Women on Stage After Performance, Restaurant Scene, In Travel Agents and In Apartment. Unfortunately, with no audio commentary or other information about these scenes there's no explanation as to why they were cut from the film - although I felt that the deletion of the Travel Agents scene was a good move (although I won't divulge any details in case it spoils the film for you).

Based on the best-selling book of the same name by Irish author Cecelia Ahern, there are significant differences between the original book and the film. Unlike the film, both Gerry and Holly are Irish and live in Ireland, but in order to capture the extremely important dollar making American market, and not forgetting that most Americans think they are from Ireland, instead of travelling to Ireland, Holly and her friends go on a holiday to Spain. Whilst I understand there's a need for a film to make money, it really annoys me that whenever Hollywood transplants a film from a different country it always places in its own. And let's not forget that Hollywood is just as good as rewriting history for its own flag waving purposes too. After all, does anyone the furore caused by U-571?

Whilst the cast is generally good (is it me, but does Hilary Swank sound and look more like Julia Roberts every day?) Lisa Kudrow still manages to continually play her kooky Phoebe Buffay character from Friends. Talk about being type cast or, like David Schwimmer, is this the only acting style she can manage?

There's no doubt that this film will appeal to a female audience - after all, the book was also aimed at a female audience so the film is too. So with a plot that is designed to tug firmly at the heart string, be advised, a box of tissues for a sobbing lady may well be required in advance of this rather long screening. This disc should be treated as a Yorkie Bar in reverse - it's not for blokes.