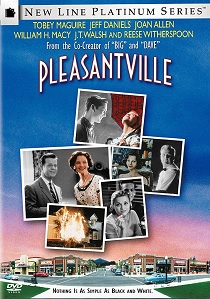 David is ready for the Pleasantville marathon, but his sister has other plans to watch an MTV concert with her boyfriend. Over a fight with the remote control it breaks with no means to change to television channels. The doorbell soon rings and a strange repair man presents them with a new remote. The arguments soon restart over the channel and after a brief scuffle David and Jennifer end up being magically transported in to the television world of Pleasantville.

Stuck in the television series they have to blend in until they can work out how to leave. Unfortunately, it is a bit like a paradox situation where any slight deviation from the television script causes things to go wrong. The inhabitants of Pleasantville are totally unaware of their surroundings and anything outside the town, even the books have nothing written in them, after all it is just a television set and with two "outsiders" in town things are sure to change.

Sex is naturally a big no-no in a 1950's traditional family values sitcom, and when Jennifer is taken by her boyfriend, Bud, to lovers lane he ends up getting more than a 50's hand holding experience. Over time the two visitors influence, mainly Jennifer's, gradually changes the black and white 50's world of Pleasantville to 90's colour.

The picture is rich and colourful with a pin sharp image, especially in the earlier moments of Pleasantville where their influences are causing parts of the town to become coloured. The movie was actually shot completely in colour and then electronically altered to remove the colour. With frames containing both colour and black and white images there could be problems with edge enhancements and outlining. Fortunately, there are no signs of problems and one of the best moments in the film must be when a red rose comes into bloom in a black and white surrounding.

The sound is good with some clear and precise dialogue in the centre channel. There's a reasonable amount of activity in the rear channels, with it being mostly employed by the 50's musical score, and together with the excellent visuals it all adds up to an enjoyable night in front of the television.

I found this film especially funny as the towns folk attempt to understand and dismiss the changes happening all around them. When the fire service are called to a fire they stand around without a clue of what to do. After all, they just rescue stranded cats all day!

The repartee between David and Jennifer is brilliant as David attempts to follow script whilst Jennifer causes havoc by introducing 90's sayings and sexual practices causing a complete change in the teenage population of the town.