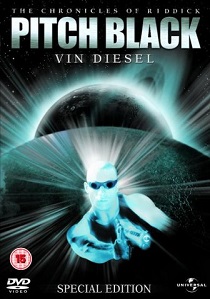 Riddick is an extremely dangerous murderer who has finally been captured and is being transported, along with additional transit passengers and cargo, to a planet where he is to be permanently incarcerated. Fully restrained and kept in cryostatis nothing can go wrong with this easy money trip, but that's until a mini-meteorite shower peppers the ship, kills the captain and sends it careering towards a remote and inhospitable planet. Fighting to regain control of the ship the remaining crew start to awake the other passengers and jettison the cargo pods, but it's to no avail and the ship breaks up and plunges towards the planet. Heavily damaged on impact the ship is totally useless and many of the crew and passengers have been killed or injured during the crash landing.

Initial scans of the planet don't bode well for the survivors as there's no sign of water, their SOS signal may not have been sent, the planet is in the permanent glare of three suns and animal remains litter the crash site. But if things weren't bad enough already, Riddick has escaped from the crashed ship and the remaining survivors gather all the fighting equipment they can find in order to hunt him down. But when one the crew goes missing the survivors assume that it was Riddick and when he is finally captured they're ready to execute him. But when Riddick claims that he wasn't responsible he gets them to investigate a mysterious hole in the ground close to the crash site.

It doesn't take them long to discover that there's something lurking beneath the ground and after coming across an old mining outpost which appears to have been abandoned in some hurry, but leaving an unused escape shuttle, they soon realise that the local wildlife may not be that friendly. However, like vampires, these creatures cannot tolerate daylight, so as along as the suns continue to blaze upon the planet everything should be OK. After all, with three suns providing perpetual daylight like an artic summer, there's little chance of day becoming night.

But when a crew member uncovers an astronomical map of the solar system they notice that the planet does indeed descend into darkness every 22 years when the planets line-up and a total eclipse occurs. And guess what, one such event is due in the next few hours (what are the chances of that eh?). But where the previous human colonist failed, these survivors have one ace up their sleeve. Riddick has had his eyes surgically enhanced so he can see in total darkness, so as the daylight starts to fade it looks like they'll need to do some sweet talking to help them escape before the feeding frenzy begins.

Set on a planet basking in the light of three suns there can only be one outcome regarding the picture - bleached colours, high contrast and a picture transfer ripe for being a total disaster. However, the transfer is actually rather good, with a wonderfully sharp and carefully over-exposed look giving the planet that real inhospitable appearance. Trouble is, it is that sharpness that highlights a number of flaws in the print as well as causing a few problems with artifacting, especially in some of the darker scenes.

The CGI effects are also impressive, with the opening ten minutes really standing out with a excellent planetary flyby and ultimate cargo ship crash. Even the CGI creatures look remarkable, even if they do look like they've been created by the fair hand of a computer. But with most of the action taking place during the eclipse the creatures can blend in nicely with the darkness. Considering Pitch Black was touted as being a 'B-movie', I was more than impressed with the results.

You only have to consider the opening few minutes of the film to realise just how off the mark things are. The initial meteorite storm and then the crash landing onto the planets surface should have been a surround sound extravaganza, but instead, the action remains heavily focused on the centre channel with very little in the way of real nerve jangling effects finding its way to the rear channels, and when they do they're hardy very effective. Fortunately, things do improve slightly, especially in the final part of the film, and whilst the dialogue remains clear and precise in the centre, the remaining channels do at least make some effort to provide some ambient effects at the rear and stereo steerage at front. The soundtrack is not the best advertisement for the science-fiction action film such as this, and it's actually a big disappointment.

The menus are superbly animated with some good CGI recreating the crash planet and dreaded total eclipse as well as being scored with some eerie music. The main menu is easy to navigate around with a single 'Bonus' menu option leading to an animated sliding submenu, which in turn can lead to another animated and scored menu. However, don't dwell around too long otherwise the film will start playing.

Owners of the original disc will already be familiar with some of the extras on the disc but, unlike the new release of The Bourne Identity Special Edition, this version is an improvement over the original with the filler material of production notes and DVD newsletter dropped in favour of material relating to the forthcoming theatrical release of The Chronicles of Riddick.

Trouble is, it still manages to come across as a bit of a cash in as it takes some liberties with the much overused Special Edition tag. After all, there is still only one disc, material has been lost and there is even a separate release of the Dark Fury : The Chronicles of Riddick animated short. This is definitely a release which would have benefited from the proper two disc special edition treatment. Never the less, the actual content of the extras is quite good, even more so if you don't already own the standard edition of the DVD.

First off, we have the nine minute opening sequence of the extremely CGI heavy sequel, The Chronicles of Riddick. Whilst a trailer may have satisfied some, this is an excellent advertisement for the new film and the marketing hype certainly worked on me as it does look like a rather good film. However, if you've never seen Pitch Black before try and resist watching (a little hard as it automatically plays on inserting the disc) until you've watched the main film as it will help explain things a little more.

Riddick fans will be equally impressed with the two audio commentaries. The first track contains Director David Twohy and actors Vin Diesel and Cole Hauser whilst the second, and more technical, commentary track contains Director David Twohy, Producer Tom Engleman and Visual Effects Supervisor Peter Chiang. Both yack tracks provide trivia galore and it's good to see a principle actor returning to provide a commentary track, although I guess Vin Diesel hadn't quite moved onto better things at the time of recording.

Then there's a number of featurettes for both films and the animated short. First off is a short introduction from director David Twohy about his ideas for the sequel followed by the standard Making of Pitch Black with a few interviews with the director and principle actors. This is followed by the A View into the Dark featurette which looks at the The Chronicles of Riddick which contains more interviews with the director and Vin Diesel. The short Dark Fury: Advancing The Arc featurette previews The Chronicles of Riddick Dark Fury - the animated prequel. Although short and straight to the point, it's a interesting look at the animators imagination and interpretation of the Riddick world.

The Chronicles of Riddick Visual Encyclopaedia feature is a sneak peek at the complete Visual Encyclopaedia feature which will be included on the Riddick DVD. Four encyclopaedia terms Orrery, Merc, Slam and The Chronicles of Riddick are available to view. Then there's the Johns Chase Log diary which recounts William Johns pursuit, eventual capture of Riddick and crash landing onto the planet. Both of these features are not the most exciting of items on the disc, but at least they do manage to offer a bit more background information to the Riddick universe.

If you're a video games fan then the trailer for the "Unreal" engine styled X-box game The Chronicles Of Riddick: Escape From Butcher Bay looks interesting. Things are rounded off nicely with a collection of theatrical trailers for Van Helsing, Thunderbirds and The Chronicles of Riddick (again!). It's just a pity they are all in 192Kbps 2.0 Dolby Stereo, and not full down 5.1. Oh well, you can't have everything.

Pitch Black has all the makings of a classic horror film - Crew mate meets grizzly end by unknown enemy; brave woman ventures into nearby dark hole; Creatures Lurk in the dark. Cue plenty of screaming, panting, frantic attempts of escape and tense dramatic music. This may be no Alien, nor is it anywhere near as chilling, but as a so called "B-movie" it does a damn good job of providing some tense scenes and scary moments. Having never seen Pitch Black before I was unsure what to expect, but I can honestly say that I was taken aback at just how good a film this really is. Ok, so Vin Diesel is not the best actor around (nor can I still understand his continual success) and the film contains plenty of cheesy dialogue, but it's the fact that it is so tongue in cheek, you just cannot hate it.

Owners of the original release will find very little to encourage them to purchase a replacement, however people new to the Riddick scene will surely enjoy this release, especially when the teaser for The Chronicles of Riddick look so darn good! As a result it's highly recommended, especially at its reasonable asking price, even though its still a blatant cash in.