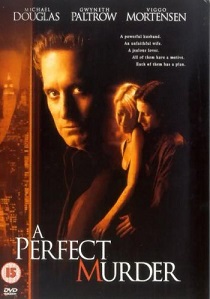 Wall Street tycoon Steven Taylor appears to be a devoted husband to his beautiful wife Emily, but the marriage is not all that it seems and he soon suspects that she is having an affair. When Steven discovers that she is having an affair with artist friend David, he manages to uncovers some interesting information and gives him an offer he can't refuse - kill his wife or else.

Unable to bring himself to murder his lover, David gets a friend to perform the deed for him but the murder attempt fails and the police soon become involved. Although the police suspect Steven he has formed the perfect cover story which is soon confirmed. However, Steven hadn't banked on the rogue murderer and David turns the tables on Steven and threatens to go to the police if he doesn't pay him off.

This film is loosely based on Alfred Hitchcock's 1954 classic Dial M for Murder so there's plenty of plot twists to keep you guessing, although they do become a little predictable during the film. I don't want to go any further into the story else it will spoil the plot, but let's just say that Steven has another motive behind his murder plans.

The picture is reasonable enough, if a little washed out, but it has an above average bit-rate throughout the film and there's no signs of artifacting or outlining. One bonus with this disc is that Warner has provided both the widescreen and full screen editions of the film.

The sound is acceptable enough, but it was nothing out of the ordinary. With this being a dialogue intensive film most of the action takes place in the centre channel with the occasional ambient effect appearing in the rear channels. However, the rear channels were effectively used for the incidental musical score.

The extras are satisfactory, with the deleted original ending which the director decided wasn't quite right for the film. Although one of the audio tracks claimed to have Michael Douglas on, each time I switched to the commentary track I never actually heard him - perhaps it was one of those five minute pre-recorded comments which was then spliced into the main commentary.

Both Michael Douglas and Gwyneth Paltrow put in good enough performances, even if I got the impression that the pair were running on "autopilot" throughout the film. Although the plot twists were rather predictable, it was reasonable enough entertainment and if you are a fan of Michael or Gwyneth then you won't be disappointed.