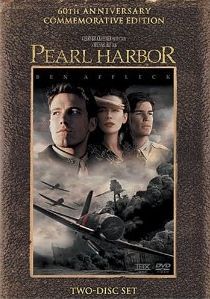 It's 1941 and America are yet to enter the war. Under much pressure from the European allies they decide only to send supplies. President Franklin D. Roosevelt wants to do more, stating that whilst the Europeans build bombs and bullets they are building refrigerators. The British are crying out for fighter pilots and a young pilot by the name of Rafe McCawley is eager for some action. Leaving his girlfriend Evelyn and best friend of many years Danny Walker, he heads to England.

There's no doubting McCawley's skill in the air and he's soon notching up the German kills. Rafe's luck won't last forever and it was only a matter of time before he met his match and the English channel. With Danny and Evelyn posted to Pearl Harbor it was only a matter of time before they became more than friends. Although Rafe was reported as dead, he is far from it and returns to Pearl harbour to be with Evelyn. Little does he know what's waiting for him.

With Europe in turmoil the Americans are starting to have there own problems. They are coming from the East in the form of an aggressive Japan. With Pearl Harbor holding the entire Pacific fleet they are a prime target for the Japanese after the American's cut off their fuel supplies. Whilst the diplomats argue with each other in Washington, the Japanese are assembling a massive fleet to attack and sink the fleet whilst it is anchored in harbour.

The picture is bright and colourful with a huge amount of detail and an impressively high bit-rate throughout the film. The sunshine location of Hawaii really brings out the quality of the picture and, although there can be the occasional problem with outlining, the picture remains artifact and imperfection free. It is definitely a film that should be promoted straight to your number one demonstration disc. Some of the camera work during the attack on the harbour is truly spectacular, but it does slightly distract from the true nature of the films background to more of an action film.

The sound is absolutely superb with a stunning dramatic musical score. During the many flight and battle scenes the surround channels are hardly ever idle with shrapnel, explosions and aircraft flying overhead to the rear channels. The thump of LFE's is ever present during the many, many explosions and the dialogue is crystal clear in the centre channel with some good stereo steerage at the front. Both the Dolby Digital and DTS soundtracks are awesome, although the DTS separation wins through yet again.

On the more bizarre front there is also a Dolby Digital headphone audio soundtrack. While no doubt its a good idea for in-flight movies or personal DVD player it seems a little useless on this DVD. This is all the more evident when you consider that there are also Dolby Digital and DTS soundtracks taking up valuable space and ultimately causing the film to run onto a second disc. The fact that the region two edition lacks the DTS soundtrack enables the entire film to be accommodated on a single disc.

The menu system is basic but never the less impressive. There's a nicely animated introduction and cut scenes from the film. Each sub-menu will display another cut scene from the film a haunting musical score. It all seems to lower you gently into the film. It's all very classy.

With the film being over three hours in length there's no room for the extras on the first disc so they appear on the second. For a two disc set the extras seem a little disappointing and for a film that struggled at the box office you would have thought it would be packed to the hilt with extras.

Whilst the Making Of documentary is interesting enough it goes on too long and spends too much time patting itself on the back. The most interesting extra is the History channels Unsung Heroes documentary. Like Saving Private Ryan the documentary is far more harrowing that the film itself especially when you can see real footage from that fateful day and the people involved. It's rounded off by the usual trailers and a hideously boring music video.

It's all presented in a decent set of packaging. Whilst some distribution companies think that a fold out paper case that will fall apart makes a special edition, Buena Vista have taken another approach. Whilst the case is still paper it is a much more robust material and the plastic innards will ensure that this disc set will last for many years.

If you can skip past the first twenty chapters you end up with a decent film that is a cross between Titanic and Saving Private Ryan. I only intended to have a quick look at the attack on Pearl Harbor but I so engrossed with what was happening I ended up watching the entire film. Even skipping the first forty minutes or so the time just flew by. Not many films can do that to me and I felt that the criticism aimed at the film was somewhat unjustified.

You can definitely see where the money has been spent with some stunning visual effects that are almost as harrowing as Ryan. You can literally see the millions of dollars going up in smoke before your eyes. If you discount the mush of the love story and focus on the films historical background you end up with a great film. For that reason I can't rate it high enough.

If you thought that this film couldn't be any longer than three hours then you'll be interested to learn that there is a four hour directors cut. Whilst Ryan went straight for the throat with its blood and guts, Pearl Harbor has more of a sterile feel to it. Hopefully the director's cut will address this issue with a more graphic attack on the harbour and less of the mushy love tale.