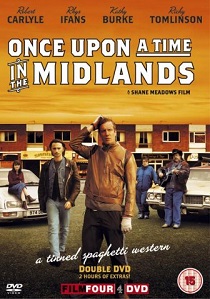 Dek lives in Nottingham and is a bit of a wimp. He has two passions in his life - his heavily customised Ford Sierra, which he's nicknamed Baby, and his girlfriend Shirley. Dek is also the step father, and father figure, to Shirley's twelve year old daughter Marlene. Dek really wants to make a honest woman of Shirley and decides that he's going to pop the question, but not in any ordinary place.

Shirley's best friend Carol is appearing on a day time chat show complaining about her estranged husbands total obsession with country and western music. Shirley has tagged along for moral support, but is shocked to see Dek approaching her live on stage. Dek, in front of millions of viewers, proceeds to get down on one knee and propose. Unfortunately, his loving speech is of no use as Shirley turns him down.

Mortally wounded, Dek is left to return to Nottingham to think about his embarrassment and his future with Shirley. Meanwhile back in Glasgow, Carol's foster brother Jimmy, and father of Shirley's daughter, has witnessed the events unfold on live television. Sensing that their relationship could still have a future he decides that it is time to reclaim his family. Mind you, it's a family he walked out on in order to pursue his life of crime.

As a result Jimmy packs in Glasgow, double crosses his fellow gang members and heads for Nottingham. But its not long before the gang realises they've been conned and they too head south in order to track him down and reclaim their recent robbery booty. It's all heading for a final showdown between Jimmy and Dek. Trouble is, with his gang members on his tail and Dek determined to get his girl, its not going to be the push over Jimmy thought it was going to be.

The picture is bright and colourful with a reasonable amount of detail. If anything, the overall picture quality would be the sort of thing you'd expect from a television drama shown on terrestrial television. The bit-rate remains fairly average throughout and there are no signs of any artifacting or outlining. The only real downside would be the occasional problem with grain.

Again, the sound is something you'd get from a television drama. It's nothing special, but its more than adequate for the films genre with little or no use of the effects channels. However, the dialogue is crisp and clear and there's never a need to keep adjusting the volume.

The disc reviewed here is the rental version and as a result there are no real extras. I'm assuming that once the disc gets its retail release it will have a bit more to show for it than a hideous collection of trailers for extremely embarrassing "straight to video" films, including one staring Mathew "I'm not Chandler" Perry and Liz Hurley.

This is a great British film which is well worth a viewing. It's wonderful to see a British take on the many western films where a loner, usually a bandit of sorts, swaggers back into town to win back his lost love, only to find a fight on his hand. It's got it all, including some wonderful British humour and superb acting all round. However, it is the gritty performance from Kathy Burke that takes the biscuit - it's certainly a far cry from her "Harry Enfield" days as "Waynetta Slob".

Unfortunately, with the demise of Film Four, films such as these will soon become far and few between. It's a great shame for the British film industry - which now appears to be only able to produce comedies staring Hue Grant with American money for a largely American based audience. Just where did we go wrong? Perhaps we now should consider using more lottery money for our film industry rather than providing outlandish grants for one legged lesbians from Loch Ness, or is that me being too un-PC?