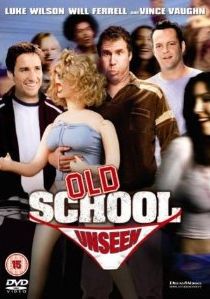 When Mitch comes home early from a seminar to find that his nymphomaniac girlfriend Heidi is cheating on him he decides to pack his bags and move into a house right next to a college campus. Meanwhile, Mitch's friend Frank "The Tank" Ricard has finally put his party animal days behind him and settled down with his new wife. Mitch's other friend Beanie has already settled down, has a young family and owns a chain of successful hi-fi stores. However, that's all about to change when Mitch's house is rezoned as student resident housing and in order to avoid being evicted they decide to form their own fraternity.

With Frank unwilling to let go of his wild days and Beanie longing to reclaim his time as a wild and crazy youth, well for a few hours a day at least, Mitch's new house soon becomes one of the hottest spots on college campus for parties, stunts and naked wrestling. But in order to have a proper fraternity they need to initiate some new members. After putting on one of the hottest ever parties on campus they they invite a variety of college students, sad middle-aged men and an ex-sailor who's pushing 80 to join and create a fraternity which everyone wants in.

Unfortunately, the new Dean of Students, Gordon Pritchard, knows the three from their college days and still holds a personal grudge against them. When the Dean boards up the house, evicts Mitch and expels any students who are members of the fraternity, the group have no other choice but to make their fraternity official. Mitch, Frank, Bernard and their dedicated fraternity members are forced to go through all the enrolment motions including mathematics, debating and physical education. Not bad for three blokes who left college over 10 years ago!

The picture is bright and colourful with some good flesh tones and a high level of detail and texture. The bit-rate remains above average throughout and there are no signs of any artifacting, outlining or graininess. The picture is also free from any dust specks or scratches. The only time there appeared to be any problems with the encoding process was towards the end of the film when Frank was dancing (don't ask!) with a long red ribbon. The fact that there was a fast moving red object on the screen was just too much for the DVD and resulted in some colour bleeding in an otherwise near perfect picture.

The dialogue is crisp and clear in the centre channel with no signs of cross channel bleeding whilst the other channels remain rather quiet throughout. The only time the surround channels came into life was whenever the musical score kicked in, especially during the house warming party with Snoop Dogg's rap. Other than that there was precious little else to give your surround system a workout. However, for a film of this genre it can be forgiven.

The menu system is cleverly animated and scored, including nearly every sub menu, and if there was ever a menu system to grab your instant attention then you can't to much worse than the two lovely ladies relieving themselves of their tops. As the for extras, there's enough to keep you occupied for a whole semester. There's a number of television spots, outtakes, deleted scenes and a photo gallery. Also included is a commentary track by the director and the three principle actors. If you look hard enough you'll also find a couple of Easter eggs on the menus which once found will give you a deleted scene and Snoop Dogg's "uncut" party rap.

Old School is the latest comedy film from director Todd Philips. However, unlike his previous effort Road Trip this is about as funny as an abscess. With the majority of films being made for the American market they naturally cater for their own, and Old School is a particularly good example. If you are unfamiliar the American college campus traditions of the fraternity house and its initiations you'll be very confused of the goings on, not to mention jealous when comparing your own student parties with theirs. As a result the jokes become more of an American "in thing".

I wasn't quite sure what to expect from this film and when I noticed that Seann William Scott was amongst the cast list I ended up anticipating something alone the lines of American Pie or Road Trip. Unfortunately, it was neither and I spent the whole film waiting for something funny to happen. Even the outtakes aren't funny. It's definitely a case that if you've seen the trailer then you've probably seen the majority of the funny bits too. It may be because of my rapidly advancing years, but I think I'll pass on this one thanks.