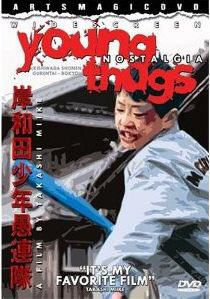 Set in Kishiwade, a fishing district in the Japanese industrial town of Osaka, Riichi is a young 6th grade student who is gradually emerging from the magic of childhood and into the violent world which will set the tone for his future. His life has hardly has the best of starts, and with a father that constantly drinks and beats both him and his mother, it's not hard to see why his mother has left them more than once. Needless to say, Riichi is use to fending for himself.

Although he is more than capable of looking after himself, when Riichi returns home covered in cuts and bruises after a beating from a gang of thugs, his father is over the moon that his boy has finally become a man. Calling for a celebration, all of the locals descend on the house and much Sake is sampled. Even Riichi ends up a little worse for wear and his hung over appearance attracts the attention of his teacher.

But Riichi's life is not always one of violence or survival of the fittest as being set in 1969 there is something in sky which is attracting the attention and the fantasies of everyone. With Apollo 11 heading for the moon Riichi and friends decide to make a replica of the lunar module in order to win a school contest and get some paints for their grandmother. However, although they proceed with hearts of hold, with no money to buy the materials for their construction, they end up stealing all of the materials anyway. Still, it's all part of the character building process and it all helps lay the foundation stones for their future. I wonder what awaits them?

Unlike the release of Young Thugs - Innocent Blood the transfer here is actually quite good and, other than the luxurious and big budget production of Sabu, it could well be one of Taskashi Miike's best film transfers to date. The colours are much richer and more detailed than the previous release and, whilst grain can still a bit of a problem, it is far less of an issue and results in a much sharper and well defined image. Sure, the transfer still suffers from the occasional dust speck and other picture imperfections, but on the whole it is not too distracting and is no more of a problem then some of the bigger Hollywood productions.

The film is equipped with a 192 Kbps Dolby Digital 2.0 and 448 Kbps Dolby Digital 5.1 soundtrack, although in a rather bizarre twist, the two channel soundtrack is the default selection. Naturally, unless you understand Japanese the subtitles are a bit of a must so the actual audio quality is fairly low down the priority list. Still, seeing as this is not an action movie there is no real need for anything special from the sound. Never the less, it is more than satisfactory for its needs and the dialogue is crisp and clear enough in the centre and front channels. Although the rear channels are used throughout there is no imagination to the soundtrack and it is more or less a repeat of the front stereo channels.

After a brief introduction the main menu becomes static but scored. The menu system is pleasantly designed whilst the static and silent submenus are easy to select and navigate through. Although it's not on par with Artsmagic's usual offerings, nor the DVD release of the sequel Young Thugs - Innocent Blood, the extras do help to add some much needed value to the disc.

The main extra is the fourteen minute interview with the forever sunglasses wearing director Taskashi Miike. The interview is split into a number of question and answers and is conduced in Japanese so those trusty optional subtitles will certainly be needed. Unfortunately, the questions are not chaptered so you'll have to work your way through the entire interview. Still, the interview is informative enough and you'll pick up plenty of information about the two Young Thugs films and working with the various cast members. Still, it's not as interesting as the interview on the related Young Thugs - Innocent Blood release.

Carrying on from the Young Thugs - Innocent Blood release the nine minute Osaka People featurette looks at the people and culture of Osaka. Written and presented by local Osaka resident Takako Tucker and presented in English, together with a selection of pictures throughout its history you'll learn all sorts of information about the city. If anything, it is more interesting that the previous Osaka History and Culture featurette and it will be of interest to anyone wishing to visit and understand the culture of Osaka.

The Original Sleeve VHS artwork is also shown and being in its native Japanese there is some serious amount of translation required. So in Artmagic's usual wonderful and informative manner, and as with DVD previous releases, three sections of the cover can be highlighted and then translated into its equivalent English. There's the usual bit of filler material with the Original Trailer whilst there's some textual Biographies and Filmographies of two of the actors as well as substantial background information on director Taskashi Miike. Whilst these last two features are hardly ground breaking stuff, they all do help to add value to the disc.

The Innocent Blood and Nostalgia films are part of a series based on the semi-autobiographical novels of Riichi Nakaba, who incidentally plays the role of the practically invincible heavy Kaoru in Innocent Blood. The first film had been directed by Kazuyuki Izutsu, but Miike accepted the commission to do a "sequel" on the strength of being promised that he could come to the project without any preconceptions of the part of the producers and have total artistic freedom. There's no doubt that the theme itself attracted him greatly plus the fact that the film is based in his home town of Osaka.

Director Taskashi Miike claims that this is his favourite film. And I would have to agree with him here as, unlike the vast majority of his films, the violence is kept to a minimum and there are no real signs of blood or gore. There is the occasional fight scene, and to be honest no Taskashi Miike film would ever be complete without one, but the resultant cuts and bruises are much lower key than most of his other films. This allows the film to concentrate on the characters and the delights of childhood with less time and effort being spent on the madness and mayhem that usually accompanies a Taskashi Miike film.

Taskashi Miike fans will have no hesitation in snapping up this film, but if you are interested in Japanese cinema and you ever needed a starting point for exploring the world of Taskashi Miike then Young Thugs - Nostalgia is the perfect start. And if you put this together with its sequel Young Thugs - Innocent Blood, and the fact that Artsmagic can consistently produce the goods, you can be gently eased into his wacky world of fights and quirky comedy that the Japanese simply adore. Highly recommended.