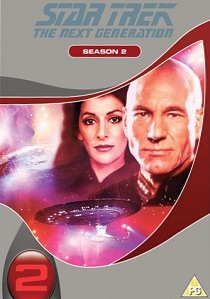 Star Trek: The Next Generation - Season 2

Its 2365 and the new captain and crew of the Enterprise NCC 1701-D continue their mission to seek out new life and new civilisations. Their journey will bring them up against new and familiar adversaries, introduce a new senior officer and offer new challenges from other races. Launched in 2363, it is the fifth Federation starship to bear the name Enterprise. Twice as big as the original, the "Galaxy-class" Enterprise-D carries seven times as many crew and has a vast array of armaments. As they explore the galaxy they will encounter both friendly and hostile aliens testing both Captain, crew and the human race to the fullest.

Captain Jean-Luc Picard is arguably Starfleet's finest captain of the 2360's. An intelligent and skilled negotiator and tough opponent in battle, he is dedicated to his ship, crew and the prime directive. Commander William Riker provides alternative opinions for the Captain. He challenges some of the Captain's decisions and offers alternatives. Riker leads most of the away teams whilst the Captain remains onboard the Enterprise. However, he's going to have trouble stopping the Captain venturing out this time around.

Lieutenant Commander Data is a unique super-intelligent android who was created by Dr. Noonien Soong. Data was designed to be as human as possible, but no matter how powerful and complex his positronic brain is, Data is unable to comprehend emotion. Data is going to be in for a shock as Starfleet wants to disassemble him and see how he works. Commander Deanna Troi is this ship's counsellor. Troi has the ability to feel the emotions of the people around her, making her opinions extremely important during sensitive negotiations and stand-offs. She even manages to become pregnant without even being party to it.

The picture is of a fair quality, but for a television series this is not too unusual to see. However, it is a slight improvement on the first season with a picture which is soft with too much contrast and lack of rich colours. Never the less, it is still superior to what ever video could have offered and there's no signs of any problems with artifacting or pixelisation.

The menu system is in keeping with the general Star Trek styling with fonts and displays similar to the computer control systems on the Enterprise. The main menu is scored with the theme music and there's a few cut scenes from the discs episodes playing in the corner of the screen along with a rotating schematic of the Enterprise. Once an episode has been selected a similarly designed, but static, menu appears offering the various language options and chapter selections in the usual Star Trek jargon. The menu is also accompanied by a number of computer bleeping and burbling sounds that soon became rather annoying.

The disc set is presented in an excellent, but rather flimsy, paper foldout set with some great artwork. If the paper case is weak, over weight and prone to falling apart then Paramount have place the whole lot in a gray plastic box. Once the entire set has been collected it will certainly look impressive on your bookshelf.

Unfortunately for Paramount and the cast of Star Trek, a writers strike in Hollywood caused the season to be cut short to twenty two episodes, and even one of those is the dreaded clip show. As a result season two is cut from the standard seven to six discs. However, with the drastic reduction in content there has been no reduction in the cost of the disc set. To make up for the loss of the disc those nice people at Paramount have provided a spare paper slot in its place for you keep something or other.

With the Enterprise and its crew firmly established the second season no longer has to spend most of the time establishing the various characters and finding its way in the galaxy. As a result the episodes are vastly improved and they even manage to touch on a number of important topics and even manage to have a laugh. The budget also seems to have been increased as the scenery and various costumes appear to be much improved, even if there's still a bloke dressed in a dodgy monster suit.

Although the Enterprise flyby special effects are the same as the first seasons there are a number of additional scenes containing various battles and other space ships. However, from the information revealed in the first season about the special effects I am unsure whether these are all computer generated or trusty bits of plastic and polystyrene.