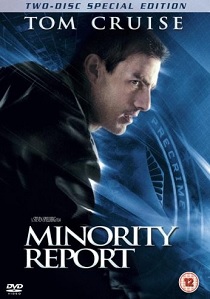 The year is 2054 and for the past six years Washington D.C has been murder free. This is all down to three unique and genetically modified clairvoyants who can see where and when a murder is going to be committed. Once the perpetrator is identified the pre-crime squad, headed by Chief John Anderton, is dispatched to intercept and detain them before the crime is carried out. It all works exceedingly well, the system is flawless and there are plans to role it out countrywide.

When the clairvoyants identify that another murder is going to be committed in the city, John Anderton springs into action and heads to the control room to make sense of their visual information. However, John is in for a shock when the images he sees are his own killing a man he's never met and in a place he's never been before. Surely this infallible system is wrong and he's not really is going to commit a murder? Fortunately, he still has friends within the organisation and they allow him a small amount of time to escape before the alarm is raised.

John is going to need to utilize all of the tricks of the criminal underworld, including a drastic surgical procedure, to avoid detection from the pre-crime squad and the vast resources at their disposal. With the net closing in around him the clues are starting to indicate a conspiracy to cover up a "minority report" which will cast doubt on the whole project. He has just 36 hours to discover who set him up before the system he helped to create puts him behind bars.

The picture transfer is near perfect with a high bit-rate throughout the film with no signs of any artifacting. Due to the blue bleaching process it would be hard to herald it as wonderfully rich and colourful picture, but the detail is superb and what colours are allowed to bleed through are well defined, vibrant and exhibit no signs of edge enhancements or outlining. This bleaching method also seems to improve on the special effects. Whilst many of the recent big budget films have relied too heavily on CGI, Minority Report seems to have the balance right and when it is used it blends in perfectly with the surround scenery. Is this the wonder of the Spielberg touch again?

The sound is excellent with near continuous use of the surround channels, so much so that after a while you actually forget you're enveloped in total sound. The dialogue is crisp and clear in the centre channel and with the action happening all around you there's never a need to correct the volume level, either to hear the dialogue or keep the neighbours happy. The LFE channel is also not neglected with plenty of low thumping bass to clear off the cobwebs. It's just what an action film should sound like. There is little to separate the two sound formats, but the superior separation offered by the DTS soundtrack will always get my vote of approval.

The menu system is wonderfully animated and scored with the same dark theme seen in the film and each submenu is either scored, animated, or both. With the films long running time and its dual Dolby Digital and DTS soundtracks the extras have found themselves on their own disc. And what a vast and interesting collection they are too, with the section on the wizardry of ILM being my personal favourite.

Naturally, with Steven Spielberg at the helm they are detailed, interesting and, unlike some DVD releases, don't feel like padding material. Also included are Production Notes, a Stills gallery and Theatrical Trailers. It's just a shame that Mr. Spielberg again fails to deliver an audio commentary, but the collection of extras presented here more than makes up for its omission.

What a brilliant and dark vision of the near future this film is. It's a definite nod to that classic, and Spielberg favourite, Blade Runner with some subtle comedy moments that only he'd dare to add. Whilst the idea of people seeing future crimes is a little far fetched to say the least, this film is a futurists dream and so much of it is a tantalising near reality. There's 3D holographic televisions, retina scanners for identification, tiny in the ear telephones, dynamically updating newspapers plus the most amusing, and annoying, idea of personalised holographic advertising. Every street and shop you go into they greet you and announce special offers and reminders. The horror of things to come perhaps?

Mind you, predicting future crime would certainly come in handy in these modern times. Unless you are the notorious motorist criminal exceeding the speed limit by 1mph or parked on double yellow lines while you post a letter, any help in preventing the never ending increase in crime would definitely be welcome. But I guess that's a futurists dream one to many, although any help in picking the winning lottery numbers would certainly be appreciated.

As the for the film, it was certainly overlooked at the cinema and hopefully this will be rectified on DVD. Whilst there was wide ranging criticism of Minority Report it still has to be rated as one of Spielberg's finest efforts. The film is not all happy with puppies and fluffy kittens but a dark analysis of the present and future. Perhaps this was its theatrical downfall as people were just expecting an all no brainer action flick. Do yourself a favour and get, in my humble opinion at least, one of the films of 2002 on DVD.