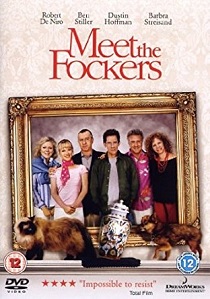 Having finally won over Jack Byrnes, the ex-CIA agent come flower seller, and entered his "circle of trust", all is well in the land of Gaylord "Greg" Focker and wife to be Pam. In fact, things are going unusually well and days before the pair are due to travel to Florida to allow Jack and Dina to finally meet his parents, Nurse Gaylord has even managed to deliver his first child at work. But Greg's nerves are starting to return as they prepare to meet up with Jack and Dina before finally travelling onto Florida for the first family meet and the discussion of the wedding plans.

As Greg and Pam head off to the Byrnes family home this surely has to be the start of a multitude of disasters that would test anyone's state of mind. But no, it all works out wonderfully for the pair, and where previously everything had plotted against him, everything is strangely going to plan. That is until they reach the Byrnes home where they discover that Jack is baby sitting his grandson, by his other daughter Debbie, while she is away on holiday. As a result "little" Jack, and Mr. Jinx the cat, will be joining them on their trip. However, they won't be flying as planned, but driving down to Florida in Jack's new RV. But obviously, this is no ordinary RV, nor is Jack any old babysitter, and being a bit of a fickler for timetables and routines this can only mean plenty of mishaps on the journey ahead.

Greg is wise to be worried as to what Jack will think of his parents as his mother is a sex therapist whilst his father is an ex-lawyer and a bit of hippy. Naturally, these are hardly the best traits to have in parents and that circle of trust is looking a little shaky indeed. Still, by asking his parents to hide their eccentricities for a just few days could make all the difference. But naturally, his best laid plans soon start to fall apart and with more mischievous antics from Jinx the Cat, an overly zealous game of touch football, a saucy Cuban caterer with a secret and a mishap with a toddler and glue, it's not too long before there's a kink in the Byrnes's family chain and normal chaotic Focker service is resumed.

The picture is bright and colourful with a good level of detail and depth throughout. Given that the majority of the film is set the rich and lush landscape of Florida there's plenty of reds, greens and other bright foliage colours on show. All of this is handled with ease with few signs of outlining or artifacting whilst both night and day time black levels are solid and offer an above average bit-rate throughout. With the film being such a recent theatrical release the transfer is clean with no problems with dust scratches or other picture imperfections.

Whilst a large amount of Universal titles have been released with both Dolby Digital and DTS soundtracks the last few major releases, such as The Chronicles of Riddick and Wimbledon have seen the DTS track omitted from the line up. And yet again, and unlike the original Meet the Parents release, we have another Universal release which is only equipped with a 448 Kbps Dolby Digital soundtrack (albeit dual English and Hungarian). Whilst this is not a problem in itself, with the film hardly calling for anything special in the sound department, it's beginning to become a bit of a worry as where they once led the way, things have started to slip. So come on guys, don't forget the DTS soundtracks in future!

Never the less, the Dolby Digital soundtrack supplied here is more than adequate to meet its needs. With some clear and precise dialogue in the front and centre channels it's very easy to hear the goings on - pretty important when you're laughing so much! Still, even given the genre of the film and its bias towards concentrating on the dialogue, the surround channels are criminally underused, and only then by the musical score. And worst still, the LFE channel appears to have gone off for a holiday to the Everglades, although, again, given the subject matter you'd hardly be expecting room shaking bass.

The menu is scored and animated with various cut scenes from the film and there's a nice animated transition between the menus. However, once you select a sub-menu it becomes a static and silent affair. Still, at least things are simply laid out and it's easy to navigate through the menus. Meet the Fockers is also accompanied by a reasonable selection of extras, although one or two of the features are a little on the poor side and whiff ever so slightly of padding material.

The main extra is the Audio Commentary with Director Jay Roach and Editor And Co Producer John Poll. As the pair have already worked together on the first film they are "old pals" and they clearly get along with each other. As a result, the commentary track is an interesting one with plenty of information about the cast members and the production process. It's not a continuous stream of information, with plenty of silent moments as the pair watch the film, but on the whole it's a worthy listen, if only to hear about De Niro and his improvisation skills. In another useful feature, if you'd rather enjoy the film without any audio interruptions then you can also view the commentary as subtitles.

The first of the many features is the Behind the Scenes with the Jinx the Cat featurette. Running at just over four minutes it's a rather pointless look at Mr. Jinx and how the cast, including the dog, and crew reacted to being in the presence of such "greatness". I had hoped on some technical know how on how the trainers went about getting the cat to perform the various tricks, but alias it was a big disappointment. Next up is the equally disappointing and short The Manary Gland featurette. Running for a mere three minutes it looks at how the style of fake breast was picked and molded. I bet it was a really arduous task having to sift through hundreds of pictures of breasts that day!

In the five minute The Adventures of a Baby Wrangler featurette, the impressive skills of the two twins, Spencer Pickren and Bradley Pickren, who played little Jack in the film are examined in a little more detail. I was astounded to see just how well they acted in the film and it's quite interesting to see just how their teacher managed to get just what they wanted from the littlest members of the cast - and not forgetting little Jack's famous first words. Next up is the The Fockers Family Portrait section. This menu allows you to select either Dustin Hoffman, Barbra Streisand or Ben Stiller characters and then watch a short interview about their character, plus a few a clips of behind-the-scenes footage. Although it's rather pointlessly split into sections and far too short, running for about five minutes in total, it's still an interesting look at the actors involved in the film.

In the eight minute An Interview with the Fockers, all the of cast members have been rounded up and stuck on a sofa for an interview. It's great to see all of the cast together again, although why Robert DeNiro bothered to turn up is anyone's guess, as his usual minimal amount of input is a big disappointed. However, most of the eight minute interview is controlled by Dustin Hoffman and Barbra Streisand. The pair are clearly great friends and with all of their ribbing and giggling they could almost still be in character. Ben Stiller is also on hand to provide a few nuggets of information, but both Blythe Danner and Teri Polo's input is so minimal I can't actually recall them saying anything of interest. Still, it's not too often you can get all the of cast together in one go for interviews so it's still worthy of a look in.

Running for around sixteen minutes, the montage of Deleted Scenes is made up of around twenty scenes, some of which are deleted, whilst others are extensions to existing scenes. As usual, the director appears to have made the right choice in removing and trimming the scenes, although there are still some funny scenes - usually with DeNiro in them, but it's great to see them included here. Next up is the eleven minute Blooper reel. Although I'm usually suspicious of any outtakes which are simply made up of actors laughing, for the sake of seeing the normally level headed DeNiro failing to keep a straight face, I'll have to make an exception to the rule. Things are rounded off with the Theatrical Trailer for Lemony Snicket, although in a bit of an oversight there are no signs of any trailers for Meet the Parents or Meet the Fockers.

Having previously enjoyed repeated viewings of Meet The Parents on both DVD and television the film had become a bit of a disappointment. However, this could simply be put down to the fact that after appearing in a host of poor comedy films, such as Zoolander, Along Came Polly and Dodgeball, I was getting rather fed up with the antics of Ben Stiller. As a result I had become a little hesitant when it came to reviewing Meet The Fockers. However, I needn't of worried as it is one of the funniest films I've seen for a very long time. And it's not as if the script is refreshingly funny (the plot thread is so close to the original film it is uncanny) or that Ben Stiller had suddenly rediscovered his funny bone.

No, it's all thanks to the wonderful pairing of Dustin Hoffman and Barbra Streisand and the fact that everything and everyone simply flows off them with comic ease and hilarity. Without them I think this film would have fallen flat on its face, and possibly brought Stiller's film career to a crashing end. But director Jay Roach has managed to play an absolute blinder by getting these two film classics to sign up and the laughs flow in abundance whenever they are on screen together. Put this all together with Robert De Niro seemingly finding the perfect niche role in the comedy segment and you're already onto a sure fire winner. Highly recommended.