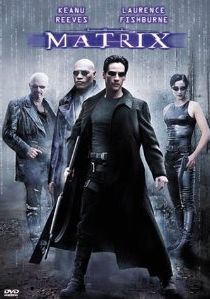 This release of the enormous 1999 Sci-Fi hit of the year gains its debut on region one, and what a release! As usual Warner Brothers doesn't disappoint when considering the extras and the quality of the encoded film.

The story hinges around 'The Matrix'. And Neo has been searching for the answer to the question as to "What is the Matrix". Through the film Neo meets Morpheus, a rather reclusive figure, who guides Neo through various tests to ready himself for the dramatic conclusion. Morpheus has already determined the answer of the Matrix and now seeks the final destruction of it, and equips Neo with the knowledge as to how this can happen.

Starting with the film itself, the image bit rate meter rarely lets up below 6mbits/sec, and the 5.1 Dolby Digital soundtrack does not disappoint. The image is presented in the conventional 2.35:1 ratio and is anamorphically encoded, thus allowing the full visual impact to be watched on suitable 16:9 equipment.

Many of the stunts arranged within the film are actually performed by the actors themselves, and this gives a great feeling of authenticity when the action sequences start. To this end, all the actors were sent on a training course of six months duration to learn martial arts. This dedication to the film shows, and the action scenes are unparalleled in any other film to date.

A heavy use of effects transforms this film from the norm, to the truly exceptional. The main sequences when armed combat occurs show a new 'bullet time' science fiction effect whereby bullets are slowed down to show a greater impact of the perception of speed. To enhance these impressive scenes, the camera is rotated 360 degrees around the subject whilst the action is ongoing.

The soundtrack has extreme use of the .1 LFE track especially during scenes where military hardware is used. The part of the film using the B-232 Attack helicopter comes to mind, and the bass from the 20mm belt fed cannon is noteworthy. Elsewhere the music is blended in and enhances rather than distracts from the ambience of the film; the part of the film with the shoot-out in the lobby proves this point as a thudding bass of a propeller heads track is used to great effect.

The DVD extras set a new level of interactively, the best use of seamless branching has been shown to work effectively. When selecting the option 'follow the white rabbit' the film will restart and show a white rabbit icon on the screen when extra materials are available to view. Most then branch to another track showing how the special effect has been done.

Unfortunately due to the complexity of this DVD, some players notably the Samsung, have problems with the seamless branching of the disc. Other extras include the complete website on the disc, and allows viewing of the screenplay and storyboards amongst other items.

The R2 version is now available, but has suffered the indignity of pre-cutting by Warner to get a certificate. This means that the R2 version does not have the head butting scenes, and the directors commentary track has been removed. And yet again the BBFC can say quite candidly that it did not have to remove anything from the film.

Overall a truly superb movie with groundbreaking effects and a completely different storyline. The Wachowski brothers have found a new way of breaking the Sci-Fi mould and have pushed back the envelope of new and thought provoking films.