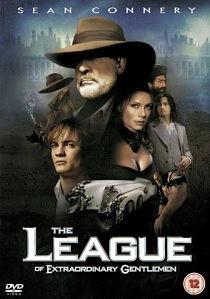 The year is 1899 and the world is fast becoming a dark and ominous place. War seems inevitable. But there is still a chance of peace and the world leaders are due to gather in Venice to discuss their differences. However, a mysterious megalomaniac called "The Fantom" is deliberately provoking tensions between Germany and England by carrying out raids on the Bank of England and the new airship yards of Germany. For war will be a highly profitable business for the "Fantom" and his huge array of highly advanced weapons ready to be sold to the highest bidder. Naturally, world peace is the last thing on his mind.

With the British government desperate to maintain peace, an agent is sent to Africa to locate and bring Britain's greatest adventurer, Allan Quatermain, back home. Once back in London Quatermain attends a secret meeting where he learns that he is to lead a team of extraordinary figures with legendary powers. He is introduced to Rodney Skinner, an invisible man who used his talent to relieve people of their property, the infamous Captain Nemo and, thanks to a visit from Count Dracula, vampiress Mina Harker. And with the Americans providing special agent Tom Sawyer (he must have become fed up of whitewashing picket fences and pinching apples) the rest of the team is up to Quatermain. So after signing up an immortal named Dorian Gray the newly formed league head for Paris to capture Mr. Hyde and his violent alter ego Dr. Jekyll.

The leagues assignment is a simple one. Track down the Fantom and prevent him and his band of heavily armed thugs from sabotaging the peace summit in Venice. The team must put their past differences aside and learn to trust in each other in order to defeat the evil that is threatening civilisation. The problem is that they only have 9 hours left in which to do it. Fortunately, the league don't just have to rely on their strange powers as Captain Nemo is providing the transport. So with a strange new contraption called an "automobile" and an elegant submarine called the Nautilus, they are soon hot on the heels of the Fantom.

With the film based on a dark and graphic novel, it's is great to see that the film uses the same dark and subdued lighting and colours in a similar manner to the Batman films. As a result the DVD is given the extremely tricky task of controlling the huge array of black levels. Fortunately, it takes everything in its stride and there are no problems with either grain, pixelisation or edge enhancement. It even manages to reproduce a wide range of rich and vibrant colours along with some excellent flesh tones. And if that wasn't good enough, the transfer is near perfect with no signs of dust scratches or other picture imperfections.

The film is presented with both Dolby Digital 448Kbps and DTS 768Kbps soundtracks. Both formats offer an exciting and dynamic array of surround effects, a multitude of ground shaking LFE effects and some crisp and sharp dialogue in the centre channel. The League of Extraordinary Gentlemen is the sort of film that truly thrives on the sound, so in order to really enjoy it you need to buy your neighbours a set of ear muffs, pack off the missus to the shops and really crank up that volume. It is also the perfect soundtrack for comparing the two competing sound formats. And yet again, the superior separation and better dynamics of the DTS soundtrack ensures that it wins without having to put up any real fight. I'm sure this film will be used in home cinema demonstrations up and down the land for years to come.

Many films of late seem to have played it safe and provided some very uninspiring soundtracks, perhaps choosing to reduce the soundtrack dynamics in order to fit everything onto one disc. However, Twentieth Century Fox have thrown this rule book out of the window by choosing to retain the exceedingly high picture and sound quality and farming off the wealth of extras to a supplemental disc. However, if you're not interested in the extras then you can purchase a much cheaper single disc edition of the film.

The menus on both discs are nicely animated and scored with the various characters appearing and dissolving on the screen before each easy to navigate through menu appears. And if you've any sense about you, you'll completely ignore the single disc edition of The League of Extraordinary Gentlemen and head straight for the double disc special edition. It may cost a few pounds more, but it will be money wisely spent. Without the additional disc of extras the standard edition spirals into hole of mediocrity that is so deep it will be destined for that horror of places known as the "bargain bucket".

The only extras on the first disc are the two audio commentaries. The main, and slightly better of the two, light hearted commentary is provided by producers Don Murphy and Trevor Albert and actors Jason Flemyng (Dr. Jekyll), Tony Curran (Rodney Skinner) and Shane West (Tom Sawyer). Naturally, Sean Connery would never dream of sinking so low as to provide a commentary track. The second more technical audio commentary is provided by Jacqueline West, John Sullivan and Matthew Gratzner. It's not very often you get two good commentary tracks, but both provide a decent insight and range of information about the production. It certainly all helps when you start looking at the featurettes on the second disc.

The second disc is sensibly split into three different sections; Pre-Production, Production and The Release. The Pre-Production section has a reasonably interesting 10 minute featurette on the CGI effects and the pre-visualisation techniques that helped to save the production money by setting up various scenes and camera angles in the computer to see how they would play. The section also contains a stills gallery and a pile of sketches and designs for the various gadgets and gizmos.

The Production section is by far to most interesting of the three. The main part of this section is the extremely interesting 54 minute production featurette Assembling The League. There's plenty of on-set interviews with the cast and a huge amount of information on the massive sets, the surprisingly large amount of models used during production and an in-depth look at the time consuming make-up required for Jason Flemyng's Dr. Jekyll character. There's also 30 minutes worth of deleted and extended scenes. Some scenes are more interesting than others, but they offer little in the way of expanding the already threadbare plot. I suspect that the majority of the cuts were purely down to timing purposes. Still, nice to see them here.

The final Release section deals with the films promotion in the usual back slapping manner. It's nice to know that the European premiere was held in Prague but not that the 18 minute Behind the Fantasy featurette is presented by Andi Peters. And with Andi being "famous" for his work in children's television it is presented in the same manner as a condescending Blue Peter presenter. Not the best start to the PR material then. Fortunately, if you start loosing the will to live, you'll be glad to learn that most of this nauseating featurette already contains information covered in the other featurettes.

Mind you, the featurette for the London premiere in Leicester Square is not much better. Hosted by a bizarrely jolly Paul Ross, he tries to whip up enthusiasm from the (worryingly) small crowd. He manages to get a few words from the stars and is then pretty much ignored by an arrogant Sean Connery who tells Paul to divert his questions to his wife. It's all rounded off with a number of trailers, televisions spots and a range of PR posters from around the globe. All in all, the second disc adds much needed value to the package.

The League of Extraordinary Gentlemen is a real mess of the film. It spends far too long introducing the audience to the characters and then provides a story so weak you could have had a group of monkeys come up with a better plot. But, to be fair, you could draw some initial comparisons with the first X-Men film. After all, if you want to launch a franchise of films you have to introduce characters. But at least X-Men had a plot. Then there are the persistent rumours of on-set "differences" between director Stephen Norrington and Sean Connery (which, quite frankly, I can well believe occurred). And let's not forget the horrendous floods in Prague which not only devastated the city but wrecked half of their impressive sets. Cries of Waterworld echo solemnly into the night....

But it's not all stinging criticism. Whilst the CGI effects are hideously obvious, it is the good old fashioned make-up and massive sets that wins the day with the streets of London, Paris and Venice forming one of the biggest sets ever assembled in Europe. And boy, is the final result impressive, and without the benefit of that second disc of extras you'd have never known. And let's not forget that it took an arduous six hours of makeup and prosthetics to turn Jason Flemyng into his Dr. Jekyll character. Putting the poor storyline aside, with the amount of time, effort, attention to detail and energy put into The League of Extraordinary Gentlemen, it really does deserve an 'A' for effort.

Costing Twentieth Century Fox and absolute fortune to produce, it was vainly touted as being one of the summer blockbusters of 2003. Trouble is, it pretty much tanked. However, the medium of DVD is fast becoming an extremely important part of the monetary life cycle of a film. Indeed, a film can make more money from its DVD release than at the box office. So the question is, even with its total lack of storyline, will The League of Extraordinary Gentlemen be one of these films? Its fate is in your hands.

Extraordinary film it's not, but the original comic book and general fantasy fans may still find it worth a look in. However, rent before you decide to buy.