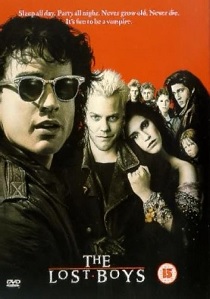 Unhappy at having to uproot and move to Santa Carla with their mother, Michael and Sam are eager to get out and explore their new town. However, things aren't as tranquil as they had been led to believe as the town is run down and rumours are rife of people mysteriously going missing.

Michael soon meets the beautiful Star, who is unfortunately the girlfriend of gang leader David. Eager to impress, he races them on his motorbike and is led through a strange initiation ceremony at their lair, drinking some strange liquid from a bottle. Unfortunately for him, he has unwittingly started to become a vampire and must soon feed his raging desires to kill.

Meanwhile, the youngest of the brothers, Sam, has been taken under the wing of the Frog brothers who are the owners of a local store specialising in horror comics. They soon tell Sam about the Vampires in Santa Carla and naturally he dismisses them until he starts to notice strange changes in his brother. He teams up with the Frog brothers, in one of the most amusing and gripping vampire battles you'll see, in order to defeat the gang before Michael kills and finally turns to a vampire. However, his mother is now dating Max the head vampire ...

The picture quality is only average, with DVD bringing out all the anomalies in the video transfer. However, this is made up by the excellent remastered soundtrack with the surround channel used effectively throughout the film.

This film is a change of direction from the traditional vampire film and is well directed by Joel Schumacher. By mixing horror, comedy and a rock soundtrack we get a fantastic piece of entertainment which has you reminiscing about the (hideous) eighties fashion and music scene.

If you've never seen this film before then it is well worth a viewing as it is one of eighties classics, just ignore those hideous clothes and hair styles. Just what were they thinking?!