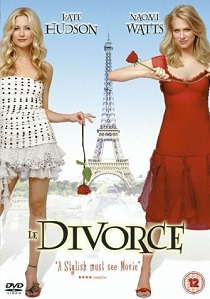 Isabel Walker has come to Paris for a holiday and to visit her sister Roxy who has married and settled down with Frenchman Charles-Henri. Roxy is expecting their second child and Isabel is looking forward to meeting the family and awaiting the happy event. But upon arriving at their apartment Roxy passes a suitcase laden Charles-Henri as he makes his way to a waiting taxi. It is only when she finally makes it inside the apartment that Roxy informs her that Charles had dumped her for a married Russian woman.

So with a divorce now in the air Isabel decides to stay for a while longer in order to help with the proceedings and finally take in some of the culture and charms of the Paris scene. Isabel is soon taken aback by the French cuisine and general attitudes to life and after agreeing to a lunch date with her brother-in-law's married uncle Edgar, she discovers that she cannot turn down his proposal to make her his mistress.

Meanwhile, things aren't much fun for the heavily pregnant Roxy. She is being hounded by the devastated partner of her husband's new girlfriend whilst simultaneously struggling with the hideously biased French law and the finer details from her break-up with Charles. The main sticking point is a bitter dispute as to who should hold onto a precious family painting and Charles's family are determined for it to stay in France. With both sides staking a claim on the valuable portrait, Roxy's family decide to pay a visit and the Franco-American battle really starts to hot up as each party attempts to get the upper hand. Will French tradition and culture, or American brawn win the day?

The picture is bright and colourful with plenty of rich colours and detail. The outdoor sights of Paris are particularly impressive with the sweeping vistas bursting with a rich variety of colours and razor sharp accuracy and no edge enhancements. Even the dark and gloomy side streets and interiors take on an impressive amount detail and still manage to produce a picture which, albeit soft at times, is free from signs of grain or artifacting. The picture transfer is clean with only a few noticeable dust scratches, mainly on the sweeping cityscape views, and the bit-rate remains above average throughout.

The sound is also just as surprising as the picture. Although essentially a dialogue intensive film, the surround channels are used to good effect with some pleasant ambient effects such as chirping birds and music. The dialogue is easily audible in the centre channel at all times and there is some reasonable stereo steerage in the front channels. The LFE channel remained stubbornly quiet throughout, although this can be forgiven as this film didn't require any earthquake inducing effects. All in all, a unexpectedly good all round performance

The disc is a bare bones affair with, other than 'scene access' - which in my book doesn't count, no extras whatsoever. The menu is an equally boring static and silent affair with nothing of interest to report. In fact, with a lack of extras to investigate the only thing you can do is select the 'play film' or 'subtitles' option. But, unless you speak fluent French, you may just want to investigate the subtitling options. You can either have the full subtitling facility for the hard of hearing or 'English text' for whenever those crafty French types start talking in their native tongue and you have no idea what they are talking about.

If you look at the cast list above you'll see that there is great set of supporting actors and actresses. I particularly liked the typically unphased Englishness of Steven Fry's character Piers Janely. I think he summed up the British attitude towards the French marvellously. Then there was the anti-American feeling and the way their food and television was slowing eroding French culture. Ok, so it was a deliberate thread of the film, but in a way it showcased France's declining influence in the world and their "Nero fiddled whilst Rome burned" attitudes to the rapidly changing world.

But as entertainment value terms Le Divorce is rather disappointing. Ok, there's no doubt that Kate Hudson, Naomi Watts and, especially, Matthew Modine act their parts brilliantly, but it is overly long with such hasty completion you'll be left wondering just what the point of the past hour and a half was. Another downside to the film is that, although touted as a romantic comedy, there was little to laugh at or melt you heart.

Fans of Kate Hudson will probably be happy, but with the total lack of extras, the rest of us may just want to leave this one on the shelf.