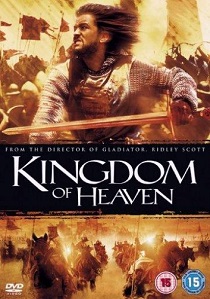 The Kingdom of Heaven: Special Edition (2005)

Blacksmith Balian is locked in a personal struggle with his faith following the death of his wife who committed suicide after the death of their child. Balian's life is further rocked following a visit from the legendary Knight of the Crusades, Godfrey of Ibelin. As Godfrey confesses to being Balian's father, he tries to persuade Balian to join his allegiance to Christian King Baldwin IV and help in their Crusade to preserve King Baldwin's vision of peace in Jerusalem. But Balian is far from impressed with Ibelin's revelations and declines the offer. But when the priest who buried his wife says that she is in hell for committing suicide and can only be redeemed by him joining the Crusade, he finds himself with no other opinion but to head for Jerusalem.

Although a fragile truce is presently maintained between the noble King and the legendary Muslim leader Saladin, the back room manipulations of a few power-hungry extremists threaten to destroy the delicate agreement, and there's nothing they'd like more than another war to rid the land of the Muslim's once and for all. As the leadership of the Crusading Knights and protection of the kingdom falls to the unprepared Balian, and with the leprosy-stricken King growing weaker by the day, the dissidents step up their dirty tricks waiting for their moment when the king finally succumbs.

Feeling the weight of the title that he has neither earned nor proved, Balian's emotions are further confused as he falls for the beautiful Sibylla, sister of King Baldwin and wife of Guy de Luisignan, one of the driving forces behind the drive for war against the Muslim army. As the massive events unfold around him, thrusting Jerusalem into one of the bloodiest battles in the history of the Crusades, it is Balian's faith, intelligence and desire for peace that helps him lead a rag-tagged army into a near fruitless battle against Saladin and his Muslim horde.

The picture is bright and colourful with a high level of detail throughout. The opening scenes have the same strange blue tinge as previously seen in Scott's Gladiator, whilst the rest of the settings in the deserts of the Middle East are bright and detailed. However, given the length of the film and the DTS and Dolby Digital soundtracks, there has been a fair amount of compression in order to get the film onto a single disc. As a result, the picture can be slightly grainy and noisy at times whilst slight outlining and hints of pixelisation occasionally raise their ugly head. Never the less, this slightly softer picture results in the extensive CGI effects looking absolutely superb, and it's only when you start to investigate the various featurettes on the supplemental disc that you realise just how extensive they are. The print is also clean and free from signs of dust scratches and other forms of print damage.

Given the length of the film its quite surprising to discover that the usual collection of multiple two channel soundtracks have been dropped in favour of an English 448 Kbps Dolby Digital 5.1 and 768 Kbps DTS soundtrack. The dialogue is crisp and sharp in the centre channel whilst there's some excellent stereo steerage in the front channels. However, it goes without saying that the best of the soundtrack is reserved for the all important surround and LFE channels. Although you have to wait for long periods of time before the action starts, once it does you quickly find yourself in the thick of the battle with a myriad of surround effects and masses of irritated rumblings from the subwoofer. As usual, the DTS and it's superior channel separation should be the soundtrack of choice, although the Dolby Digital version is still no pushover.

Kingdom of Heaven is available as a one disc DVD with special features including a Pilgrim's Commentary and a brief inside look into Tristan and Isolde, whilst a two disc DVD is also available with an additional six featurettes. The second disc includes an interactive step-by-step production grid that allows you to follow the film's creative development from a choice of sixteen documentaries which run for a total of around ninety minutes. It is the superior two disc edition which is reviewed here.

The menu system across both discs is animated and scored with the music from the film in a manner not too dissimilar to Gladiator. In fact, upon inserting the disc it took me a few moments to realise that I hadn't indeed inserted the wrong disc into the player. I can only assume that the same people who were responsible for the menu graphics for Gladiator were also called in for Kingdom of Heaven too.

Extras wise, the majority are contained on the supplemental disc and people opting for the single disc edition of the film will only find a graphical styled Pilgrim's Guide textual description of the events depicted in the film. It's hardly the most exciting pieces of information, but at least they made the effort. The extras on the first disc are rounded off with an extremely short Inside Look at Twentieth Century Fox's up and coming film Tristan and Isolde, but given the amount of information it provides you'll hardly be any wiser, and if anything, even more confused than before as to what the new film is about.

The main feature on the second disc is the rather novel, but ultimately rather pointless, Interactive Production Grid. Basically, it is an eighty three minute featurette split into Directing, Crew and Cast sections along with additional Pre, Prod or Post sections of the filmmaking process. Fortunately, you can skip all of this and opt to watch the extremely interesting and informative featurette in one go with interviews with the principle cast members, production crew and an equally enthusiastic Ridley Scott who seems to be still running at full steam from the production of Gladiator. It includes everything from the set design, the stunt work, the visual effects, editing and finally the musical score. Even though it's a rather long feature there's no flannel, apart from the usual collection of all round backslapping, and the level of detail is just right. This main featurette alone is worth the additional price of the second disc.

Next up is the Documentaries section which contains the two featurettes History vs. Hollywood and A&E MovieReal. The former is a forty three minute made for television featurette that looks at how Hollywood's version of the crusades actually compared with the real historical events. There's a number of interviews with historians whilst the cast and director Ridley Scott are on hand to provide some promotional fluff. If you can get past the cheesy American presenter, the actual historical detail is reasonably interesting, but it's all rather spoiled by the simple fact that the programme was essentially created to promote the film. The second forty five minute featurette is yet another made for television featurette, but this time features a few snippets of behind the scenes action, clips from the film, interviews with the principle cast members and director Ridley Scott. Some of the information is repeated from the first featurette, but on the whole, with a more detailed analysis from historians, it's the more interesting of the two.

Next up are eight minutes worth of Internet Features which were created in order to promote the film via the internet. There are four clips in total, running for around two minutes each, and consist of Ridley Scott : Creating Worlds, Orlando Bloom : The Adventure of a Lifetime, Production Design : Bringing the City to Life and Costume Design : Creating Characters Through Wardrobe. Unfortunately, the information contained within these features has already been covered in the Interactive Production Grid section and as such can be classed as simply being a bit of filler material. Still, for those people not equipped with broadband Internet access, at least you can now see just what all the fuss was about. Rounding things off is the Promotional Material section which consists of a single two and half minute long Theatrical Trailer. All in all, this second disc of extras really does add some much needed value to the film package.

Is it me, or does Kingdom of Heaven bare a stark resemblance to Gladiator? Even the main menu looks like it has been lifted from the Gladiator DVD release. With Ridley Scott being in the director's chair it's quiet easy to see just why he'd try to reproduce the same on screen formula from his multi Oscar winning film. Even the battle scenes and flow of the film bare a remarkable similarity to Gladiator whilst in the final battle for Jerusalem I'm sure that Orlando Bloom must have thought he was back in Middle Earth and fighting Sauron in The Lord of the Rings.

The trouble with Kingdom of Heaven is that the script is far too heavy for most (yes, and that includes me) and it fails to keep the attention span for too long. There's also an element of it all being done before with The Lord of the Rings taking the shine off the Hollywood epic. I think it's case of one epic too many in an epic overload running on the back of Gladiator. Sure, the battle scenes are worthy of a look in, and they do sound great in DTS, but all the politics proceeding the final battle, and not forgetting the politically correct bashing of the Christians make it hard work getting to those final scenes (could you have seriously seen a big Hollywood film making the Muslims out as being the vicious bad guys - even with historical events to back them up?).

There's talk of a director's cut in the near future which, whilst it may add yet more to the already bum numbing running time, may add some much needed meat and less flannel to the film. It may just be worth your while waiting for that release before purchasing, although curious types may find that a rental may just be in order to keep you interested.