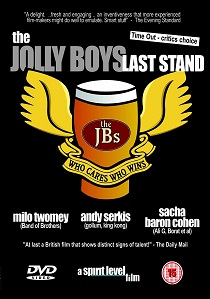 By day, Anthony Dale is a young executive with a bright and exciting future in the insurance industry. However, by night he is Spider, the "El Presidente" of the Jolly Boys Association. It's an exclusive club with only a handful of members where beer is the drink of choice and work is strictly off the conversation list. But with his job comes responsibilities, and he's finally succumbing to the evils of maturity. So becoming bored of all the jokes and their stupid antics, he decides its finally time to propose to his long term girlfriend Annie. With the deed done, and his proposal accepted, Anthony turns to his oldest friend, confirmed bachelor and second in command, Desmond "Des" Dixon, to be his best man.

The newly, but reluctantly, appointed best man sees this as the start of the end of their legendary drinking club. Faced with the thought of spending the rest of his life playing boring golf and spending his weekends doing DIY, Des decides that his present will be a home video tribute to the happy couple, whilst all along hoping that its on-screen action of madness, mayhem, debauchery and assault with a large dead fish in a car park, will help de-rail the marriage and save their club.

Meanwhile, each of the club members provides some input into this historical documentary. However, some members are more willing than others and Vincent "Vinnie" Di Luga decides to help in the bedroom department by filming himself with his girlfriend. It doesn't take too long for her to notice the camera and his moment of filmed passion with his squeaky PVC underpants is quickly extinguished. So with some parents of the bride to upset, a groom to annoy and a disaster of a stag weekend to organise, Des is going to have his work cut out if he is to pull the happy couple apart. Or is he?

To say that The Jolly Boys is a low budget British film production is a bit of an understatement and the quality of the DV footage soon gives the economy game away. With washed out colours, over saturation, high contrast, low contrast, grain, outlining and even good clarity and definition at times, it all stinks of different cameras and various grades of film stock. Never the less, you can't even begin to complain as the whole film is clearly documented as a camcorder home video memento. It's not going to win any awards for its direction or quality of the print, but it still manages to be fun and endearing too.

As with the quality of the transfer, the sound department is nothing special either. Never the less, the 192 Kbps Dolby Digital 2.0 stereo soundtrack more than meets its needs. Although the audio can be a little messy and confusing at times, the dialogue is reasonably clear in the centre channel whilst the front stereo channels do offer the occasional sense of direction. Still, don't expect anything to happen in either the surround or LFE channels so it's quite feasible to dispense with that expensive surround system for the duration of this film.

The main menu is scored whilst the display is made up of a static cut scene from the film. Extras wise, considering its budget limitations, it's quite a good haul. But before the menu appears there's a trailer for another of Spirit Level Films titles called "C'était un Rendezvous". Filmed in 1976, it's a pretty famous short film by seminal French director Claude Lelouch and is regarded as the ultimate in chase scenes. Famous or not, I have to say I've never heard of it before, but when there's a quote from Jeremy Clarkson saying that it "Makes Bullitt look like a cartoon", you know it's going to be a little unique to say the least.

The main extras is that Audio Commentary from director Chris Payne, Andy Serkis, Milo Twomey and Rebecca Craig. It's a friendly affair with plenty of banter from the contributors as they all talk seriously about the film. However, the audio level on this track is a little low so you have to keep cranking up the volume in order to hear what's being said. Unfortunately to, there's no subtitles available on either the main film or commentary track (although I suspect that the DVD budget didn't manage to squeeze that in).

Next up is the 21 minutes worth of Original Casting Sessions held at Ealing Studios as director Chris Payne puts the cast through a number of auditions. I guess this is the standard sort of thing that actors do on a regular basis before they are given a part, so it's great to see them putting on their best efforts in order to impress the director. Still, I suspect that it can be a little demeaning too and almost like singing for your supper if you like. But from a viewers point of view, not only is it entertaining but you also get to see an extension to their personality before they stand in front of a camera with a script and a different persona.

The Jolly Boys Last Stand is one of the few little known films that are a pleasure to review. Not only do you start off knowing very little about the film, with few expectations, but you nearly always end up being surprised by a title you've never even heard of until a preview disc drops on your doormat. Never mind the public at large, but I'm sure half of the film review magazines and on-lines sites would be hard pressed to know much about this film either. But with the main actors containing names such as Ali-G creator Sacha Baron Cohen and Andy Serkis of Lord of the Rings fame, the cynic in me would have to say that a certain band wagon is being jumped on, especially now Serkis has made a name for himself as a certain Empire State building climbing large ape.

However, I'm prepared to admit that I'm wrong as this film of a group of beer drinking pranksters heading out on a stag weekend could be realistically repeated week in, week out across the land. I mean, with pranks going wrong, injuries to the groom, disgruntled mates loosing their pal to the evils of a woman and the unimpressed parents of the bride, never mind this being a comedy drama, it's almost a BBC documentary programme, except much funnier.

If you ever needed a bit of a gambler title, and you enjoy the wonders of our ever so subtle British humour, then you really should give The Jolly Boys Last Stand a spin. Just don't expect to find it down your local DVD rental store. Recommended.

Special Features
Related Articles
Rise Of The Planet Of The Apes, Star Wars: The Last Jedi, War for the Planet of the Apes, Dawn of the Planet of the Apes, The Adventures Of Tintin: Secret Of The Unicorn, Rise Of The Planet Of The Apes, Animals United 3D, Sex & Drugs & Rock & Roll, The Cottage, Sugarhouse, Flushed Away, King Kong, Long Shot
Alice: Through the Looking Glass, Grimsby, The Ali G Show, Les Misérables, Madagascar 3: Europe's Most Wanted, The Dictator, Hugo, Madagascar: Escape 2 Africa, Borat: Cultural Learnings Of America For Make Benefit Glorious Nation Of Kazakhstan, Talladega Nights: The Ballad of Ricky Bobby, Ali G Indahouse
Mission Impossible 2
Master and Commander: The Far Side of the World (Special Edition)
90 Minutes
Comments
BD Releases News Pick