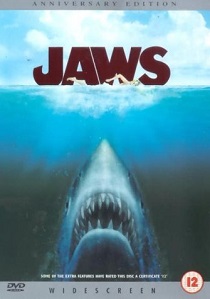 It is approaching the 4th July celebrations and, as a beach resort, Amity Islands busiest period of the year. The last thing the community need is anything to upset the celebrations. Unfortunately for Amity Island there's a huge man-eating shark feeding on the swimmers and the authorities don't want to loose any business by closing the beaches.

As more bathers are attacked and killed chief of police Martin Brody finally decides to act and assembles a crew to go and hunt down the shark. The crew is made up of enthusiastic marine biologist Matt Hooper and drunken shark hunter Quint. Together they head out to sea to catch the killer shark, unless it gets them first.

The picture is simply stunning. For a twenty year old film I was expecting a scratchy and dull picture but I was truly stunned by the quality. The picture is bright with an above average bit-rate with no artifacting or graininess.

The original soundtrack was recorded in mono but it has been re-mixed to produce a superb 5.1 soundtrack. Although it is lacking in LFE's, there are still plenty of gory effects in the rear channels and the front sound stage is equally impressive.

The extras are quite interesting, and they even managed to cause a stir at the BBFC to raise the original classification from PG to 12. The out-takes are a little short and pointless but the 'making of' documentary is interesting and informative. It is just a pity that there is no directors commentary, but lets face it, would you really expect Spielberg to do one?

Ok, the shark looks fake and rubbery but Jaws single-handily invented the summer blockbuster and was the first ever film to gross more than $100 million at the box office. It also launched a certain young Mr. Spielberg onto bigger and better things. The now famous award winning tune is enough to make your hairs stand-up on the back of your neck and I speak from experience. During a summer holiday I was enjoying a pleasant swim in a calm sea when that theme tune suddenly popped into my mind. Needless to say, I tuned around and headed straight for the shore.

This disc is one of the true classics and should be added to everyone's collection. Just avoid the inferior follow up films that just attempt to cash in on the Jaws name.