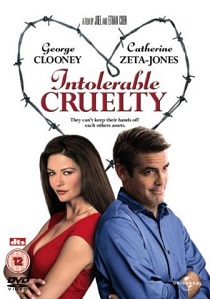 Divorce lawyer extraordinaire, Miles Massey, has reached a crossroads in his life. Despite two new cars, a house in the country, a string of impressive legal victories and being creator of the only impenetrable pre-nuptial agreement in existence (the world famous Massey Pre-Nup), something is missing from his life. But he is about to get more than he could ever have expected when the beautiful Marilyn Rexroth walks in to his office demanding a divorce from her train loving multi-millionaire property tycoon, and wandering, husband Rex Rexroth.

However, Marilyn Rexroth is no ordinary wife. She belongs to the ever increasing band of clever gold digging wives who marry rich wandering men with the sole intention of divorcing them and leaving with the country estate, the home in the Bahamas and 50% of the assets. With Marilyn in possession of a video proving her husbands unfaithful ways she is anticipating a bumper divorce settlement and her long awaited financial security and independence.

But Miles likes a challenge and Marilyn and her divorce lawyer hadn't banked on Miles's courtroom prowess and a killer witness called Heinz, the Baron Krauss von Espy who reveals her gold digging ways. As a result of his testimony Miles rescues Rex Rexroth from certain financial ruin and leaves Marilyn with nothing. However, despite his success, Miles does not account for the old adage, Hell has no fury like a woman scorned. Marilyn sets about exacting revenge on Miles, and his large bank, account by wedding Texan oil tycoon Howard Doyle and launching a battle of wits with the infatuated Miles. Will true love or the scorned lady win the day?

The picture is wonderfully bright and colourful with masses of detail along with an extremely high bit-rate throughout. Watching this film on a wide-screen television or, even better, on a plasma display will have you gob smacked by the shear quality of what DVD is truly capable of. The colour tones are near perfect along with superb black levels which are just as happy with either interior or exterior scenes. The only problem with the picture is that it tries just too hard and the shear clarity and sharpness of the picture occasionally highlights problems with grain and outlining. Mind you, this shouldn't cause any distraction and these slight problems can only be found if you go looking for them.

Naturally, for such a recent theatrical release the print is pristine and exhibits no signs of problems with dust scratches or other picture imperfections. You would normally expect newer productions to always have good quality prints available for its DVD release. However, there tends to be a huge variation in print quality from film to film, and for a digital age it's quite a disgrace. Fortunately, Universal Studios have outdone themselves here and after sitting down to watch this film without too many high expectations I was more than impressed with the outcome. As a result I would certainly consider this disc as future demonstration material.

Universal Pictures have been leading the way when it comes to supplying region two DVDs with dual Dolby Digital and DTS soundtracks. Unfortunately, they don't always pick the best films to showcase the two formats and Absolute Cruelty is one of those film where a DTS soundtrack is a little over the top for the genre of film. Never the less, it is still nice to have the choice of either format. The disc contains a 768Kbps DTS soundtrack along with a lower bit-rate 384Kbps Dolby Digital soundtrack. Both formats offer good stereo steerage in the front channels and some clear and precise dialogue in the centre channel. The surround channels are a little under used, but with a film of this genre you can't really expect any ground shaking effects. Although there is little to separate the competing formats, the superior separation of the DTS soundtrack ensures that it is the soundtrack of choice.

After you get past a rather grim faced Robbie Williams talking about third world child slavery the menu system is scored and pleasantly animated with some cut scenes from the movie. However, once you start to explore the menus you'll quickly discover that the extras are a little on the thin side. Perhaps the wife of one of Universal Studio's executives had a divorce settlement of 50% of the extras? There's not even a theatrical trailer in sight.

Anyhow, what's on offer is nothing really worth writing home about but at least there are some and they always go towards adding additional value to the disc. Fashion guru's (that'll be most women then) will be happy with the nicely presented 5 minute featurette on the costume design. The featurette has interviews with the Coen brothers and the costume designer along with the occasional quip from George and Catherine. I'm rarely convinced of the importance of costume design featurettes, and with the clothes in Absolute Cruelty not being that particularly special, I was a little unsure of the featurettes real value. Filler material perhaps?

Outtakes are always worth a look in at least once and if you can survive the first Everyone Eats Berries outtake montage without throwing something at the television then you'll take the separate George Clooney and Catherine Zeta-Jones outtakes with ease. And quite how a 3 minute black and white clip of trains can be classed as an outtake is beyond me. But I guess if, like Rex Rexroth, you like your trains then you'll be more than happy here. The main 10 minute promotional featurette is probably the best of a bad bunch with more interviews with the Coen brothers along with the principle cast members. It's the usual candy floss promotional interviews where everyone praises just about everyone else, but there's a bit of behind the scenes footage to keep the film fans happy.

Perhaps the limited amount of extras is down to the amount of space used up on the disc by the excellent picture transfer and the dual Dolby Digital and DTS soundtracks. If there was the chance of more extras then it may have been better to drop the rather unnecessary DTS soundtrack. However, you could look at the flip side of this argument by suggesting that the DTS soundtrack was added due to the lack of available extras.

I've never really rated George Clooney as much of an actor, suspecting that it was only his looks that appealed to an older audience. However, I will have to reconsider my opinions as Clooney's dentally obsessed Miles Massey is just sheer class. And if you put him together with his lawyer side kick Wrigley, played just as brilliantly by Paul Adelstein, it quickly turns what otherwise would be a average romantic comedy into a hoot. Catherine Zeta Jones may be jointly billed with George Clooney, but make no mistake, this film belongs to Clooney. But let's not forget the criminally underused Geoffrey Rush, the increasingly funny Cedric the Entertainer (let's just hope he doesn't change careers and becomes a painter and decorator) and Billy Bob Thornton.

It may not be one of the Coen brothers best films, with Fargo, The Big Lebowski and O'Brother Art Thou still way out in front, but it's certainly entertaining and it's sure to appeal to those massive hoards of Clooney fans. And let's not forget that the men are catered for in the delicious form of Catherine Zeta Jones. So pull up a chair, or even sit next to the missus, and enjoy a romantic comedy with a twist. It's just a shame about those extras.

Special Features
Related Articles
The Shape Of Water, Turbo, The Shape of Water, Lullaby, Olive Kitteridge, White House Down, Jack Reacher, Liberal Arts, Killing Them Softly, The Cabin In The Woods, The Rum Diary, Friends With Benefits, Let Me In, Step Brothers, Me, Myself and Irene, One Night at McCool's, The Rum Diary, Nightmare Alley
Bad Santa 2, Whiskey Tango Foxtrot, Our Brand is Crisis, Into The Grizzly Maze, The Judge, Fargo: Season 1, The Baytown Outlaws, Puss In Boots, The Informers, School for Scoundrels, Armageddon
Pirates of the Caribbean: On Stranger Tides, Pirates of the Caribbean: Salazar's Revenge, Gods of Egypt, The Daughter, The Book Thief, Pirates of the Caribbean: On Stranger Tides, Pirates of the Caribbean: At World's End, Pirates of the Caribbean on Blu-Ray, The Banger Sisters, Finding Nemo, Mystery Men, Pirates of the Caribbean: The Curse of the Black Pearl, Mystery Men
Money Monster, The Monuments Men, The Descendants, Money Monster, Return of the Killer Tomatoes!, Hail, Caesar!, Tomorrowland: A World Beyond, Gravity: Two-Disc Special Edition, The Monuments Men, Gravity, The Descendants, The Ides Of March, Up In The Air, Fantastic Mr. Fox, The Men Who Stare At Goats, Michael Clayton, Batman and Robin, Dusk 'Til Dawn, O'Brother Where Art Though?, Ocean's Eleven, The Perfect Storm, Solaris, The Thin Red Line, Three Kings, Fantastic Mr. Fox, The Thin Red Line: The Criterion Collection
Broken City, Broken, Dad's Army, Red 2, Broken City, Playing For Keeps, Lay the Favourite, The Rebound, Chicago, High Fidelity, The Mask of Zorro, Prodigal Son: Season 2
Madagascar 3: Europe's Most Wanted, Madagascar: Escape 2 Africa, Street Kings, Charlotte's Web, A Series of Unfortunate Events, Serving Sara
Bedazzled
I Think I Love My Wife, The Lost Boys, Overboard, The Paper Chase
My Sassy Girl
Comments
RecommendedView