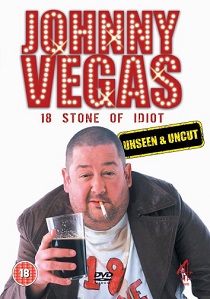 Johnny Vegas (aka Michael Pennington) won the Festival Critics' Award at the 1997 Edinburgh Festival, and was the first newcomer to be nominated for the Perrier Award (although I'm sure none of that evil none-alcoholic stuff has ever passed his lips). The son of strict Catholic parents, Pennington joined a seminary at the age of 11 but left after 18 months, deciding that a career in the priesthood was not really for him. Instead, when he was old enough to leave home, he headed for the big bright lights of London to follow his new chosen career. Flipping burgers? Tap dancing? No, it was pottery and he studied ceramic design for three years.

He once again toyed with the idea of joining the church, but instead chose a career in comedy. Showing himself as a rather talented comic, he has a Butlins redcoat style of entertainment crossed with self-pity and belly laughs (I mean, have you seen the size of his Guinness fuelled version?). So far, Johnny has a rather mixed CV and has presented The Big Breakfast during its twilight days, was a regular guest on Shooting Stars and made a memorable guest appearance on Room 101. He even got a smile out of the churlish Anne Robinson on the The Weakest Link. Johnny is also a talented comedy actor, as his award-winning performance as Charlie in Happiness and his brilliant turn as Fran's dodgy landlord in Black Books showed. And let's not forget his big screen outing in The Sex Lives of the Potato Men.

So it was only a matter of time before some mad, or extremely clever, person decided to give him his own show, and a chat show at that. Crossed somewhere between TFI Friday (which is no surprise since Chris Evans is executive producer), Jerry Springer and a drunken version of Candid Camera, it was obvious it wasn't going to be pitched in prime time television land but in the post Friday night pub slot. In his show, Vegas is joined by a host of celebrity guests including Ray Winstone, Kathy Burke, Elvis Costello, David Soul, Huey Morgan and Rhys Ifans, all interviewed in his own unique way. Naturally, with plenty of alcohol, free thinking guests and the madcap Johnny, it was fairly evident that there'd be plenty of material totally unsuitable for television broadcast. Now that's where the wonders of DVD come into play.

Let's face it. 18 Stone of Idiot is no mega budget production, even more so when you consider that it's a home grown Channel Four production. So it's quite surprising to discover that the programme is presented in anamorphic widescreen format. However, having not seen the original terrestrial broadcasts, I don't know whether the programme was actually broadcast in the same widescreen format. Either way, it's a good sign for the future of television to DVD productions. Transfer wise, the colours are rich and vibrant with a good level of detail whilst there are no signs of artifacting or outlining. Also, given it's television origins, the print is clean and free from any signs of print damage.

Because 18 Stone of Idiot originated on terrestrial television, and due to the current bandwidth restrictions that the technology imposes, all that is provided is a rather bog standard 256 Kbps Dolby Digital 2.0 stereo soundtrack. Never the less, the dialogue presented here is clear and precise whilst the musical score is just as clear and precise in the front stereo channels. Other than that, there's really nothing of any real note to report.

The menu is amusingly animated with strange paper cut out looking characters and scored with the music from the television show. Each additional menu is accompanied by a transition effect, whilst each of the sub-menus are also animated and scored in the same whacky style as the main menu. Extras wise, there's a surprisingly good selection on offer which will certainly please the fans whilst this collection also adds some good value to the disc.

The main extra is the Feature Commentary with Johnny Vegas, writer Tony Pitts (AKA "Mad Budgie") and series producer Gareth Collett. And what's the more surprising about this audio commentary is that Johnny Vegas is totally sober and, along with the contributions from the others, it's surprisingly interesting as they talk about the various guests and his TV democracy moments. The thirty-five minute Celebrity Lock In sees a bunch of D list celebrities, and Timmy Mallot, sitting round a table of a pub in a 'lock in' with Vegas seeing who can drink him under the table. Essentially, the feature follows them as some of the revelers get drunker and much rowdier before getting bored and clearing off home. It's not the funniest thing you'll see from Johnny Vegas and, if anything, goes to prove just how immature he can be.

Next up are eighteen minutes worth of Outtakes. Some DVD collections of outtakes are better than others, and it's the same case here too, although they're not all bad. Of the collection presented here, the angry baboon outtakes are the least amusing, whilst the TV democracy and guest outtakes are the best. The six minutes worth of Angry Baboon see's lots of additional, and most likely adlibbed, unused scenes of Johnny and his angry baboon friend who takes great joy in knocking him whilst he's sat on the toilet. With the success of the failed On Digital's advertisement with Johnny Vegas and a cloth monkey (an item which is probably worth more than the failed digital venture), it would seem that this is a bit of a send up of his previous advertising venture.

The final extra is the thirty two minute Celebrity Poker feature. Although the actual series contained a small part of this feature as part of his TV democracy feature, this featurette follows the usual amount of Vegas mayhem both behind the scenes and in front of the camera during his days worth of filming in Cardiff. However, It's not quite the full flowing feature you'll be expecting, as both the beginning and ending of the feature includes Vegas introducing and then concluding his day with ten or twenty short clips. Again, it's quite a funny featurette which adds more value to this disc.

Johnny Vegas' brand of humour may not be to everyone's taste, and I must admit that he's not my favourite comedian. I don't normally suffer fools, but just as with The Sex Lives of the Potato Men, for some bizarre reason this DVD really did make me laugh. Although the Channel Four show was unquestionably rubbish, the vast improvement in the show can only be put down to having the majority of dross cut out. With all those cuts, you've simply been left with all the best bits, and they're pretty funny too. However, other than the Celebrity Lock In, the icing on the cake are the hilarious extras with the highlight being the extended Celebrity Poker section.

The beauty of a comedian is the ability to do unscripted stand up, and judging by the outtakes and extended scenes, Johnny Vegas has this talent by the bucket load. And as I've previously stated, he's either a comedian that you'll love or hate with a passion. Still, some of his incessant drunken ramblings are far from amusing, and he can be rather immature (as the Celebrity Lock In feature goes to prove) but then again, some of his cruder efforts along with his scripted television appearances are simply hilarious. He may be a bit of an fat oaf, but his unique brand of comedy has certainly started to win me over.

18 Stone of Idiot should really only be bought by his true fans, or fans of comedy of the more obscure and crude nature. But even then, the rather extortionate asking price of £19.99 is more than sufficient to put many possible buyers off. Never the less, there should be no worries in considering it as a Friday or Saturday night rental. Just remember to steer well clear if you're easily offended.

Special Features
Related Articles
Home From Home: Series 1, The Harry Hill Movie, Ideal: Series 7, Ideal: Series 5, Benidorm: Series 2, Sex Lives of the Potato Men, Travel Man: 48 Hours In... Series 2, Being Frank: The Chris Sievey Story, Eaten By Lions
Madame Bovary, Snowden, Under Milk Wood, Serena, The Amazing Spider-Man, Anonymous, Mr. Nobody, Mr. Nice, Enduring Love, Once Upon a Time in The Midlands, Vanity Fair, Official Secrets, Misbehaviour
Once Upon a Time in The Midlands
Pentathlon, In the Cold of the Night
Comments
RecommendedView