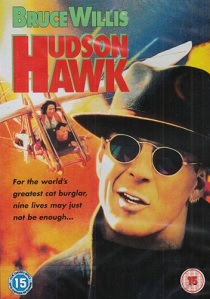 ReviewComedyAdventureBruce Willis
Review Article Go back to homepage
Eddie is the world's most famous cat burglar, and after spending the last ten years in jail he is determined to go straight. However, the CIA and the mob have conspired to blackmail Eddie into stealing three priceless da Vinci masterpieces from museums around the world. Whilst stealing the items he becomes embroiled in a plot to ruin the world economies with something that man has tried to master for centuries. Alchemy.
Bruce Willis, Danny Aiello, Andie MacDowell, Sandra Bernhard, Richard E Grant, James Coburn
Action/Adventure, Comedy
2
1 Hour 36 Minutes
Buy DVD
Story

Finally released from jail, all that Eddie wants is a cappuccino. However, cup in hand, he doesn't get the chance to drink it as the mob have other plans. They black mail him into stealing a priceless da Vinci horse statue from an auction house. After stealing the statue he takes it to the mob, but there is a higher power at work. The statue is smashed by Alfred, a mysterious Englishman, and a strange object retrieved from the wreckage. Stranger still, the paper reports that a break in was attempted but the horse was not stolen.

It is a pity that the effort could not have been made to re-master the soundtrack as it is only in Pro-logic - there's no hope for anything special in early DVD adopter land here. Also, the image quality is only just above average and gets on by with a low bit rate. Although devoid of the normal DVD extras we've come accustomed to, there is a welcome addition of a directors commentary.

Willis stumped up a lot of his own cash on this film and it was to cost him. It was a complete and utter flop at the cinema. Flushed with success from his previous films, Willis obviously thought he'd be on to a winner with this comedy. Perhaps the public weren't ready for a Willis comedy, but they lost out big time. The film is completely and utterly stolen by the totally over the top performances of Sandra Bernhard and Richard E Grant as the mad Mayflower husband and wife team. It is worth the price of the disc just to see them strut their stuff.