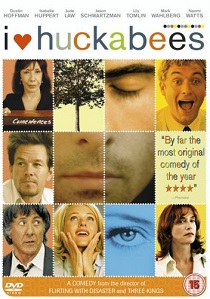 Albert Markovski is an environmental activist seeking the meaning behind a series of coincidental meetings with an enigmatic stranger. He enlists the help of existential detectives Bernard and Vivian, who agree to spy on his everyday activity in order to understand his psyche. The detectives soon discover that Albert is locked in a battle with Brad Stand, a smarmy executive at the Huckabees department store chain where nothing will get in his way in the march for progress, and profit. Shallow and vain, Brad defies Albert's protests about the proposed expansion of Huckabees into a nearby marsh, and even manages to twist the marsh supporters group into his favour.

So in an attempt to help Albert seek answers to his profound questions, Bernard and Vivian introduce Albert to Tommy Corn, a disillusioned anti-fossil fuel firefighter who is seeking answers to the same questions on life, which are also usually accompanied by a punch or two along with way. The lives of Albert, Tommy, Brad, Dawn, Bernard, and Vivian all become rather entangled and confused as their wild romp through life's biggest questions brings them to some startling truths.

The picture is bright and colourful throughout with a good level of detail. The varying interior and bright exterior scenes are handled with ease and the high bit-rate results in a crisp and clear picture with no signs of artifacting or outlining. Black levels are solid throughout and there are few problems with grain or pixelisation evident. The transfer is also clean and free from dust scratches or other forms of picture imperfections, although given that this is such a recent release I'd be surprised, and disappointed, if this were to be any other case.

Given that the film is primarily dialogue based there is very little need for anything too dynamic in the sound department. Never the less, the 448Kbps Dolby Digital 5.1 soundtrack does a good enough job with some clear and precise dialogue in the centre and front channels whilst the surround channels are occupied by the audio score and the occasional effect.

Once you get past the increasingly annoying anti-piracy reel and the ridiculous number of trailers for Taxi, Sideways, The Flight of the Phoenix, House of Flying Daggers and The Kingdom of Heaven, the menu system is finally displayed. The menu is scored and pleasantly animated with the occasional cut scene from the film, but in a design which reflects the confusing nature of the film, the menu layout is totally baffling and it will take a little bit of getting use to before you can navigate easily without resorting to the pointless clicking (on a PC at least) in the vain hope of something happening, although when something does the menu transition effects are rather impressive. Also, given its design I wouldn't be at all surprised if there's an Easter Egg or two hiding in there either.

Other than the four minute, and reasonably interesting, Inside Look at the CGI animated treat Robots, the majority of the extras are contained within the two menus of Special Features section of the disc. Still, you have to find the flipping menu first, but once you do there's a good selection on offer which may go on to help explain just what the film is all about, although let's not get ahead of ourselves here.

If you ever needed an explanation as to just what the heck is going on then what better way is there than an Audio Commentary? However, in the case of I Heart Huckabees we have two Commentary tracks. The first track is provided by director David O. Russell by himself whilst in the second track he is joined by Jason Schwartzman, Mark Wahlberg and, thanks to the telephone, Naomi Watts but given that the various making-of features highlight the apparent enthusiasm of both Jude Law and Dustin Hoffman, it's surprising to find them missing from the commentary. But with the film being a bit hard going at times, the commentary from director David O. Russell isn't the most exciting of tracks you'll ever hear, although if you do manage to keep listening it offers some interesting facts. However, it is the second track with the cast members which is much more fun and interesting to listen to.

In the thirty-four minute I Heart Huckabees Production featurette, the majority of the cast, with Jude Law probably giving the most on camera time, offer their opinions on the film and their roles within it. The camera continues to record the day-to-day on set production which are then scattered with the various cast, and occasional director, interviews. Although it can be quite difficult to hear what is being said on set there is a handy subtitling feature which, once enabled, makes life so much easier. There's plenty of on-set antics which go to prove that these people get paid lots of money to mess about, but as behind-the-scenes featurettes go, this is actually one of the better ones out there.

Next up are four Deleted and Extended Scenes which run for a total of fifteen minutes with an average picture quality. And as is the case with most of these extras, they simply appear to have been deleted for pacing purposes and none of the scenes are of particular interest. However, since there's no commentary or introduction from the director it is left to you to decide for yourself. In the three minutes worth of rather pointless Outtakes, it's hard to work out just what is wrong with the scene as the actors simply keep repeating their lines or actions over and over again. I normally associate outtakes with people falling about laughing or botching their lines, but none of that is to be found here.

In the equally absurd four minute featurette Miscellaneous Things People Did, the various cast members full faces and generally mess about on set. Highlights, if they can be classed as such, has Dusting Hoffman breaking wind (which is something which keeps cropping up on numerous other DVDs) as well as other cast members fluffing their lines and falling about laughing. Hang on a minute. Aren't they suppose to be in the Outtakes section? Also included is the music video for Jon Brion's rather catchy Knock Yourself Out tune from the film.

Finally, in the Infomercials, Commercials and PSAs sections we have a number of fake commercials and features to go with the film and it's theme. First up are two minutes worth of Open-Spaces Coalition shorts presented by Albert Markovski. Fake or not, these shorts actually do manage to highlight the many issues facing our natural environment and mans ever increasing demands upon it. Next up are two minutes worth of fake Commercials for the Huckabees store as seen in the film.

The section also includes a thirteen minute feature on Jon Brion's musical score. However, the only thing of real interest in this feature is to understand why the posters, or possibly awards, on the wall of the music studio are all electronically blocked out. Although I usually find Photo Galleries tedious affairs, the four minutes worth of production photos here are interesting enough and worthy of a look in, if only to enjoy the musical score that accompanies it. Finally, the second is rounded off with a twenty eight minute, and overly long, fake Informerical with Bernard and Vivian which is so mind numbing I got fed up after five minutes.

Although I like to approach each and every film I watch with an open mind, even after watching I Heart Huckabees the best part of twice, I still hadn't got a clue what on earth this film was about. I've seen some hard going films in my time, but this takes the biscuit. No, scratch that. It takes the biscuit, along with the rest of the packet and the shelf in the supermarket from where they originated. Still, there has to be some merit in the film somewhere as director David O. Russell has managed to attract an all-star cast including the likes of Jude Law, Jason Schwartzman, Dustin Hoffman and Naomi Watts. And if they decided to come on board they must have spotted something interesting in the script!

>Also, I'm always suspicious of any film which is critically acclaimed as this usually means it's complete pile of rubbish. Now that would be an extremely unfair conclusion to bring against I Heart Huckabees, and it's certainly one of the most original comedies to come along since the highly original, and equally bizarre, Being John Malkovich hit the screens some years back. Never the less, it's definitely a film where many an argument will ensue in the pub over what it was all about and what strange substances the writer was on at the time it was penned. You'll either love or hate this film.

Unfortunately, I'm in the later camp, and given it completely bombed in America (although that doesn't really say much for the tastes of their rather demanding cinema going audience) it seems that the fans will be in the minority. But hang on in there a minute. The simple fact that this wacky film will attract a small and dedicated audience means that in all certainty a cult following will ensue. As a result, you'd better play it safe and consider it for rental. After all, love it or hate it, at least you can say you've seen it!