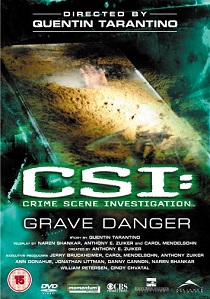 ReviewTV SeriesCrime
Review Article Go back to homepage
What happens when just doing your job leads you to mortal danger? Nick Stokes knows, and it's up to his team to find him before it's too late.
William L. Petersen, Marg Helgenberger, Gary Dourdan, George Eads, Jorja Fox, Eric Szmanda, Robert David Hall, Paul Guilfoyle
Television, Crime
2
1 Hour 22 Minutes
Thank you for supporting DVD365.net when you order using the link(s) below.
Buy DVD
Story

Working the night shift Warrick and Nick are up for the same assignments. But with a single toss of a coin, Nick loses and goes to investigate a report of entrails found in a an alley. It is here, in this seedy alley that Nick vanishes whilst a police officer calmly vomits next to his car. Kidnapped by a madman demanding a ransom, Nick is entombed in a clear Perspex coffin with nothing but a tape-recorder for his final message, 12 hours of air, glow sticks and his loaded service revolver for when it all becomes too much.

But in a terrible twist, there is a live web feed to his teammates back at base. Whilst they can see Nick they are not able communicate with him, whilst Nick is unaware that they can see him. But as the hours tick by, panic starts to take over and Nick starts to prepare for the worst. The CSI's have a frantic race against time to save Nick before his air runs out, and it's going to take all of their skills, methods and cunning to save their colleague from a grisly end. Can they rise to this challenge, or will this be the one case Gil Grissom and the team cannot crack?

The success of the series, and not forgetting Jerry Bruckheimer's influence within Hollywood, has ensured that director Quentin Tarantino has been presented with a budget which was most likely bigger than of the majority of the CSI episodes. As a result, the transfer is near perfect and almost motion picture like, with no signs of artifacting or print damage. The picture is bright and colourful with a high level of detail throughout with the opening credits looking particularly impressive and, given that the majority of the episodes take place either at night or in dark and dimly lit locations, the black levels are quite remarkable with grain kept to a minimum. The quality is also helped by the producers clear intention to release this series onto DVD and into the world of American HDTV. So where other television series suffer from relatively poor transfers, CSI can be classed as being one of, and if not, the best.

Being a television based series you can't really go expecting anything flash or fancy in the sound department. However, with that all important DVD market to cater for, and the new HDTV format on the horizon, you can always hope that something special will come along. And that it has, with a Dolby Digital 448 Kbps 5.1 soundtrack which is surprisingly involving. The dialogue is crisp and clear in the centre and front channels whilst the usual collection pop music tracks during the forensic analysis scenes are bold and powerful. However, what is more amazing is the activity in the big feature film sounding surround channel. As with most films, the dramatic musical score finds its way to the rear and LFE channels, but it's the effective use of the creepy and dramatic ambient effects which truly makes these the best sounding CSI episodes yet. I just hope that future releases sound as good as this.

The main menu is scored and animated with clips of the unfortunate Nick entombed in his box. There's some nice menu transition effects with some of CGI graphics from the programme whilst the sub-menus are static and silent affairs. Even though this is a double episode it would have been much more interesting to merge the two episodes together, remove the obvious advert breaks and make it into a single film. Unfortunately, it keeps the same episode format and each part needs to be selected separately. And what's even more annoying is the fact that the second episode even has a recap on the first. I know Joe public has a short attention span, but we've only just watched the previous episode! Worse still, there's not even a "play all" option.

Extras wise, it's all a bit of a disappointment, with two bonus episodes thrown in for apparent good measure. Still, they are reasonable ones and consist of both pilots for CSI and CSI : Miami. If you missed them first time around then you may find them of interest, although owners of the box-sets will probably not be too chuffed. Considering that the box set DVDs already come with a half decent collection of extras, including many episodes accompanied by audio commentaries, why couldn't Tarantino drag himself to the studio to provide one here? And what about some behind the scenes footage, or even the television teasers for this and other episodes? The opportunities were boundless, but that quick cash in was most probably the main idea behind this release.

The season finale was a triumph for Channel 5 when it was aired, pulling in an impressive 3.6 million viewers for a much under valued channel, while over in America 35 million people tuned in. These impressive viewing figure are surely the green light for the producers to keep the CSI franchise running for a few more seasons yet. Also, hot the heels of this ratings triumph, the Grave Danger episodes have been nominated for an Emmy in the forthcoming Annual Awards in the Outstanding Directing For A Drama Series category. This is on top of an overall series nomination for Outstanding Makeup (non Prosthetic), Outstanding Sound Editing and Outstanding Single-Camera Sound Mixing.

I'm very surprised that the money making machine that is a CBS executive hasn't turned their attention to making and releasing a double episode of CSI before. Still, putting this slight cynicism aside, they are a good idea and I do like the occasional double episode. When you consider that an episode without adverts runs for a mere forty minutes, the CSI team don't really have too much time to solve the case. As a result things end up bounding along at a heck of a pace with impossible breakthroughs that have you slapping your forehead in frustration.

In previous reviews of the spin off CSI Miami series I've stated that I much preferred the original Las Vegas based version. However, after having watching Grave Danger and then the pilot episodes of CSI and CSI Miami back to back, I have to say that I've changed my mind. There's a definite feeling that the mother series has run its course and if they've started to bring in different directors, and the outlandish storylines that someone like Tarantino brings, it's started to take away just what the series is about. The spin off series are a very good idea, but I just wonder whether the CSI phenomena is just starting to show signs of cracking.

Fans of the CSI franchise are sure to enjoy Grave Danger whilst they continue to wait for the remaining series to be aired on television and released on DVD. However, with both pilot episodes of CSI and CSI Miami already on DVD as part of their respective series box set releases, the extras supplied here do look a bit on the thin and desperate side. With the cross over episode Cross-Jurisdictions still only available on the region one edition of CSI Miami, it would have been a golden opportunity to add some exclusivity to this release. Still, extras or no extras, this disc is going to sell by the bucket load.