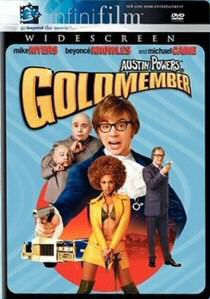 With yet another dastardly Dr. Evil plot rumbled by Austin Powers, Dr. Evil finds himself sentenced to 400 years in a maximum security prison. When Austin's father is kidnapped from his luxury yacht and the crew have their "meat and two veg" painted gold, Austin has no choice but to seek the assistance of his arch nemesis. But before Dr. Evil will help Austin he demands to be reunited with his beloved Mini-Me in a low security prison.

Reluctantly agreeing to his request, Austin discovers that it is not a case of discovering where his father is, but WHEN. Dr. Evil reveals that Nigel Powers has been kidnapped and taken back in time to 1975 by a gold loving Dutch man known as Goldmember. There's nothing for it, Austin has to dress up in his best glad rags and head back in time in his newly converted time travelling pimp mobile and meet up with old friend Foxxy Cleopatra.

Trouble is, there's some double crossing at hand and Dr. Evil and Mini-Me manage to escape from prison whilst Goldmember evades Austin and transports himself and Nigel Powers back to the future. Back in 2002 Dr. Evil and Goldmember have devised yet another devious plan to hold the world to ransom. Unless the world council pay them gazillions of dollars, Dr. Evil will flood the entire planet by crashing a solid gold meteorite into the north pole. Looks like another job for Austin Powers International Man of Mystery, oh, and and let's not forget his Dad.

The picture is bright and colourful with a high level of detail throughout. The bit rate also varies greatly but exhibits no signs of artifacting or outlining. This is certainly important when you consider that the colourful 1970's costumes could cause so many problems with the encoding process. The picture quality is also a great improvement over the past Austin Powers films and I suspect that the success of the previous films has provided the film makers with a much bigger budget resulting in the all round improvements.

Although the film is presented with a Dolby Digital and DTS-ES soundtrack there is really little to separate the two formats. Although the film is parody of the many James Bond films, there is little in the way of true action to give your sound system a comprehensive workout. Never the less, the dialogue is crisp and clear in the centre channel and on the few occasions that the surround channels are used it is effective enough. However, the superior separation offered by the DTS format always ensures that it is the overall winner, even in such a close call as this.

With this disc being an Infinifilm presentation you'd be expecting something special from the various menus. Unfortunately it isn't that extraordinary. Whilst the main menu is animated and scored if you leave it alone for only a few moments it all stops and leaves you wondering whether your player has crashed. As with the other Infinifilm discs presently available the various menus still remain confusing with no real coherent layout.

As with the previous Austin Powers films the disc is accompanied with a huge number of extras, and they're not filler material either. There's loads of featurettes and documentaries on the making of the film, music videos (including a Britney number), deleted scenes and outtakes. The deleted scenes are excellent, and more importantly, hilarious. Why these sort of things can't be incorporated into the main film is something that always puzzles me, even if they offered a number of seamless branching versions of the film.

The film also includes an audio commentary from directory Jay Roach and Mike Myers whilst Jay also provides an optional commentary for the deleted scenes. Both sets of commentaries are reasonable enough, although I was expecting Mike's commentary to be funnier than he was, in fact he was rather dull and sounded like he didn't really want to be there. I eventually got rather fed up with the commentary and opted for the far more interesting, and useful, Infinifilm feature cuts - just when are we going to see this feature on a region two disc?

This disc is a must purchase if only for the James Bond style introduction and its most unusual cast members. It's a real gob smacker, especially when you know nothing about the film (as I did when I first saw it at the cinema). Then there's the excellent Michael Caine as Austin's Father. The on screen chemistry between Mike and Michael is brilliant and judging by the outtakes and interviews they had a whale of a time.

If you liked the previous two Austin Powers films, or Mike Myers in general, then you should have no qualms about buying this one. Unless you are an easily offended Dutch person, it really is a laugh a minute. From sexual innuendo, slapstick and visual gags, it's got it all.