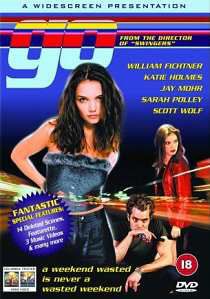 It starts with Adam andZack discovering that Simon, who deals drugs to earn a little extra cash, has left for Las Vegas, turns to Ronna to supply them with some Ecstasy. Ronna who has never dealt in drugs before is eager to attempt to supply the drugs as she is hard up for cash and is going to be evicted in the next few days.

Ronna's attempt to obtain the drugs forms one of the plot lines entitled Ronna. Ronna goes to Simon's dealer to try and get the drugs but discovers that she doesn't have enough money, so she leaves her friend Claire at the dealers house as collateral while she sells the drugs and gets the extra money. But things go wrong when she is forced to dispose of the pills.

The second story line Simon follows small time drug dealer Simon's trip to Las Vegas, where he very quickly looses all his money. The main plot of this second story line starts when Simon goes to a strip club and breaks the 'no hands' rule and end ups shooting a bouncer. The bouncer's pursuit of Simon and his friends provide some of the most memorable moments of the film.

The final story line Adam and Zack follows two soap actors attempts at co-operation with the police to try and drop drug charges against them. Where Scott Wolf (Adam) and Jay Mohr (Zack) are well cast in their roles, the best piece of casting in the whole film has to be Timothy Olyphant (Todd Gaines) who plays his part expertly and is the undisputed star of the 3rd story line.

Go should not be mistaken for another teen movie, as is the fashion in Hollywood these days, instead it is a very clever, funny, fast paced movie, which is good fun to watch. As mentioned before this film is influenced by Pulp Fiction, and while the direction is good it lacks the certain cleverness of Pulp Fiction, which lets an otherwise good film down. The sound and visual quality of this film were good, as are the special features, the deleted scenes are good viewing material (but only after you've seen the film).