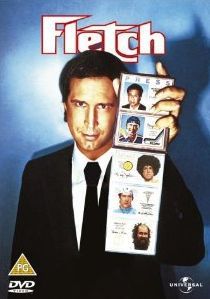 Irwin Fletch is divorced investigative reporter for a local newspaper who writes under the name of Jane Joe. When not avoiding paying alimony to his ex-wife's solicitor, he's working undercover at the beach as a down out. He's writing a story on the local drugs smuggling and dealing scene and is looking for clues.

One day Fletch is approached on the beach by Alan Stanwyk, a rich local businessman, who's looking for a beach bum who wants to earn a few easy bucks. Intrigued by the request, and the fact he's being offered $1000, Fletch agrees to listen to his offer. Stanwyk is dying of cancer and wants Fletch to shoot him in his home so his wife can collect the very large insurance payout. In return for doing this he'll pay him $50,000 and give him a plane ticket out of the country.

Naturally, Stanwyk isn't aware of Fletch's real profession so when Fletch returns to his office desk he decides to check out just who this mysterious man is. Using his "mastery" of disguise, he infiltrates a hospital and starts to delve in Stanwyk's medical history. It is there that he comes up with some startling information. There's nothing for it, Fletch has to don is best disguises and dodgy accents to get to expose the best story of his life.

For its age the picture is surprisingly bright and reasonability colourful throughout. Although the picture suffers from too much contrast at times, the picture is free from the dust specks and other imperfections that cause so many problems on older back catalogue material, plus there are no signs of any artifacting or outlining. It certainly exceeded my expectations and made a pleasant surprise from the usual DVD cash in events.

With this film harking back to 1985 you won't be expecting a lot of excitement in the sound department, especially with little or no work done on this back catalogue title. However, although the soundtrack is only stereo, it is more than ample for this dialogue intensive film. It is all accompanied by an ever so 80's instrumental score supplied by the one and only Harold Faltermeyer (the same chap behind the toe tapping Miami Vice and Beverley Hills Cop soundtracks)

The extras and static menu is hardly ground breaking stuff with only the theatrical trailer included. The film stock for the trailer must have been found in the bin at some long forgotten cinema as it is absolutely appalling with a huge number of dust scratches and other imperfections. I'm really surprised that they bothered to include it, still at least the main film didn't end up with this image quality. It would have also been rather nice to have a commentary track from Chevy Chase too. I'm not sure whether he's yet to provide one for any of his films, but with Fletch being one of his career defining moments, it would have been the perfect opportunity to make this a cracking DVD release.

This film highlights Chevy Chase at the high point of his career, i.e. when he was actually funny, and the numerous characters and disguises he creates are quite amusing. However, it is his trademark one liners that really raise most chuckles. Even with the lack of extras, if you're a fan of Chevy then you can't go wrong with this title.