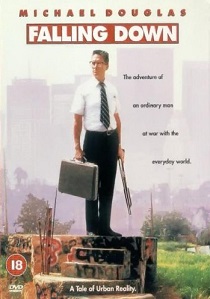 It is yet another hot and sunny day in downtown Los Angeles, and like most people these days, William Foster is stuck in a traffic jam. In the same traffic jam is Prendergast, a police officer on his last day before early retirement and, Unknown to him, he will be going head to head with William Foster before his final day is out.

With his car air-conditioning not working, and the many irritating distractions from car phones and annoying children all around him, William Foster finally lurches over the edge and he decides to abandon his car and head for home via one of the most violent areas of Los Angeles.

Wearing a white shirt and tie he is soon irritated by a store owner, threatened by a group of ghetto punks and a white supremacist who just happens to run an army surplus store. As he tackles each incident he becomes more and more violent towards each individual, finally reaching a point where murder is committed. As his violence is tracked across the Los Angeles district, Prendergast has an idea where he is heading and, in between phone calls from his domineering wife, he must reach "home" before it is too late.

The picture is bright and reasonability colourful, although it does tend to be washed out during the intense daylight scenes. It has an average bit-rate without any artifacting or outlining, but it does tend to be a little grainy at times. It is only just better than the video, but it is the functionality of DVD that wins this classic film over.

The sound is rather disappointing, but reasonability functional. Although there is a fair amount of explosions and gun fire, the pro-logic soundtrack holds up well enough with the amount of dialogue throughout the film. It is just a pity Warner couldn't manage to stretch to re-mastering the soundtrack.

Although William Foster completely flies off the handle, you can really sympathise with his earlier observations in the film. I'm sure everyone can agree with the scene in the Wammy burger fast food restaurant - I mean, the burger NEVER looks anything like the picture.

I've always said that film companies are releasing sub-standard material to make a quick and easy profit, and in the case of Falling Down it is easy to prove my point. For such a classic film, where are all of the extras? There's not even a trailer, let alone a director's commentary. Shame on you Warner.

#HappyBirthday #MichaelSheen. Help them celebrate their 54th year with #Quiz available on #DVD