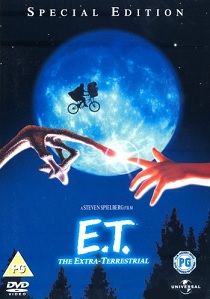 When a group of aliens are disturbed by humans during some research work in a forest they leave in a hurry only to abandon one of their fellow crew members. With the little alien lost, alone and three million miles from home he seeks sanctuary in the tool shed of a nearby family home. However, the government officials and scientists who disturbed the aliens know that one of the crew has been left behind and aren't going to rest until he's found.

So when young Elliott hears strange noises coming from the shed he, as any 10 year old boy would in the dead of the night, decides to go and investigate and nervously throws a ball into the shed. He certainly wasn't expecting it to be thrown back at him and, terrified, runs back into the house to seek help from his mother and elder brothers. Naturally, they don't believe that there's anything in the shed and suspect that the strange tracks in the mud are those of a coyote.

Later in the night Elliott plucks up the courage to return to the shed. This time he comes face to face with a mysterious creature and they both run away in terror. The following day Elliott follows the tracks made by the creature but fails to find anything. Hoping to tempt it back to the house he lays a trail of sweets for it it to follow. Later that night whilst sitting on the porch, Elliot comes face to face with a new friend and open himself up to a great danger as the government officials prowl the neighbourhood.

Is this film really celebrating its twentieth anniversary? Well, apart from the clothes and an extremely young Drew Barrymore, you'd be hard pressed to tell that it is really that old. The picture quality is truly awesome and must go down as one of the best pictures available on the DVD format.

The colours are pristine with a richness and detail that is totally amazing with a bit-rate that hardly ever drops below maximum. E.T himself has never looked any better, and with the assistance of some computer wizardry he comes even more to life. When they said the film has been digitally remastered, they weren't kidding as there's no signs of any artifacting or outlining.

Just as the picture astounds, so does the audio soundtrack. Both the Dolby Digital and DTS soundtracks are excellent, with the John Williams score being particularly impressive. The dialogue is crisp and clear in the centre channel without any signs of bleeding to the front channels. Even with the volume cranked up to a reasonably high volume you'll find that you're never having to dive for the remote whenever Mr. Williams reaches for his baton.

Yet again, the impressive dynamic range offered by the DTS soundtrack ensures that it is still the preferred audio, even if it is reduced to 768kb/s to accommodate both soundtracks. It's all perfectly balanced and sounds wonderful enough to be used as demonstration material. Never mind massive explosions and passing helicopters, the dramatic orchestral score provided here will really challenge your surround system and prove just how good it really is.

The menus are pleasantly animated with some clever parallax scrolling occurring whenever a menu option is selected. Most of the menus are animated whilst each one is scored. However, there is one continual annoyance with the sound set-up menu. Do we still need to be reminded that if we select the DTS soundtrack that we may not hear anything? With the majority of modern decoders now containing both Dolby and DTS, I'm sure we can stop with this nuisance.

With the disc being used to its full capacity by the superb picture and audio scores, the extras flood onto a second disc. Mind you, the first disc hasn't been neglected as there is a rather short introduction by Steven Spielberg and an additional score recorded live at the Shrine Auditorium, complete with the audience clapping a cheering. A novel idea indeed. However, just when is Mr. Spielberg going to give us a director's commentary.

The extras on the second disc are interesting enough. There's a 20th anniversary cast reunion and a rather interesting featurette on composer John Williams and a detailed look at the making of the film. There's also an interactive journey into space and the planets in our solar system. Its all rounded off with plenty of photographs and concept art work plus the good old theatrical trailers. Not a bad package at all. As well as a good selection of extras the packaging is rather nice too. Although I normally detest the overuse of paper packaging, this set is well presented with a nice foldout double sleeve and embossed cover. I just hope that it will still look as good as the film in another twenty years time.

Unfortunately, like the Star Wars trilogy, I remember all the fuss and commotion at the cinema first time around. Tickets to the cinema were like gold dust and there was a national shortage of tissues for the cinema going public to sob into. Everywhere you went this little squat alien appeared on everything from lamps to lunchboxes in one of first ever mega film merchandising tie-ins. It only seems fitting that today's generation can join in with a DVD purchase.

This anniversary edition contains two restored scenes and a number of digital makeovers which were just not possible with the puppet effects of the time. One of these scenes is from within the spaceship whilst the other is of E.T attempting to take a bath. There's also a bit of digital airbrushing at work to remove some guns from special agents and replace them with walkie-talkies. Mind you, other than the restored scenes, only the eagled eyed will probably notice the difference.

The only downside to this otherwise superb package would be the late announcement by Universal of an additional set containing the original film, the special edition version and a soundtrack CD. I'm sure those people who already own the special edition are not going to be too pleased about that. Was this a genuine mistake, an effort to appease a demanding public or a shameless stunt to make even more money? I'll leave that for you to decide.