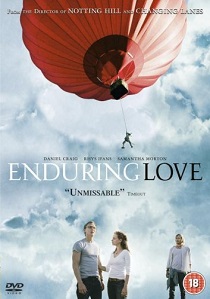 On a picturesque summer's day in a rolling green field in Oxford, Joe and Claire are enjoying a picnic and each other's company in the afternoon sun. Having been his girlfriend for a long time Joe has finally decided to pop the question. But just as he starts to open a bottle of expensive champagne Claire looks beyond his gaze and points to an unfolding drama above them. A red coloured hot air balloon has suddenly appeared over the tree tops and is drifting out of control near to the ground with a small boy clinging to the basket whilst an elderly man chases desperately behind.

Joe, and three other passers by who have watched the dramatic scene unfold, race towards the balloon in order to help them regain control. As they struggle to hang on to the guide ropes and try weigh it down the boy panics and, rather than pulling the ripcord to release the air from the balloon, he accidentally restarts the burner and launches the balloon back into the air. However, just as the group manage to get the balloon back under control a strong gust of wind rises over the hill and lifts the balloon and rescuers high into the air.

One by one the men are forced to let go before the balloon rises too high. All except one, John Logan, who holds on until it is too late and falls to a violent and grisly end. Traumatised by the horrific event, Joe dwells on his part in the stranger's death and starts to question whether he could have done more to save the man. The traumatic incident is also a catalyst for the actions of fellow rescuer Jed, who starts to believe that God has united them and fixates on Joe. Slowly Joe, Claire and Jed are pushed to the boundaries of sanity by the events of that day, and by an enduring and obsessive love which will tare them apart.

Being a British film you have to suspect that it was made on a shoe string budget. Never the less, it doesn't look like it with a truly amazing transfer that produces some fantastic rich and detailed colours and textures. Sure, with it being such a recent release you'd hope it would deliver the goods, but nothing like the high quality on show here. From the moment the film opens it looks simply stunning with clear blue skies, lush green meadows and the varying colours of the tree foliage. But then add the bright red colour of the balloon to the proceedings and you end up gob smacked at the sharpness and picture definition. Although they can be a little soft at times the interior scenes are just as good with some good black levels and no signs of either artifacting or outlining.

The 448 Kbps Dolby Digital 5.1 soundtrack is just as impressive as the picture. Again, it is the opening scene that draws you in with clear dialogue and some superb surround and spatial and directional effects in the front channels. However, once this dramatic opening is over it all settles down into a more dialogue intensive film with the surround channels being given the job of handling the excellent imposing audio score and the occasional ambient effect. Still, that faithful surround sound friend known as a rain shower brings everything back to life and reminds you just why you splashed out on your surround system in the first place. It's very effective and extremely welcome.

Before the menu system is presented there is a selection of trailers for forthcoming DVD releases. Whilst this is becoming a rather annoying occurrence I am placated by a fully blown Dolby Digital 5.1 trailer for the stunning House of Flying Daggers. Still, you can't jump directly to the menu and you have to skip through each of the trailers for Dear Frankie, Creep (which does actually look quite good), Sideways, Flight of the Phoenix and Kingdom of Heaven. Once the menu is displayed it is scored and animated with various cut scenes from the film. Selecting a sub-menu gives another cut scene from the film before presenting another static, but dramatically scored, menu. So far, so good...

The main extra on the disc is the audio commentary from director Roger Michell and producer Kevin Loader. Whilst it's certainly very interesting to listen to the audio level is extremely low and you have to crank up the volume to hear what they are saying. Even then, it can be difficult to hear their comments above the dramatic opening scenes. However, viewer beware, as if you then swap back to the main score, or even stick with the commentary track, you can end up with some serious noise blasting out of your speakers. The pair discuss the usual commentary subjects of cast, crew and the technical aspects of filming. Whilst some of these tracks can occasionally be rather boring, this one is rather informative and interesting. It's just a pity about the wilding varying sound levels.

Next up are the five Deleted Scenes. Running for a total of six minutes they can either be individually selected from the menu or viewed in one go. With no introduction or audio commentary from the director you are left to decide for yourself as to why they were removed from the film. Still, it all boils down to the usual case of timing and pace issues. Following on is the six minute short film Burst. Directed by Olivia Peniston-Bird, this rather grainy production all seems rather pointless, but given that some of the cast members from Enduring Love crop up I can only assumed that it was filmed during production. Never the less, it's fun and worth a watch at least once.

The extras also include a number of interesting, if a little on the short side, featurettes. In the seven minute featurette The Actor's Story, and with the help of numerous clips from the film, director Roger Michell, screenwriter Joe Penhall, producer Kevin Loader and its stars Daniel Craig, Rhys Ifans, Samantha Morton and Bill Nighy talk about their characters and the film in general. Following on, in the five minute The Film and the Novel featurette, and again with the help of clips from the film, director Roger Michell, producer Kevin Loader, screenwriter Joe Penhall and novelist Ian McEwan talk about adapting the book for the screen and that all important opening scene.

The final five minute Filming the Balloon featurette takes you behind-the-scenes of filming the dramatic opening scene of the film. Again director Roger Michell and producer Kevin Loader provide the information whilst star Bill Nighy, who wasn't even in the scenes, adds his ten pence worth of opinions. Things are rounded off nicely with the Theatrical Trailer and thirty seconds worth of television spots. All in all it's a great selection of extras which adds some excellent value to the disc.

With the British film industry only seeming to be capable of churning out gangster or cheesy romantic comedies starring Huge Grant, it makes a great change to see them come up with something more gritty in the drama department. The British can certainly deliver the goods on the small screen, with the likes of police dramas such as Cracker or A Touch of Frost appreciated beyond these shores, but what about the big screen? Whilst the drama element is certainly there, with some excellent acting from both Daniel Craig and the exceptionally creepy Rhys Ifans, it ultimately failed to impress. Whilst there's certainly going to be people who enjoy this film I found it far too slow at times and soon lost interest.

Trouble is, this is all the more annoying because the opening ten minutes of the film promised so much. With the brilliant handheld camera work instantly getting you in the thick of the action, and the manner in which Joe and Jed dealt with the fateful events, meant that it should have worked better than it did. Trouble is, it didn't, and Ian McEwan's book to screen adaptation ultimately failed to deliver the goods.

Still, a giant pat on the back to Pathé for their efforts as it must have been so tempting to release a simple vanilla disc with no extras. With a good selection of extras on offer they've managed to add some much needed value to the disc and as a result fans of the original book may just find it a tempting proposition for either a rental or purchase.