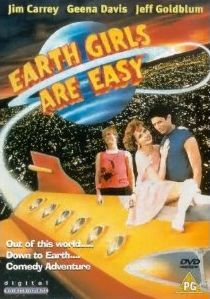 ReviewScience FictionComedyJim Carrey
Review Article Go back to homepage
When Valerie's fiancee brings home a new girl she wonders if life can get any worse, and it just has. Three aliens have just landed in her pool and they're out to prove that a good alien may be hard to find, but earth girls are easy.
Geena Davis, Jeff Goldblum, Jim Carrey, Damon Wayans, Charles Rocket, Julie Brown, Michael McKean, Larry Linville, Rick Overton
Science Fiction, Comedy
2
1 Hour 39 Minutes
Thank you for supporting DVD365.net when you order using the link(s) below.
Buy DVD
Story

Valerie lives in the valley and it is two weeks before her wedding to Ted, a doctor at a local hospital. Things aren't going too well in the bedroom and Valerie decides to spice up their love life with a new image. Rather than going to a nail polish convention she goes to the 'Curl up and die' beauty salon for a complete make over.

Unfortunately, Ted is playing away from home and brings home some 'homework'. Naturally, Valerie is not too happy and she throws out Ted. With the wedding off Valerie doesn't expect much else to go wrong, and certainly doesn't expect a group of hairy aliens to crash land in her swimming pool. Valerie takes the aliens to the salon (as you would) and gets them cleaned up and shaved. The aliens are now ready to go out and party in a way aliens only know how.

The picture and sound are simply awful. Although the picture is colourful with an above average bit-rate it is noisy and grainy. I'm sure they've just taken an ex-rental video tape and mastered it straight onto DVD. The sound is only two channel stereo with, at times, simply awful dubbing.

The extras are a bit of a joke. The so called photo gallery just looks like a few frame captures from the film, and bad ones at that. The usual trailer is also included and, although static, the menu has the film theme tune playing. At least they've made an effort, unlike some larger films companies you'd care to mention.

This film is only just worth the money, but if Geena Davies is your thing you may wish to be reminded that she sings (badly) and wears a skimpy bikini and sexy lingerie. If you were too young to remember the eighties, or want reminding just how awful they were, you couldn't do any better than this disc. The fashions and music were cringingly bad and Jim Carrey was a relative unknown.