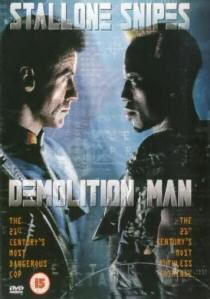 During the late nineties crime is rife in the Los Angeles area, with arch-criminal Simon Phoenix being one of the most dangerous and vicious in America. When he hijacks a bus and holds them hostage at his heavily defended base John Spartan, otherwise known as 'the demolition man', arrives to free the hostages and capture his quarry. Unfortunately, the rescue mission goes horribly wrong, and although he manages to capture Phoenix, the bus load of hostages are killed in a massive explosion.

Together with Phoenix, Spartan is sentenced to be cryogenically frozen and re-educated during his time as an ice cube. However, 36 years in the future, and during a parole hearing, the defrosted Phoenix manages to escape from the cryo-prison and starts to cause chaos in the city. With crime a thing of the past, the 21st century police force is completely unprepared for the violence and murder which is being unleashed upon them. In desperation they defrost John Spartan for his help.

However, unknown to John Spartan and the rest of the police force, Phoenix's escape was no slip in security as Dr. Raymond Cocteau, the savour of the city, requires his assistance in order to remove a plague of people who live beneath the city who are not part of his utopian plans. Unfortunately, for Cocteau, he hadn't appreciated how violent Simon Phoenix could be and things soon get out of hand as Phoenix and Spartan go head to head once more.

This must be one of the worst pictures I've ever seen on DVD. For a mainstream film by a large production company, this disc must be a major embarrassment to Warner, although I expect it has just been released on the back of the DVD phenomenon to make a few extras dollars in profit. The picture is grainy with a below average bit-rate and can only be considered as video quality. Although there is no artifacting, the night time scenes, especially at the beginning of the film, are completely washed out and are just a mess.

The sound is hardly any better. For a 5.1 soundtrack you'd be hard pressed to find anything of interest in the surround channels, let alone much LFE activity. However, the final battle between John Spartan and Simon Phoenix is reasonable enough. It's just a great pity that an action film like this couldn't have offered something much better in the sound department.

Demolition Man is a amusing tongue-in-cheek film with plenty of great one-liners. When the police force of the future are flummoxed by Phoenix's behaviour and come out with line such as "We are not trained to handle this sort of violence", you just have to laugh. However, my favourite part of the film is when John discovers that Arnold Schwarzenegger had been president.

This film is probably one of Stallone's better efforts, with the comedy and action being just in the right proportions, and Bullock puts in a fine performance as the naive young police officer, and she looks as lovely as ever. Oh, and Wesley Snipes should be a bad guy more often - he's brilliant in this film.

This disc is a big disappointment, only purchase if you're a fan of Stallone or Bullock. Better still, buy the video as it will be cheaper. Good film, shame about the disc.