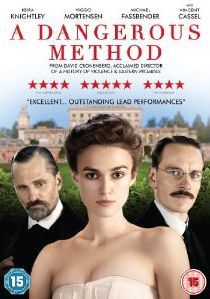 On the eve of World War I, Zurich and Vienna are the setting for a dark tale of sexual and intellectual discovery. Drawn from true-life events, the film takes a glimpse into the turbulent relationships between fledgling psychiatrist, and married family man, Carl Jung, his mentor Sigmund Freud and Sabina Spielrein, a beautiful and troubled young Russian woman who comes between them. Into the mix comes Otto Gross, a debauched patient who is determined to push the boundaries and tempt Carl Jung into something that no doctor should do - getting involved with his patients.

When a hysterical Sabina Spielrein arrives at psychiatric hospital in Zurich, she is hospitalised under the care of Dr. Carl Jung. The doctor has begun using Dr. Sigmund Freud's cure of talking with some of his patients and it soon becomes apparent that Spielrain's problems are deeply rooted in her childhood and violent father which has resulted in her being sexual aroused at the thought of being spanked. Talking about her past with Dr. Jung, Sabina quickly finds that it liberates her sexuality - along with intriguing Dr. Jung in the process who even manages to start taking to Spielrain and, much to his annoyance, Freud, about telepathy and psychic powers - including his own troubled dreams of a forthcoming carnage.

But thanks to Otto Gross, one of his disturbed (but insanely clever) patients, Otto sets out to test the boundaries of the doctor's professional resolve. This results in that golden rule of never getting involved with a patient, and one at a psychiatric hospital at that, being broken when, despite the fact that Jung is married, he and Sabina become lovers. With his loving wife spotting a change in his character, it's not long before the relationship starts to destroy his happy family that he's spent so long creating. Even long after Sabina is released from the hospital, and the ultimatum that his wife made, Jung continues to see Sabina and mentors her when she decides to become a doctor herself.

The 448kbps Dolby Digital 5.1 soundtrack is a rather good one - with Howard Shore's dramatic score taking centre stage. Being a particularly dialogue heavy film, and without the need for fancy special effects, the dialogue is crisp and clear in the front channels whilst the musical score is never overpowering.

Video wise, the transfer is a bit of a cracker - with some beautiful images on show, especially the various landscapes of Zurich and Vienna (although they are assisted with a bit of CGI wizardary - not that you'd spot that on this transfer!). The black levels are solid, colours are bold and bright, there are no signs of any edge enhancements or other artifacting whilst the quality of the flesh and colour tones makes A Dangerous Method standout as one of the better DVD transfers out there. If the DVD looks this good, heaven knows how the Blu-Ray disc performs - it's probably breathtaking.

The menu system on the DVD is not the most exiting you'll see on a DVD. With the musical score blasting out and a few small cut-scenes playing in a cut out window, you're simply presented with the usual "Scene Selection", "Extra Features" and "Setup" options which lead to static and silent menus (although there is a fairly nice transition effect between the menus).

Given that raised eyebrows tend to follow any David Cronenberg production the extras are a little on the light side. Running at a mere eight minutes, The Making of A Dangerous Method contains comments from Michael Fassbender, Viggo Mortensen, Keira Knightley, Vincent Cassel and David Cronenberg. Together they briefly talk about the characters and the basis for the story. There is also a look at very brief look at the costumes, the look of the film and the film's score. There's so little about the costumes and the score that it was virtually pointless adding it. Still, at least the cast members give a small insight into the film's origins.

The main extra on the disc is the Audio Commentary by Director David Cronenberg. Never a person to keep quiet, nor keep his opinions to himself, this yack track doesn't fail in the information department. From the off he talks about the special effects, the historical medical angles and the quality of his actors. He's very keen to dissect every portion of the film and, for the technical minded/interested, it's a very high quality commentary from a rather unique director.

The only other extras on the DVD are a couple of trailers for other titles - although the Blu-ray edition does have an additional thirty minute featurette where David Cronenberg responds to specific questions taken from an AFI audience of film students.

If you sit down to watch any film directed by David Cronenberg then you can be assured that you're going to be watching something a little out of the ordinary – and A Dangerous Method is no exception to this rule - even if it's nothing like his usual horror style of film (although, to be fair to him, with the sadomasochistic angle of the film, it was always bound to attract the usual level of "controversy" which goes with anything and everything that David Cronenberg does).

Vincent Cassel is excellent in his role as Otto Gross, as is Viggo Mortensen as Freud. However, Keira Knightly's acting was a little too over the top for my liking, especially in the earlier scenes where she is in the midst of hysteria. It's almost as if she was trying too much and was out to prove something to somebody. Perhaps her original drama teacher said something bad about her and she was out to prove them wrong. Never the less, David Cronenberg does tend to bring something extra out of his cast and crew - whether it be something weird or something wonderful.

If you're interested in the works of Sigmund Freud then A Dangerous Method is probably a worthy viewing and it's interesting to uncover the various psychiatric opinions of an early 20th century Europe on the verge of a bloody war. However, for everyone else (myself included), it's a little tedious, and unless you fancy seeing Keira Knightly being heartily spanked on her behind then you may want to avert your eyes and look elsewhere.