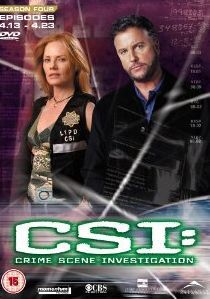 The highly popular and multi Emmy award winning series Crime Scene Investigation is back with the release of the second half of the fourth series. The series continues to go from strength to strength as the CSI gang take on some of their toughest challenges to date, both on and off the job. Leader Gil Grissom is attacked by a suspect, Catherine Willows finally confronts casino boss Sam Braun, Sara Sidle is crushed when Nick Stokes is promoted over her, Warrick Brown investigates an apparent murder/suicide whilst Greg Sanders finally gets to do some field work.

No other drama show in recent history has had such a major influence on popular culture and it's even started to effect real life jurors in the United States who have started to trust the forensic evidence over eyewitness testimony. Even the big stars are starting to show an interest in the show, and with Quentin Tarantino slated to direct the final episode of Series five, you can be sure of yet more blood and gore to come. So saddle up and sit down in front of the television for yet another cracking set of episodes as season winds up. The episode synopses are as follows:-

A bigger and better budget ultimately results in better post production results, and whilst previous seasons were rather lacking in the picture department, season four is much better. In fact, I'd have to say that the picture transfer here is possibly the best I've seen from a television series for a long time, and it even manages to eclipse some of the bigger budget movies that have found their way onto DVD. The colours are rich and vibrant with a good level of detail and, considering that a lot of the CSI's work is carried out in dark and gloomy locations, those all important black levels are impressive throughout with no problems with artifacting or outlining. An impressive result indeed.

Unlike the picture, the 448 Kbps Dolby Digital 5.1 soundtrack is reasonable, but hardly exciting, and it does at least manage to add some additional depth to the show. The dialogue is crisp and clear in the centre and front channels whilst the rear channels are used very occasionally for the ambient effects and the audio score. However, saying that, everything is heavily biased towards the front channels and the musical score does occasionally become too prominent and interferes with the dialogue. You can certainly tell that this is a television series and something more adventurous in the surround department would be very welcome.

Although simple, once you get past the increasingly annoying Anti-Piracy trailer, the menu system is superb with an introduction which could almost be straight out of the television show with the various members of the team dusting for prints and generally going about their crime solving duties. Still, they are not as clever as previous seasons menus and once you decide to select the episode menu it all becomes a static and silent affair. However, where the disc contains additional material there is a nice transition effect between the menus.

Although the fifteen-minute Evolution of an Episode : Pre-Production featurette is reasonable enough, it's essentially a rehash of the same material we've seen in previous CSI seasons. Still, fans of the series are sure to find something of interest and it's always interesting to go behind the scenes to see how those impressive sets are assembled and the scripts are created. The eighteen-minute Evolution of an Episode : Production featurette is far more interesting, with interviews with the cast and the production team plus the occasional nugget of information on the general problems of attempting to film in and around Las Vegas.

The final featurette is the ten-minute Evolution of an Episode : Post Production. This looks at, rather unsurprisingly, the post-production process of editing, scoring and mixing the episode plus any required picture corrections. Again, fans of the programme will probably find something of interest, although the more technically minded viewer will find it more interesting than most. Unfortunately, unlike the episodes, neither of the featurettes are equipped with subtitles.

Finally, the Bad to the Bone episode on the second disc is accompanied by an audio commentary from Eli Talbert, the co-producer and writer of the episode. Given that he's heavily involved in the episode he doesn't really have too much to say, and even when he does, it only ever tended to be on the make-up, the special effects and how a particular scene "scared him". Still, it is one of the better episodes in the season and it's certainly worthy of a listen.

With the superior budget comes superior special effects. There's gore galore, with realistic bullet and flesh wounds and, for the benefit of the good old queasy viewer, graphic reconstructions of the CSI teams theories on the murder and the nasty effects the incidents have on the body. It's so realistic and just goes to prove that a little research and attention to detail can go along way towards making an average programme a hit programme.

The only thing which continues to dog the various DVD releases of Crime Scene Investigation is its pricing. Where as the region one editions tend to be released as a single season boxset, Momentum has decided to release them in the UK in a rather pricey two part set. Not only does this annoy the fans by leaving a rather frustrating gap between releases, it also makes it rather expensive to complete the season. Is this simply an attempt to raid the UK consumer and recoup some of the production costs or shameless cash in? Possibly, but if you consider that the RRP of £39.99 is comparable with other larger region two box sets such as the Voyager or Enterprise, it doesn't sound that bad, plus you can save a fortune by venturing on-line and not having to buy a complete season in one go.

Crime Scene Investigation continues to be a massive hit across the world and, with it spawning the equally successful CSI : Miami and CSI : New York, there appears to be plenty of life left in the formula yet. With some top quality drama, action, production and some deft direction from Jerry Bruckheimer, it's very easy to see why the series is so popular the world over and, as such, a very important money spinner for CBS. So it's just a pity that CBS don't feel that the fans deserve something a little more substation in the extras department. Still, extras or no extras, it's still a worthy additional to your television series based DVD collection. Highly recommended.

3D-BD
After escaping an attack by what he claims was a 70-foot shark, Jonas Taylor must confront his fears to save those trapped in a sunken submersible as The Meg arrives on DVD, Blu-ray, 3D Blu-ray, 4K ... END_OF_DOCUMENT_TOKEN_TO_BE_REPLACED
Latest ReviewsView