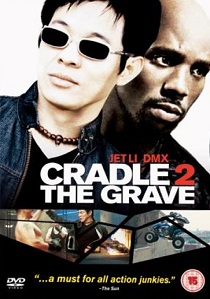 Fait and his gang are high-tech professional thieves and their latest heist involves holding up the Diamond Exchange. They have a strict no weapons policy and they enter buildings using their charms, beauty and damn right cunning. With the security guards attention diverted the team soon have the vault open and a nice little stash of diamonds in their possession. Whilst the majority of the diamonds are for themselves they have instructions to steal a set of black diamonds.

But there is more to these stones than meets the eye and a Taiwanese intelligence officer named Su has already been sent to the US to recover the gems. However, Su hadn't banked on the robbery and upon discovering that an under world criminal gang has its eyes on the stones he alerts the police to the robbery in progress. Suspecting that their client has betrayed them the gang avoid Su's requests to return the stones and go about finding a private buyer. But they hadn't banked on the stones owners wanting them back, and they'll stop at nothing to have them returned. When Fait's daughter is kidnapped and held until the stones are returned they have no alternative but to join forces with Su. And one thing is for certain. Their no guns rule has just gone out of the window.

The picture is bright and colourful with a high level of detail and depth throughout. There were a few occasions where outlining was a slight problem but it was so far and few between it really didn't effects things. However, both the daylight and night time scenes stood up well with some good colour saturation and there were no signs of artifacting or pixelisation. And with the action kicking off from the moment the film starts until the closing credits it is an impressive feat indeed. Being a recent theatrical release you would also expect that the print would be of the highest standard. Fortunately, the print is indeed free from dust scratches and other picture imperfections which can blight even the biggest budget films.

With a good quality picture the sound in this high kicking action film promised much. Unfortunately, it is not a good as it should be and considering that this is an action film the surround channels are criminally neglected whilst the other channels are rather muddled and confused. The only real channel which gets any action is the subwoofer which is mainly used by the bass heavy angry "chip on the shoulder" gansta-rap soundtrack. The majority of the film's dialogue is contained within the centre channel and, although it's hardly imaginative, the audio level is well balanced with the many action scenes.

The menu is animated with various cut scenes from the film along with a quick blast of DMX's angry soundtrack score "X Gon' Give It To Ya" and the extras are listed over two menus when one would have been suffice. Extras wise it's a bit of a mixed bag. For a start there's no audio commentary from either the director or Jet Li but the various featurettes manage to go someway to make up for its omission.

Although the various featurettes are rather short, a single featurette would have been better but it looks poorer on the extras list, they do reveal a lot of information about the production and the martial arts involved in the film. If you like your "Ultimate Fighting" then the feature on the fighting ring scene will be of interest along with its homage to the stereotypical kung-fu fight. The feature on the decender rig is also reasonably interesting whilst the two Easter eggs would have been much better being a standard feature rather than having to go hunting for them. They are quite easy to find, but if you're having trouble have a look below. There's another featurette on the final fight scene and whilst it's multi-angle it's hardly anything to get excited about. It's all rounded off with the standard filler material of theatrical trailer and cast list.

In keeping with the ridiculous Hong Kong plot lines, Crade 2 the Grave is no exception to the rule. However, the saving grace with the majority of these films are the action scenes. Although Jet Li doesn't kick his way through the entire film, when he does he does it in style. Highlight of the film must be his fight scene with ten to fifteen guys in an ultimate fighting ring whilst other cast members are simultaneously fighting with some of the bad guys in a different location. It's great and worth while watching the film for this single scene.

If you like your action films with little to tax the old grey matter then you really can't go wrong with Cradle 2 the Grave. It definitely has to be classed as one of the better Hong King to Hollywood crossovers of late. However, if you are expecting something along the lines of Jet Li's Kiss of the Dragon then you're going to be rather disappointed. Whist Li does get to kick some bad guys around it is no where near as much as his other films. Mind you, like Jackie Chan, he is getting on a bit and perhaps he's easing off the pedal a little bit.

Finally, haters of that hideous Warner invention the "snapper case" are going to be over the moon when they discover it is no more and Cradle 2 the Grave gets a proper and longer lasting case. Oh, rejoice, rejoice, rejoice.