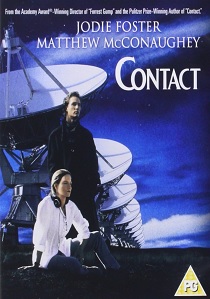 ReviewScience Fiction
Review Article Go back to homepage
After many years of searching the heavens, contact is finally made when a message from outside of our galaxy is received. Mankind must now adjust to the fact that we are no longer alone in the universe.
Jodie Foster, Matthew McConaugey, James Wood, John Hurt, Tom Skerritt
Science Fiction
2
2 Hours 24 Minutes
Thank you for supporting DVD365.net when you order using the link(s) below.
Buy DVD
Story

Contact must have one of the best film introductions ever. We start by rocketing away from planet earth with intermingled music from the 90's, and yes the Spice Girls are in there, gradually panning out through our galaxy. Little by little the music changes through the decades until there is nothing but static, the point where all our planets radio signals are yet to reach. Finally we appear in Ellie's eyes peering through a telescope. Pure brilliance.

Ellie is obsessed with the stars and together with her father she spends her evening scoring the skies until one tragic evening when her father collapses and dies. We move to the present day where she is working at an observatory in Puerto Rico on the SETI programme. Her search and desire to find a message in the sky is never ending, however this is soon cut short when the project is closed down.

Ellie attempts, and fails, to get further backing from other companies due to her true reasons for the research. That is until her final presentation. Billionaire businessman S.R. Haddon gives her the funding she requires to continue with the research, and one night it pays off as she picks up a unexplained signal from the stars.

Further investigation produces a image, and then sound, of Hitler's opening address at the Berlin Olympics, the first signal ever to beamed around the world. A further signal is then discovered which turns out to be instructions to build a single seat spacecraft. As usual, the military get involved but their cover up is thwarted when Ellie and the research team go public. The question now arises, do the people of earth build the craft, and who gets to go?

The sound is simply stunning, probably the best I've ever heard in a film. One moment stands out the most and is a definite Dolby demo moment. When the machine is being tested, the front and rear speakers are given a relentless workout as the gyroscope hurtles around from the rear to front sound stage. And boy, if you are fortunate to own a subwoofer and need a wall knocking down, the LFE's are simply amazing. The picture is just as good. The detail is pin sharp to the degree of being able to pick out where the special effects on the screen start, and they say the camera never lies.

This is the film which convinced me that I just had to get a Dolby Digital set up at home. The thundering bass in the THX cinema had my ribcage rattling and crying out for more. From that day on I was totally hooked and so will you.

The story is cleverly worked and must be put down to the brilliant writer Carl Sagan, who unfortunately died before the film was completed. It is a very profound film as your opinions change from one minute to another on the true origins of the message and the religious problems it causes. Indeed, it caused me to spend a great of time thinking about religion in general.