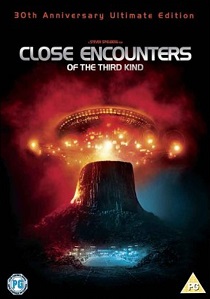 When a squadron of US Navy Avenger torpedo-bombers disappeared without a trace during a training mission in December 1945 nobody expected to see them ever again. However, Flight 19 has just appeared in the Sonora Desert in Mexico. Although the pilots are missing, the planes are still in perfect condition with fuel in their tanks. With the authorities baffled by their apparent reappearance, the local residents start reporting that they saw strange bright lights in the night sky. The mysteries continue when, in the middle of Mongolia's Gobi Desert, hundreds of miles from the sea, the long missing battleship Cotopaxi has inexplicably been discovered.

Meanwhile in Muncie, Indiana commercial airliners are being buzzed by strange lights in the sky and the lights in the districts keep going out. Roy Neary is a line worker for the local power company and he's called out to deal with yet another routine blackout. However, he gets hopelessly lost and his radio is full of people babbling about seeing strange lights in the sky. After his truck is enveloped by a massive bright light he, and a group of other people who have had similar encounters, become inexplicably drawn to Devil's Tower in Wyoming.

When government scientists decipher an audio code being broadcast from an alien source they have no intention of making this momentous occasion a public affair. And their discovery? The aliens are broadcasting map coordinates and it appears their destination for a close encounter of the third kind is to be Devil's Tower. But in order to keep the encounter a secret, the government fabricates a chemical disaster and quarantines the entire area - forcing thousands of people to be evacuated from the area. However, Roy's draw to Devil's Tower is relentless and he will stop at nothing to reach the site and obtain the answers that he, and the other members of the close encounters group, want from their mysterious, and alien, calling.

I'm not quite sure what I was expecting from a thirty year old transfer, but it certainly wasn't anything as good as this. The picture has been superbly cleaned up and there's hardly a picture imperfection in sight. The colours are rich and vibrant with an above average bit-rate throughout the film and there are no signs of any outlining or artifacting. Sure, some scenes are more challenging than others - especially the opening scenes in the desert, but on the whole it's classic viewing material with only a few noticeable problems with grain. With all of the action taking place at night, the sky and surrounding areas are as black as space itself, and when the various spacecraft travel overhead there is a crescendo of amazing colours - truly a remarkable feat for the special effects of the time.

Although both sound formats have been included on the various discs there is very little to set the two formats apart as both are as good as each other. From the beginning of the film in the wind swept desert to the awesome wall shaking finale, your surround system will be tested to the limit with the 768 Kbps DTS and 448Kbps Dolby Digital 5.1 soundtracks both working their hearts out. The dialogue is crisp and wonderfully clear in the centre channel whilst there's some excellent stereo steerage in the front channels. The surround channels are also used extensively throughout the film and, towards the end of the film and as the mother ship approaches, the subwoofer takes over the show with some room shuddering LFE's that could almost loosen the plaster from the walls and be detected by an earthquake monitoring station.

The menu menus across each of the three discs are animated with cut scenes from the film superimposed on the colourful communication board as used to communicate with our alien visitors. It's also accompanied by the wonderful John Williams score, although the submenus are static and silent affairs. The extras on each are nothing new to this set and, to be honest, are pretty typical of a Steven Spielberg production - pretty sparse in number. Never the less, whilst they are far and few between, they are big in detail and length and the perfect additional to the films.

Part of the special features for the original Collector's Edition, The mammoth Making of Documentary runs for a massive 102 minutes. Although it appears to be the same version which appeared on the Laserdisc edition, it's full of detail which looks at the film from cast, pre-production, production, the special effects (the details of some which are pretty hilarious in a pre-CGI world), music to the special edition release. Fortunately, there are a number of chapters available which split the documentary in useful sections which can be easily revisited. Things become a little more deflated with the five minute Watching the Skies featurette. This is your usual promotion fluff feature with some behind the scenes footage and film clips - most of which you'll already have seen in the main Making Of featurette.

Fortunately, there is some new material for this anniversary release in the form of the Steven Spielberg: 30 Years of Close Encounters. Running for twenty two minutes, Spielberg talks fondly about the film and its impact, although you get the feeling that you're learning nothing new from the already viewed featurettes. Never the less, rather than performing a simple cash in, at least some effort has gone into producing something for this release. Finally, rounding things off in the extras department, each disc includes a dramatic trailer for each edition of the film and, boy, did they known how to produce a trailer back then!

Now that the extra material on the three discs has been dealt with we can now move onto the highlight of this collectors edition with the gorgeously lavish booklet crammed with photographs and detailed information on the cast with the occasional comment from Spielberg. Fans of the film will certainly find this of great value, interest and collectability, although purists may want to opt for the Blu-Ray version which contains additional extras.

What I didn't quite appreciate was that each of the three editions available, all of which are present and correct here, are all slightly different. Interestingly, the final Director's Cut actually has more material removed - especially the final scene in the interior of the mothership which got the director very cross indeed. Still, I guess you should never against the director's wishes - especially the likes of Steven Spielberg. If you're confused by the differences in each edition then there's a handy foldout companion that shows a film time bar and each addition or removal from the Original Theatrical Version, Special Edition and Director's Cut. And very handy it is too.

This is all packaged and presented in a wonderful top opening box with a piece of ribbon to assist in the removal of its contents. Unfortunately, there is a down side with the presentation as the lid is held down with a small, but rather strong, magnet and I managed to open the wrong end of the box. I then had to reach for the glue if I was to prevent the contents from falling out every time I went near my DVD shelf. Still, there's only one person to blame for that - and that's me for being all to eager to get at its delightful contents.

This is remarkable piece of cinema which should be added to your collection - even more so when there's so many different variations of the film on offer in this anniversary set. When you consider that the majority of films of the era were more concerned with vicious and bloody aliens, Close Encounters of a Third Kind was a great change to show aliens in a better and more friendly light and it's something that Steven Spielberg continued to work with when he continued that amazing success with the more family orientated E.T. The Extraterrestrial. However, there is a down side to both of these films as every wacko under the sun started to see similar aliens and crafts as depicted in the films. Mind you, saying that, perhaps the producers already knew something we didn't.

Still, let's just hope that this cash cow has been well and truly milked and there's no more versions of the film lurking in any of Spielberg's kitchen cupboards - although there's now a version available on Blu-Ray. But, given how quickly time flies, it won't be long before the fiftieth anniversary edition is released with a free alien spaceship included in the packaging. Unfortunately, it's at times like these that you wish you were aboard the time defying alien spacecraft yourself!

An awesome film in an awesome boxset. Highly recommended.