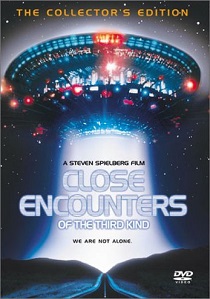 Close Encounters of the Third Kind (1977)

When a squadron of US Navy Avenger torpedo-bombers disappeared without a trace during a training mission in December 1945 nobody expected to see them ever again. However, Flight 19 has just appeared in the Sonora Desert in Mexico. Although the pilots are missing the planes are still in perfect condition and a local resident reported strange bright lights in the sky.

Meanwhile in Muncie, Indiana commercial airliners are being buzzed by strange lights in the sky and the lights in the district have all gone out. Roy Neary is a line worker for the local power company and he's called out to deal with the blackout. However, he gets hopelessly lost and his radio is full of people babbling about seeing strange lights in the sky. When his truck is enveloped by a massive bright light he, and a group of other people who have had similar encounters, become inexplicably drawn to Devil's Tower in Wyoming where physical contact, a close encounter of the third kind, is going to occur.

The government scientists have no intention of making this momentous occasion a public affair and fabricate a chemical disaster to quarantine the entire area. However, their draw to Devil's Tower is relentless and they will stop at nothing to reach the site to obtain the answer to their mysterious calling.

The picture is gob-smackingly brilliant and quite possibly the best ever picture to appear on DVD. I'm not quite sure what I was expecting from a 25 year old film, but it certainly wasn't anything as good as this. The picture has been superbly cleaned up and there's not a picture imperfection in sight. The colours are rich and vibrant with an above average bit-rate throughout the film with no signs of any outlining or artifacting. With all of the action taking place at night the sky and surrounding areas are as black as space itself and when the various spacecraft travel overhead there is a crescendo of amazing colours - truly a remarkable feat for the special effects of the time.

Although both sound formats have been included on the disc there is very little to set the two formats apart as both are as good as each other. From the beginning of the film in the wind swept desert to the awesome finale your surround system will be tested to the limit. The dialogue is crisp and wonderfully clear in the centre channel with some excellent stereo steerage. The surround channels are used extensively throughout the film and once the mother ship approaches the subwoofer takes over the show with some room shuddering LFE's.

With the length of the feature film and the accommodation of the two sound formats the extras spill onto a second disc. The main "making of documentary" runs for a massive 102 minutes and it appears to be the same version which appeared on the Laserdisc edition. Fortunately, there are a number of chapters available which split the documentary in useful sections which can be easily revisited.

There's also the original making of documentary and a number of deleted scenes, which to be honest, would have been far more interesting to see restored to the film as a number of scenes were crucial to the initial sightings by Roy Neary. Both discs have wonderfully animated and scored menus and together with some wonderful packing really adds up to a bargain package.

This is remarkable piece of cinema which should be added to your collection. When you consider that the majority of films of the era were more concerned with vicious and bloody aliens it made a great change to show aliens in a better and friendly light. However, there is a down side to this film as every wacko under the sun started to see similar aliens and crafts as depicted in the film. Mind you, perhaps the producers already knew something we didn't.