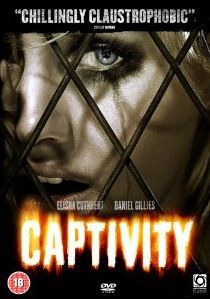 ReviewHorrorThriller
Review Article Go back to homepage
A top cover girl is kidnapped and held in an underground dungeon and subjected to a series of terrifying and life-threatening tortures that could only be conceived by a twisted, sadistic mind.
Elisha Cuthbert, Daniel Gillies, Pruitt Taylor Vince, Michael Harney, Laz Alonso
Suspense/Thriller, Horror
2
1 Hour 25 Minutes
Thank you for supporting DVD365.net when you order using the link(s) below.
Buy DVD
Story

Top cover girl and fashion model, Jennifer Tree has it all - beauty, fame, money and power. Her face appears on covers of hundreds of magazines - in fact in the opening 10 minutes her face is splashed across just about every billboard and bus visible. At the top of her game, Jennifer is America's sweetheart. She is loved and adored and sought after. Everyone wants her, but not everyone is looking to date her or simply be friends. Someone out there has been watching and waiting. Someone wants her in the worst way and they're ready to make their move.

Out alone at a charity event in Soho, Jennifer has her drink spiked. Feeling queasy she staggers to the toilets where she notices a video camera filming her in the corridor. It's the last thing she notices before being grabbed from behind and smothered with a chloroform soaked handkerchief. Waking up she hears and sees a lovely beachside view - only to discover that it's a projection onto a wall of a small cell. She's been kidnapped - and there's not going to be a ransom.

Held captive in an underground dungeon, Jennifer is subjected to an array of terrifying and life-threatening tortures that could only be conceived by a twisted, sadistic mind. Strapped to chairs, force fed, drugged and teased with life-threatening games that would test the hardest of minds and bodies, the days soon turn into weeks. However, all is not lost, as Jennifer discovers that she's not alone in her cell - she has a neighbour, Gary, and he's pretty keen on breaking out too. Can the pair work together before their time runs out and their captor kills them and moves onto fresh prey?

From the opening credits you are offered a rather good looking transfer. Not only are the opening credits indicative of something special, but once the film finally opens you are presented with some rich images and solid colours. Although it does have a slightly washed out look, once you move to the confines of the underground dungeon the power of DVD comes into play with a massive range of dark colours. Black levels are wonderfully solid whilst there are no real issues with either outlining or pixelisation. Whilst the majority of the film takes place in the dark, there are occasions when the screen is filled with bright flashes of light and - let's not forget why we're here - plenty of blood and gore. Again, being such a recent theatrical release there are no issues with dust specks or other forms of print damage. All in all, it's a rather good picture transfer indeed.

A lot of films of late have been rather poor in the sound department - with some rather unimaginative effects and use of the surround channels - and a claustrophobic film such as Captivity cries out for something really special. Fortunately, the 448 Kbps Dolby Digital soundtrack doesn't disappoint and provides a soundtrack that will give your surround system a much needed workout. With creaks, groans, hisses, cracks, gargles, screams and a myriad of other strange noises attacking you from all directions you'll soon be suffering from neck ache as you forever turn from one speaker to the next. However, even amongst all of this audio mayhem, there's some good stereo steerage in the front channels, a wonderful score that doesn't overpower things and dialogue that is firmly locked in the centre channels. Cracking, and creepy, stuff.

Before you get to the impressive menu system you are presented with trailers for other Optimum releases - Unknown, Exiled and This is England. Rather annoyingly, these can't be skipped (but you can fast forward) and once watched the rather creepy menu, fully animated and (in a rare occurrence) scored in 5.1, is displayed. And it's a cracking and completely unexpected menu system too - with various cut-scenes from the film blended into the background along with sub-menus that are also scored and animated (another rare occurrence). Extras wise, there's a good collection on offer including Deleted Scenes and a number of Featurettes. However, one major omission is the lack of subtitles for the hard of hearing.

The first of those featurettes is the twelve minute Making Of. Featuring interviews with the principle cast members, director and producers, the various interviews include plenty behind-the-scenes footage and clips from the film. Whilst it contains the usual flannel about the genre, the film's origins and how wonderful everybody is from the cleaner to the director, it's a fairly informative affair that will appeal to fans of the film. Next up is the seven minute Interview with Elisha Cuthbert. Naturally, it's yet another featurette that contains all the usual PR fluff, but Elisha comes across quite well and divulges a fair bit of information about the production - and even surprising me by revealing that it was filmed in Russia. Split into various sections, each one asks a particular question which she duly answers. Sure, there's the usual all round back slapping, but the most interesting question posed is about her challenges - with one scene in particular requiring a sick bucket to be provided.

Whilst always a welcome edition, the nine Deleted Scenes - including two with a rather disappointed looking vulture - only manage to exacerbate the numerous plot holes that already make the film look ever so silly. Not only is a subplot involving a police psychiatrist and the tracking of Jennifer's whereabouts completely removed, but there are two rather bizarre (and contrasting) Alternate Endings that, had either been used in the film, they would have had you throwing your empty beer cans and wine bottles at the television in disgust. Things are rounded off with the US and UK Theatrical Trailers which, whilst slightly different to each other, use the same clips - albeit it in a different order.

Captivity managed to make a name for itself before it even appeared at the cinema - and I'm sure the distributors loved every minute of their free publicity (even Elisha Cuthbert mentions it in her interview). The controversy resulted from the initial advertising campaign for the film in the US which featured a multi-panelled poster. The first was labelled Abduction and featured actress Elisha Cuthbert looking petrified, the second was labelled "Confinement" and showed her behind a chain-link fence, the third was labelled "Torture" and had Cuthbert on her back with her face hidden within a white cast and red tubes going up her nose (you need to see the film to know what that's all about) whilst the fourth was labelled "Termination" and featured a body hanging over a table. So, after much laughing at the free exposure, the film company withdraw the poster and Joe Public dashed out to buy the cinema tickets to see what all of the fuss was about. Unfortunately, that rush didn't last too long.

As for the film itself, it's a big disappointment and the presence of Elisha Cuthbert can't even help matters, after all, a pretty face doesn't necessarily mean a winning formula for a film - well, I guess that does depend on what kind of film you're thinking of. However, not only has the storyline been covered in so many different ways to make it predictable (it didn't take long for me to suss out the plot), the story is so muddled and disjointed I was left wondering just how many scenes were deleted from the film. Whilst I should have been horrified at what was presented to me on the screen, I was more likely to be laughing or thinking "eh? that doesn't make any sense". This wasn't a claustrophobic horror film - it was a comedy!

Optimum have the knack of releasing some of the more obscure titles out there - including some cracking Japanese titles - so fans of just about every genre going are going to be catered for by one release or another. Although Captivity won't appeal to mainstream film fans, I'm sure those devoted fans of the horror genre - and gore fans in particular - will still find the time to love it. Not only do they have Elisha Cuthbert to drool over (who still manages to change her clothes every five minutes) but the chasm of plot holes will be of little consequence and they'll soon be chanting "we want gore!". Fortunately, they'll soon be placated with a "health" shake that should be avoided at all costs - even more so if you're a person who's always a little unsure of the true contents of their freshly prepared smoothie.