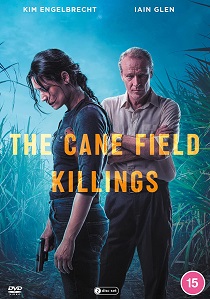 ReviewTV SeriesDramaCrimeIain GlenKim Engelbrecht
Review Article Go back to homepage
In 1994 South Africa, a multi-racial couple's daughter is kidnapped. She escapes, and as an adult she becomes a detective. Continuing to deal with her past trauma, Reyka uses her skills to raise her child and solve mysteries that have challenged others.
Kim Engelbrecht, Iain Glen, Anna-Mart van der Merwe, Rashaan Stackling, Hamilton Dlamini, Leeanda Reddy, Thando Thabethe, Sifiso Simamane
Drama, Crime, Television
2
8 Hours
Thank you for supporting DVD365.net when you order using the link(s) below.
Buy DVD
Story

It's 1994. A young Reyka Gama is transfixed by the atmosphere of South Africa's first ever free elections. But after wandering off from her mother to pet a dog, she wakes up in the home of local banana farmer Angus Speelman and held captive. Fortunately, some four years later, Reyka manages to escape and manages to inform the police of her kidnappers location, leading to Angus being sent to prison for a lengthy period of time.

Back in the present, Reyka is now a flawed but brilliant criminal profiler. Still traumatised by her childhood experience and suffering from a form of PTSD, it also helps her enter the minds of some of Africa's most notorious criminals. So after a much publicity over her recent success in capturing a serial killer, Reyka is brought in to help investigate a dismembered woman's body found in the sugar cane fields of KwaZulu-Natal. With no real leads, or motives, the mystery deepens further when another body is discovered among the sugar cane.

But after testifying against Speelman's release at a parole hearing, Reyka can't resist visiting him in jail. Manipulative and charming, his hold on Reyka 20 years later is still there, and he offers to help her remember her time in captivity, along with offering some insight into the latest serial killer. But it will come at a price - his freedom and his desire to be a family once more. But who will help who? Will Reyka get into Speelman's mind and help her remember her past experiences, or will Speelman get back into Reyka's tortured mind?

Forced to face her demons both past and present Reyka, embarks on a high-stakes fight for the truth amidst deadly secrets, the criminal underworld and shadowy politics of a post-apartheid land.

Before watching an episode of The Cane Field Killings you may want to take an anti-sickness pill as, my goodness, there are enough shaky close-ups using hand-held cameras that even people with the most iron cast of stomachs might feel a little queasy. Also, with a deliberately muted palette along with a sombre grey-blue tint throughout, you may also be reaching for the remote and its colour controls to make the picture a little brighter too. Goodness, it's all dark, morose and depressing. And I love it! So much for the vibrant sights of South Africa!

Thankfully, and even with the below average bitrate, images are clear enough throughout and there are no signs of artifacting or pixelisation. Whether this would be true of any heavily compressed digital broadcast or streaming service is a different matter, so it's great to have this material available to us on DVD.

Whilst the main language used in the series is English, there are also regular portions where the native isiZulu language is used too - and sometimes in the same sentence. I'm not sure whether this is deliberate, or whether the isiZulu language doesn't have the equivalent English words, but when the language quickly switches between the two it can be hard to keep up understand what's going on. Fortunately, subtitles do appear on screen, but it's not helped by the conversation sounding muffled. Matters aren't further helped by that dark picture too.

Spread out over two discs, the eight one hour episodes are presented via a static and silent menu system. The episodes can be selected individually, or if you're in the mood for a binge watch, they can also be played in one go. The extras are presented on the second disc, with two galleries and an interesting, albeit rather short, behind-the-scenes look at the series.

I don't really class galleries as an extra - it's usually just a bit of "fluff" material, but whilst you can skip the gallery of the cast and scenes from the series, the second one of the crew is of more interest, particularily in the fact that everyone is wearing face coverings of one sort or another. No, they're all not in a gang, but it is clear that The Cane Field Killings was filmed during the pandemic.

The main extra is the five-minute interview with the cast and crew. Whilst it's basically your normal PR showcase, it's still a rather good collection of interviews with the cast, director, and various producers. It provides some additional insight on the African film and television industry, how the series came about and the various characters, and all without revealing the plot outcome (useful for if you decide to take a peak before watching the series).

All in all, a good collection of DVD extras for what could have been a vanilla release - so a good slap on the back for Acorn there.

The first thing to say about The Cane Field Killings is that it's dark. Very dark. And it's not just the picture either. It's very much like The Silence of the Lambs, but without the Chianti, which has been crossed with a smattering of the excellent True Detective. I'm a fan of both the film and the television series, so as soon as I saw Reyka meeting with Speelman in prison, I instantly thought about Stockholm Syndrome, and the chemistry which Hannibal Lecter used to entangled Clarice Starling.

We don't get access to a lot of crime drama from, or set in, South Africa. Is there more of it which will travel that we don't know about? There's probably too many run of the mill murder/detective programmes from America and the United Kingdom, so anything fresh in this area is very welcome indeed - especially given the quality of the production seen here.

Given that The Cane Field Killings is likely to be inspired by the real-life crimes of the infamous Thozamile Taki - also known as The Sugarcane Killer - who was convicted of the grusome murders of 13 young women, burying their bodies in the sugarcane fields around Umzinto, it sounds like South Africa might well have a few more gruesome stories to tell too. This is no In The Line of Duty or Agatha Raisin. With this cracking series shining the spotlight on the growing confidence of the African film and television industry, I'll look forward to seeing more from them in the future.

Even though Acorn also have released their own streaming service, it's still wonderful to see them continuing with physical releases such as the recent release of Rules of the Game, and now The Cane Field Killings. Fortunately, if you don't subscribe to their service, or missed the original broadcast on British television, you can now enjoy this enthralling crime drama series on DVD.