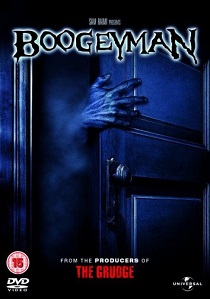 Tim continues to be terrified by the childhood myth of the Boogeyman and, although he is now an adult, Tim is still haunted by a visit from the Boogeyman and the subsequent disappearance of his father. For sixteen years ago Tim was being terrified by an approaching storm which rattled his windows whilst flashes of lightning made odd shapes on his bedroom walls. So when his father enters his room to check up on him, he tries to placate Tim by checking out the room and cupboards. But after checking his closet the Boogeyman grabs him from behind and he's sucked into the closet, never to be seen or heard from again.

Terrified that the Boogeyman will return for him, Tim has used his apartment to create a safe haven. He has removed the doors from the cupboards in the kitchen, there are no wardrobes or even a bed. He's even gone as far as fitting his fridge with glass doors knowing full well that with an apartment with no dark corners there is nowhere for evil to hide. With his apartment now safe and sound he has managed to rebuild his life, get a great job as an assistant editor at a magazine and even has a beautiful girlfriend Jessica (although quite what she thinks of his rather odd apartment is a different matter).

But all of this is of little comfort to him as, after the death of his mother, he is forced to return to his childhood home. At the funeral he spots his childhood friend Kate who later pops over to the house to say "hi" and, for all her trouble, is quickly drawn into the dark world of Tim's fears. As Tim wanders round the house and re-acquaints himself with the surroundings he is constantly reliving the past and his memories soon take over as his fear returns. As the horror starts all over again he is befriended by a young girl Franny, who tells him he must go back to where it began in order to defeat

Although the picture has been deliberately degraded to give it a more washed out and bleached look, the picture still manages to impress with a rich and detailed transfer. With an above average bit-rate and some excellent black levels during both day and nighttime scenes, the excellent transfer ensures that there are no apparent problems with either artifacting or outlining. Also, being such a recent release, the transfer is free from signs of dust scratches and other forms of print defects. All in all, it's an unexpectedly good result that even some of the bigger Hollywood blockbusters would have trouble reproducing.

With an audience to scare the soundtrack plays a very important part in reproducing those noises that go bump in the night. So, from the off, the 448 Kbps Dolby Digital 5.1 soundtrack does its very best and offers plenty of impressive surround and floor thumping LFE effects to make you jump in all the right places. It's just the sort of soundtrack that a suspenseful horror film cries out for.

However, this "shock factor" is relied on far too much as, although the dialogue is firmly fixed in the centre channel, it's actually rather hard to hear and you end up having to increase the volume. Lulled into a false sense of security you then settle down only to be blasted out of your seat whenever something remotely chilling happens. And it's not because it's scary - it's simply too flipping loud! If it was the producers intention to make you jump by loud noises alone, then Sam Raimi and Rob Tapert have truly earned their keep here.

The menu is cleverly animated and scored with various clips of video and dialogue from the film whilst there's a nice transition effect between the main menus. The extras comprise of cast interviews on the evolution of the horror film, a look at the visual effects progression, six deleted scenes plus an alternate ending. It all sounds quite detailed and promising, however the extras ultimately fail to add some much needed value to this release.

The interviews are split into two, with the rather sub-standard and uninteresting Evolution Of The Horror Film featurette running for around fifteen minutes whilst the usual collection of back slapping occurs in the twenty minute Crew, Characters and Cast featurette. I found both a bit samey and thought that they could have easily been coupled together. Still, there's nothing like two featurettes to pad-out those ever so dull extras.

The biggest disappointments were with the Deleted Scenes, The Alternate Ending and the Special Effects Progression featurette. For a start, there is no audio commentary to explain just why the cuts occurred or the reasoning behind the alternate ending, you simply have to come up with your own ideas. That said, the deleted scenes spoke for themselves, and the alternate ending was not too clever either. The Special Effects Progression runs for five minutes and is the biggest let down of the set. Again, without a commentary, it simply replays a number of the scenes from the film and shows the SE 'progression'. It all becomes rather monotonous and I bored of it long before it ended. There are also three storyboards which I found a little pointless.

With the opening scenes offering so much promise (after all, how many times did you hide under the sheets during a storm when you were a youngster?) Boogeyman ends up being another confusing offering from a tired formula with nothing new to offer. There are so many other films of this genre out there that Boogeyman has rapidly exceeded its sell by date. Whereas the Japanese film industry has managed to produce some genuinely scary titles of late, such as Ringu, it's always left to Hollywood to spoil things by producing substandard horror films or appalling remakes.

It really is 'Horror by Numbers' and it was neither scary or creepy with very little in the way of excitement, suspense or tension. It's all so predictable and you can even see the parts that were suppose to make you jump a mile off, although saying that, there was one particular scene that did startle me, but even then it was not of the Boogeyman's doing. The ending also leaves a lot of unanswered questions and ripe for that inevitable, and rather unwelcome, sequel.

If Sam Raimi and Rob Tapert's venture of Ghost House Pictures is to flourish, I just hope that their future collaborations come up with something a little more original and entertaining than Boogeyman. Strictly a film for teenage horror fans, and even then it's hard one to call.