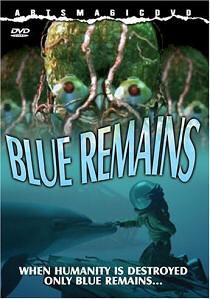 In a world laid waste by nuclear war, Amamiku and her family have returned to earth with seeds that hold the genetic code of the planet which can be used for its rebirth. But as the ship approaches earth another nuclear exchange occurs and the ship is forced to crash land in one of the less polluted oceans of the planet. There they must wait in stasis for the radiation levels to return to something nearer normal before releasing the seeds. However, Amamiku's parents have been contaminated by the radiation and decide that it would be pointless in them joining their daughter in stasis. So as they place their daughter into stasis they leave her instructions on how to restore the earth to its former glory.

Awaking some ninety years later, Amamiku still lives undiscovered and safe from the radiation above. But with only the ships super-computer and guard robot Pyron for company, she waits impatiently for the earth to be ready for the seeds to germinate. But when her existence is discovered, it sparks a frantic race between the remains of humanity struggling for survival and the disembodied brain Glyptofane, who seeing mankind as a plague, has programmed his robotic army to destroy every last living human. Will Amamiku be able to germinate the seeds of the earth before it's too late?

With the film being complete CGI animation throughout I was expecting something outstanding from the picture transfer. Unfortunately, somebody must have reformatted the computer hard disc as the source material used here is not what you'd expect for a film created entirely in the digital domain. The main problem is that the picture is far too soft which then results in grain becoming a fairly big problem. Although things are far from perfect, the picture remains free from other forms of imperfections and if you consider that until Finding Nemo came along underwater CGI was pretty much the holly grail of animation. Fortunately, the little known Blue Remains has a damn good crack at it.

Whilst the sea is suspiciously devoid of life, with only the occasional fish and a mechanical dolphin to contend with, the caustic lighting effects on the sea floor are quite impressive whilst the lack of life can be handily disguised by the holocaustic events above the surface. However, it was still quite easy to forget that the whole thing is set underwater and you are only reminded of this fact during the battle scenes with the slowly raising sand clouds and the very soft focus. Still, considering that the film was made some three years before Finding Nemo, and on a budget so small it probably wouldn't have paid for the Pixar end of project lunch, it really is quite an amazing feat.

The film is accompanied by both English and Japanese 448Kbps Dolby Digital 5.1 soundtracks. And in the usual manner of providing an English translation for a Japanese film, some of the dialogue is quite odd whilst the actors must have been straight off the streets with some really unconvincing acting. Even the English subtitles didn't always match the dialogue so I suspect that the best option is to go with the Japanese soundtrack and use the English subtitles. At least that way you can get some form of emotion from the original actors voices.

Sound wise, things aren't too bad at all, even if I have heard better soundtracks. Still, the dialogue is clear and precise in the centre channel whilst the front stereo channels also accommodate the dialogue and other effects. The surround channels are fairly active throughout, even if the effects aren't that particularly impressive and have very little imagination to them. It all seems a hurried and messy affair. Fortunately, things can sound good once the LFE channel starts to shake the room during the many battle scenes.

The menu is pleasantly animated and scored with some rather soothing music whilst the options for the static and silent sub-menus are clearly laid out and easy to navigate through. Extras wise things are a little disappointing with only the twenty-five minute Director Interview being of any particular interest. Other extras include textual bio/filmographies of the directors and designer plus trailers.

Naturally, for a native Japanese film it would be rather unusual to have the interview performed in English so unless you understand Japanese then the optional subtitles is a bit of a must. The interview with Hisaya Takabayashi appears to have been performed with a run of the mill video camera resulting in a fairly grainy, but watchable, picture whilst the noisy soundtrack is not too distracting. And like most Japanese people, Hisaya is very humble about his career and what is most interesting about the interview is that, due to various reasons, the story was pretty much made up as they went at long - and to be honest, it looks like it too. Still, the interview contains plenty of useful information for fans of the film and Anime in general.

Things are rounded off by trailers for other Artsmagic title A.LI.C.E and where would we be without a trailer for The Blue Remains? All in all the extras are a bit of a disappointment and they are not on par with Artsmagic's usual high standards. Still, I guess they can only add material to a disc if such information exists and you can't expect miracles at every new release.

Overall, including the rather poor set of extras, The Blue Remains is a bit of a disappointment. Animation wise, things are certainly impressive with some CGI effects to rival some of the mega budget Hollywood animation blockbusters, but as can be the case with most video games and Anime films, it all becomes rather messy and incoherent at times. Intentional or not, there's a definite Matrix and Final Fantasy feeling to the film, and with this strange fantasy mix that only Japan could get away it, it doesn't really pass over to the western markets too well. Never the less, fans of Anime are still likely to enjoy these underwater shenanigans whilst the general viewer is not really going to be impressed. But, after all, you're never going to appeal to all walks of life.

Never the less, Artsmagic still needs to be congratulated for their brave efforts in bringing titles such as these into the mass market. With little known titles such as Malice@Doll and Sabu already under their belt, Artsmagic continue to release niche titles which many other distributors would give a wide berth to. As a result, titles such as these are now known outside of their native Japan and the entertainment world is a better place for it.