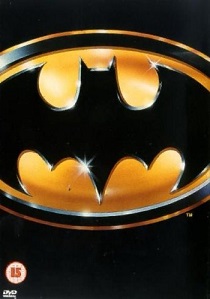 Gotham city is being overrun with petty criminals and the bigger fish who run the industries who are giving hefty kick backs to the more unscrupulous members of the force to allow them to continue with their unlawful activities. With the help of a tip off, the police finally manage to corner one of crime lord Carl Grissom top goons whilst he was in the middle of destroying some particularly damning evidence at a chemical factory.

Jack manages to escape the police's clutches, but not that of the mysterious Batman. After a brief struggle with Batman, Jack falls into a vat of industrial waste and is assumed to be dead. However, Jack survived his bath in the acid but, his face was discoloured and hideously disfigured. Now he's out for revenge on his boss, the people of Gotham and, of course, the Batman.

The dark and gothic picture is wonder to watch and there are no signs of artifacting or outlining and with a surprisingly low bit-rate too. There were a few picture imperfections, but this can be put down to the age of the film, and it suffered from a slight amount of graininess during the scenes with steam or smoke, but this seems to be a general problem with DVD anyway. Never-the-less it is a cracking picture which enhances the enjoyment of the film.

The wonderfully haunting and dramatic Danny Elfman score, so much a trait of any Tim Burton film, really envelopes you and uses all of the available channels to their full potential. There's also a hint of the eighties with some of Prince's (or whatever name he is going by these days) best material, and it is certainly worth while checking out his Batman soundtrack album too. Whilst the score takes most of the soundstage there is still a plentiful amount of effects in all of the channels, indeed the surround channels are hardly ever idle throughout the film and the dialogue is clear and audible in the centre, although the subwoofer was rather subdued.

The only disappointment are the extras, or lack of them with only some production notes and cast information. However, the productions notes do go into some detail with some nice picture clips from the film. Unfortunately the menu is static and silent and the navigation process is a little clumsy.

It's hard to believe that this mega box office hit made little or no profit. The reason? Thanks to the crafty, but perfectly legitimate, dealings by the a-cast members, with Jack Nicholson being the prime example, their contracts included a cut of the film and merchandising profits which netted Nicholson something in the region of a cool $60 million dollars.

The first film of the franchise is certainly still the best and Jack Nicholson totally steals the show with his character Joker, so much so that the part was almost written for him. Burtons trademark dark and gothic settings are perfect for this film and together with the superb soundtrack makes up for poor extras.