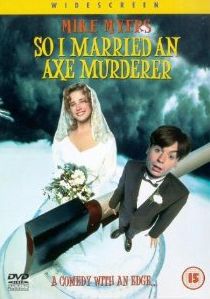 ReviewComedyRomanceThriller
Review Article Go back to homepage
Charlie Mackenzie is a San Francisco poet who fears commitment. When he meets somebody who may just break that, he starts to suspect she may not be quite who she seems.
Mike Myers, Nancy Travis, Anthony LaPaglia, Amanda Plummer, Brenda Fricker, Matt Doherty, Charles Grodin, Phil Hartman
Comedy, Romance, Suspense/Thriller
2
1 Hour 28 Minutes
Thank you for supporting DVD365.net when you order using the link(s) below.
Buy DVD
Story

Charlie Mackenzie is a wedding shy coffee house poet who can't commit. As soon as a relationship turns serious he's off down the road faster than a speeding bullet. Much to the disappointment of his parents he always manages to find an excuse to end a relationship. Sherri was a kleptomaniac (he still can't find his cat). Jill was unemployed, but Charlie really knew she worked for the mafia. Oh, and there was Pam, but she smelt of beef vegetable soup.

Whilst out shopping for a Haggis for his father, Charlie meets Harriet. Harriet works in a butchers shop and with a mad rush on Charlie decides to help her out and they get on like a house on fire. Harriet is not like all of the others. She's smart, sexy and crazy about Charlie and he's going to try his hardest to get over his problems with relationships.

When his mother shows him a copy of the 'Weekly World News', a bastion of newspaper truth in print, she mentions about the mysterious Mrs. X who murders her husband on their honeymoon night before moving on to another city. Harriet has been moving from one city to another, is she really an axe murderer or is his paranoia starting up again?

The picture quality is good, but it does tend to be grainy at times with the occasional picture imperfection and dust scratch. There also tends to be too much contrast but there are no signs of artifacting or outlining. Never the less, it is still far superior to the original video version.

Again, with the age of the film and the fact that this back catalogue title, little or no work done on it to tidy up either the picture or improve the sound. Whilst the genre of the film doesn't call for mass explosions or masses of surround effects the Dolby 4.0 soundtrack is reasonable enough. Although most of the sound stage tends to be taken up by the musical score the dialogue is clear enough and there's no need to keep adjusting the volume control.

As seems to be the case with most back catalogue material, the extras are far and few between and only tend to be accompanied by an extortionate price. Although there's an amusing trailer for the film hosted by Mike Myers, there are trailers for a number of unrelated, and frankly poor, films Cops and Robbertsons, High School High, Joe Dirt and Big Daddy. Definitely a case of disc padding material.

If you ever wondered where Mike Myers got his ideas from for Austin Powers then you only have to watch this film. The Scottish accent of Fat Bastard and that of Shrek is here as well as the maniac laugh and facial expressions of Dr. Evil. You could argue that his repertoire is a little limited with only a Scottish accent and ability to pull silly faces, but if it works why not use it?

Filmed not long after Wayne's World, this film has become somewhat forgotten. However, it is extremely funny with some great characters and some great cameo roles. It certainly highlighted the emerging career of Mike Myers. Highly recommended, even if the extras take the shine off the disc.