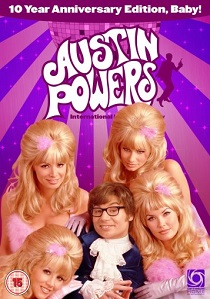 ReviewComedyCrime
Review Article Go back to homepage
What does the worlds best secret agent do when he defeats an arch-nemesis who becomes frozen in space? Why, you freeze yourself and wait for that nemesis to return to earth. That was over thirty years ago and guess who's just returned....
Mike Myers, Elizabeth Hurley, Michael York, Mimi Rogers, Robert Wagner, Seth Green, Fabiana Udenio, Mindy Sterling, Paul Dillon, Will Ferrell
Comedy, Crime
2
1 Hour 31 Minutes
Thank you for supporting DVD365.net when you order using the link(s) below.
Buy DVD
Story

Austin 'Danger' Powers is a super spy, and as all James Bond styled spies tend to be, a manic womaniser - but with rather bad teeth and with a penchant for photographing ladies in their underwear. Austin lives in London in the swinging 60's and, when he's not photographing or perusing women, he spends his days fighting his arch nemesis Dr. Evil who, in turn, spends his days trying to take over the world and kill Austin Powers with a whole host of useless assassins.

Having failed to assassinate Powers yet again, Dr. Evil has himself cryogenically frozen (along with his trusty cat Mr. Bigglesworth) and blasted into orbit so that he can return at a later date to terrorise the planet without Austin Powers thwarting his every move. Fearing for the future, and dedicated to the last, Austin decides to follow suit and is also cryogenically frozen at a secret MOD base.

For thirty years the pair remained frozen whilst the world around them changed from the swinging sixties, fuel crisis seventies, cold war eighties, the grunge filled nineties and right up until 1997 when Dr. Evil finally returns to bring chaos back to people of earth. Reassembling his, now rather aged, gang of evil cohorts, the freshly thawed Dr. Evil sets off from where he left off by stealing a nuclear weapon and holding the earth to ransom. However, in his absence, inflation has devalued his currency expectation whilst his evil corporation, left in the hands of Number 2, has performed rather well.

But all is not lost as British Intelligence thaws the only agent they have capable of thwarting Dr. Evil's nefarious plans. But a lot has changed in those intervening years, so how will Austin cope with a world where people are no longer having promiscuous sex with many anonymous partners without protection while at the same time experimenting with mind-expanding drugs in a consequence-free environment? Will he know what CDs and the Internet are? Will he still be sound as a pound? Will he still be able to find an NHS dentist? All these questions will be answered (well, most of them...)

The picture is bright and colourful with a good level of detail. Given the rather wacky colours from the 60's there's plenty of reds and other vibrant (and rather garish) colours on show - and it's all handled with ease with no problems with either artifacting or outlining. The transfer also appears to be identical to the previous release and no further tidying of the print has been performed - which given the amount of space now available on the disc is a bit of a disappointment. Still, since the original release wasn't particularly bad there's no further problems to report here.

The Dolby Digital 448 kbps 5.1 is certainly an interesting one. With the dialogue fixed firmly in the centre and front channels you'd be hard pressed to pick up any effects in either the LFE or rear channels. However, they are there and used to great effect and, to my shame, have to report that this film actually managed to made me jump as a plane flew over from the rear channels to the front. Whilst the effects channels are used to good effect they are also not overused. If you put this together with the cracking audio score and the clear and precise dialogue you end up with a soundtrack that really helps to lift this film into something special.

If you already own the previous release then this 10th anniversary edition isn't really going to set the world on fire. Now split over two discs, the only addition to the extras is the seventeen minute Austin Powers: A Shaggadelic Decade featurette - and even then, apart from the queue at the bank with his royalty cheque, Mike Myers is no where to be seen. Is this yet another shameless cash in or a true anniversary celebration? You'll need to decide for yourself.

The menus across both discs are animated and scored and, without those annoying copyright warnings and pain of death piracy videos, we're straight into the psychedelically coloured main menu. With the extras moved onto the second disc the only remaining extra on the main disc is the Audio Commentary with Mike Myers and Director Jay Roach. As commentaries go, it's a good one with plenty of information about the film, its background - naturally, including plenty of references to the classic Bond films of old - along with plenty of jokes and banter between the two.

Unfortunately, the new seventeen minute Austin Powers: A Shaggadelic Decade featurette is your typical back slapping affair with everybody praising somebody who in turn praises someone else. Still, it's interesting to see just how much (and, if you remember the original release - yourself) have aged. With interviews with Robert Wagner, the excellent Mindy Sterling and Michael York, it's rather notable, but unsurprising, that Mike Myers, Elizabeth Hurley and Will Ferrell were not present. Mind you, I'm not even sure whether this was made for this DVD release or something that has already appeared on television in the states.

The other new feature on the disc is the Interactive Quiz. It's rather simplistic, but you get asked a number of questions about the film and/or its characters with three possible answers to choose from. Get the answer right and you're asked another question, get it wrong and you have to start all over again. Mind you, I'm not sure whether there's an ultimate goal or you just keep on going until you get bored and decide to go and make a cup of tea or look out of the window instead.

As with the original release there's a number of Deleted Scenes and two Alternate Endings. Whilst the endings are nothing special, with the version used in the film far superior, the deleted scenes are also a mixed bag. However, the two "Death of a henchman" scenes are hilarious and really should have been included in the film (although I'm sure they were in the UK theatrical release - but then again, that was over ten years ago and my brain matter has shrunk somewhat since then).

Next up is a four minute 1997 Promotion for the original theatrical release. With a relatively poor picture and sound quality (the film soundtrack is in the right channel whilst the narration is in the left) there's plenty of film footage and a few "in character" interviews with Austin Powers and other cast members. Next up is a three minute Music Video from Ming Tea which, again, includes numerous clips from the film whilst Austin sings about the BBC and it's numerous channels (again, another weird one to go with the rest of the film).

Early DVD releases tended to include lots of text based extras and with the inclusion of a multi-page Spy Genre Retrospective and Cast Biographies which, rather surprisingly, have all been updated and include lists for Mike Myers other titles such as Shrek and his other Austin Powers films. The final section the Film Cameos section with some textual details, plus the actual scene, about the cameo roles from Tom Arnold, Christian Slater, Carrie Fisher, Burt Bacharach and Rob Lowe. If you don't already own the initial DVD release then this is certainly a good selection of extras to welcome you to the world of Austin Powers. However, if you already own the original then there's actually very little to encourage you to make another purchase.

There are also some extremely well thought out comedy moments with a very clever version of the balloon dance with sausages (yes, I know) and bottles of champagne. Naturally, these got plenty of laughs and are repeated during the two equally successful sequels. Austin powers is played brilliantly by Mike Myers, but it is another Mike Myers character, Dr. Evil that steals the show (I wonder if he got paid twice?). It's the way he is so out of touch with reality and all things evil - like demanding a million dollars for ransoming the world - whilst Austin has trouble with a CD and a turn table.

Even ten years on from the original release there are still so many things in this film to recommend it. Spawning two sequels, the jokes are just as fresh today as they were ten years ago. However, if you already own the original DVD release then it would hard to justify splashing out on this new edition - after all, there's nothing particularly new about the extras nor are there any sonic or image improvements to talk about. Never the less, if you love toilet humour and stupid jokes by the truck load then this film is going to be your bag baby!