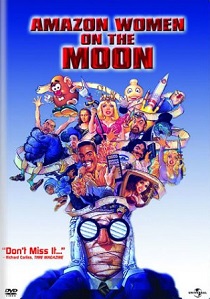 No, pervert, it's not one of those late night sort of films but a send up of that awful television programming which is known as "late night television" and the vast amount of channel hopping involved in trying to find anything interesting to watch. The feature is centred around a television station which is attempting to show a low budget 1950's style sci-fi film where a group of all American heroes, and a monkey called "Lunie", go on the first manned mission to the moon. Not only do they make the amazing discovery that it's not made of cheese, but it has an earth like atmosphere and is inhabited by a group of lovely ladies who have never seen a man before. Hmmm, kind of sounds like of one those films now doesn't it?

However, things with late night television are never going to be that simple. Be prepared to have your late night viewing interrupted by bizarre adverts, strange shorts and total weird special features. Highlights include the hilarious "Mondo Condo" where a rich and affluent Arsenio Hall struggles with the technology, food and the fixtures in his apartment, "Son of the Invisible Man" where a completely bonkers scientist thinks that he has become invisible, "Bullsh*t or Not" where, with no expense spared for the special effects, Henry Silva investigates whether the lock ness monster was indeed Jack the Ripper. Oh, and let's not forget that there is a spoof science fiction film somewhere in there.

For the age of the film the picture is surprisingly bright and colourful with a good level of detail and high bit-rate throughout. There is also no sign of artifacting, outlining, pixelisation and surprisingly little grain (except where the spoof section called for it). The picture quality is also far superior to original release which suffered from large amounts of grain and dust scratches and if you are an owner of the original it may well be worth your while getting a copy of this version. A well deserved pat on the back is due for the guys at Universal for their time and effort put into this back catalogue release.

The sound is nothing to get excited about and the uninspiring two channel mono soundtrack can just be as easily listened to without the need of a surround system. It's a shame nothing more was done to remaster the soundtrack, but then again films made in the 1950's wouldn't have had anything like stereo, let alone a fully blown Dolby Digital 5.1 soundtrack with room shaking LFE effects.

Unlike the original barren release Universal have managed to find some extras. After all, it wouldn't be much of a Collectors Edition without them. Although the menu is a static and silent affair the extras are reasonable enough and add value to the package. There are a number of deleted scenes which, quite frankly, are rubbish and deserved to be deleted, and some rather amusing outtakes plus the usual theatrical trailer and other film recommendations. It's also rather interesting that the internet is a buzz with people mentioning that the deleted scenes have already appeared in previous television broadcasts of the film. Are they therefore really deleted scenes at all? There's also more claims that this DVD version of the film is still missing scenes. Are we to expect a super-deluxe directors edition of the film sometime in the future?

If you liked Kentucky Fried Movie then you'll love Amazon Women on the Moon. You only have to read the cast list above to see the vast array of comedy celebrities, and Steve Guttenberg, to see that you're on to a winner. Some people may dismiss this film as stupid or boring, but then again these same people probably won't like spoof films like this. OK, so it's no Monty Python, and some of the jokes do fall a little flat, but the majority of this film is just hilarious and is even better after a few drinks. Fortunately, the delete scenes have remained as such and although I nearly always complain that these scenes should be restored to the film, the collection on offer here are not funny at all. A definite good move from director John Landis.

You may have a large DVD collection, but how many of those have you watch more than once? I can guarantee that if you love Amazon Women on the Moon then it will be given a well deserved spin more times than the majority of your collection. It's daft, it ridiculous, it's hilarious. Just remember to watch through to the closing credits for another spoof feature on the dangers of youth and "social diseases".