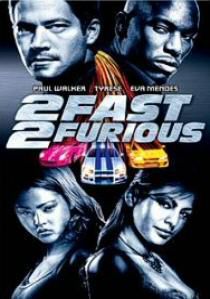 Ex-cop and street race Brian O'Connor returns from the first film and this time he's racing on the streets of Miami. Disgraced and out of the force he spends his nights racing for money. But during one nights racing the police finally manage to put a stop to their racing antics, impound the cars and threaten the racers with prison. After all, this street racing lark is not really becoming of such a nice place as Miami. Oh, plus the fact that it's pretty much illegal.

But the Miami police and the DEA had the bust in mind as they need somebody they can trust to go undercover. They approach Brian and offer him the chance to have all charges dropped if he'll become a driver for local drugs baron Carter Verone. The DEA already have agent Monica Fuentes undercover and with the tip off that Verone is about to move a large amount of money they need to get Brian undercover quick.

But Brian is not going to do anything without his old friend Roman. Trouble is, Roman is an ex-con who's not too happy about the fact his best friend went on to be a police officer. Fortunately, Roman is tempted by the DEA's offer to wipe his criminal record and the fact that both Brian and Roman will be driving some of the best sports cars Miami's police impound yard can offer. It's time to engage first gear and put the pedal to the metal.

The picture is bright and colourful with a huge amount of detail and some wonderfully rich and vibrant colours. The locations in and around Miami are reproduced with near perfect pixel precision. Only the night time street racing scenes were a little disappointing as the contrast level were slightly too high causing the black levels to be compromised somewhat. Never the less, the bit rate remained high throughout and there are no signs of artifacting or outlining. Director John Singleton also manages to pull some off some amazing camera work with a number of incomprehensible sweeps around the speeding cars. I'm sure it was impossible to do on the open road and was done in a film studio with the help of a green screen. Either way, it is impressive stuff.

The thumping bass of the techno soundtrack ensures that 2 Fast 2 Furious will give your sound system one of the most serious workouts it will ever receive. As soon as the film starts your subwoofer angrily announces its presence with some superb room shaking bass from the near continuously present musical score and engine roar. However, it is not only the score that ensures that a rollicking time is enjoyed by all. I've lost count of the number of times that Hollywood has failed to deliver a soundtrack that really compliments the on screen action. Fortunately, 2 Fast 2 Furious breaks that mould with a rip-roaring soundtrack that exercises every since inch of your surround system to the max.

Even though there's no DTS soundtrack, and if there was I'm sure it would be awesome, the dynamics of the Dolby Digital soundtrack ensures that it shoots to the top of the pile for sound system show offs. The separation in the front channels is perfect whilst the dialogue remains firmly fixed in the centre channel throughout. I've already highlighted the extremely active LFE channel, but the most active channels of all are the surrounds. Once the cars are on one of their many high speed duels the rear channels are bursting with activity. There's the swoosh of passing traffic, the growl of the car engine, the clatter of police helicopters and let's not forget the musical score. It's got it all.

The menu system is animated and scored with a novel method of accessing the extras. Upon inserting the disc you are required to select one of the three main characters cars with each one giving you access to a differently designed menu, extras and profiles related to the character. You can then see Paul Walker, Tyrese and Devon Aoki getting to grips with the cars as they are put through their paces at a driving school. It's not only the money that makes the life of a Hollywood actor so pleasant as not only are they driving some fancy cars but they're also learning some valuable driving skills too. Nice work if you can get it eh?

With the film being car related there's also a number of features on the cars used in the film along with how you'd got about modifying a standard production line sports car to something a little more special. The usual supply of deleted scenes and outtakes are also included, and just like the film they are not that particularly interesting or funny. Director John Singleton also provides an audio commentary track. Unfortunately, it is not that interesting and you'll soon become bored with it.

With the surprisingly successful, and profitable, release of The Fast and the Furious it was really only a matter of time before a sequel was produced. Whilst the first film at least some semblance of a plot, the same can't really be said of the sequel. In fact, you could package it all up and stick it on a computer console without any changes to the storyline. Sure, there's speeding cars and fancy women, but if you are not into a street racing and ridiculously enhanced cars there'll be little of interest for you here.

Mind you, at least the Americans show you how to go about properly upgrading a car. Whilst there's plenty of fancy sports cars on show, including pointless under chassis neon lights and heaven knows what else gadgets, all that the British boy racers can come up with is a Citroen Saxo or Vauxhall Corsa 1.0 fitted with a big exhaust pipe and loud stereo.

Whilst the picture, sound and extras are all actually rather good, adding a great deal of value to the overall package, the entertainment side of the film will really only appeal to a limited audience. As a result the wider viewing public will give this film a wide berth leaving it limping along the hard shoulder of the M25 with a blown gasket. Trouble is, it's that remarkable soundtrack that makes a viewing all that more tempting, even if the material wouldn't tax an amoeba.