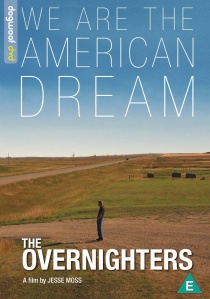 Desperate, broken men come from far and wide to North Dakota to chase their dreams and run from their demons, hoping to find work in the local oil fields. The powerful Oscar nominated feature documentary, The Overnighters follows the life of a local Pastor, who risks everything to help them. Following its critically acclaimed theatrical release it comes to DVD on 9th February 2015, courtesy of Dogwoof.

In the tiny town of Williston, North Dakota, tens of thousands of unemployed hopefuls show up with dreams of honest work and a big pay check under the lure of the oil boom. However, bus loads of newcomers chasing a broken American Dream step into the stark reality of slim work prospects and nowhere to sleep. The town lacks the infrastructure to house the overflow of migrants, even for those who do find gainful employment.

Over at Concordia Lutheran Church, Pastor Jay Reinke is driven to deliver the migrants some dignity. Night after night, he converts his church into a makeshift dorm and counselling centre, opening the church's doors to allow the "Overnighters" (as he calls them) to stay for a night, a week or longer. They sleep on the floor, in the pews and in their cars in the church parking lot. Many who take shelter with Reinke are living on society's fringes and with chequered pasts, and their presence starts affecting the dynamics of the small community. The congregants begin slinging criticism and the City Council threatens to shut the controversial Overnighters program down, forcing the pastor to make a decision which leads to profound consequences that he never imagined.

HotUHD
Say the 'B' word three times and have a wonderful Day-O as Tim Burton's Beetlejuice arrives for the first time on 4K UHD 31st August 2020 from Warner Home Video. END_OF_DOCUMENT_TOKEN_TO_BE_REPLACED
Top PicksView