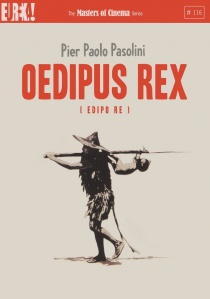 Three years after The Gospel According to Matthew, Pier Paolo Pasolini resumed his series of classical adaptations with a savage, highly personal take on Sophocles' ancient Greek tragedy Oedipus Rex [Edipo Re]. As his first colour feature, Oedipus Rex makes brilliant use of wildly alternating Moroccan landscapes to transpose collective myth into a particular vision that is at once tender, sensual and wholly unsparing.

The film is divided into three sections set in different eras. The opening takes place in 1920s Italy and recounts a birth that echoes that of the director himself, the product of a beautiful bourgeoise's affair with a military officer. The mid section depicts a time "outside of history" - it is here that the myth of Oedipus (portrayed by Franco Citti of Accattone and Coppola's The Godfather), one of patricide and incest, plays out opposite the young man's mother/lover (Silvana Mangano). An epilogue shot on the streets of present-day Bologna finds Oedipus playing his flute for a bustling citizenry.

With its kinetic handheld camerawork and strikingly primeval costumes, Pasolini's film rattles its art-genre framework in the enduring quest to exorcise repressive emotional forces. The Masters of Cinema Series is proud to present Pier Paolo Pasolini's Oedipus Rex for the very first time on Blu-ray, in a Dual Format (Blu-ray + DVD) edition, released in the UK on 24th September 2012. A DVD edition is also available.

DVD
Will Smith and Martin Lawrence are back on the case in the roles that launched the dynamic duo to global superstardom in Bad Boys For Life, arriving on DVD, Blu-ray and 4K UHD 25th May 2020 from Sony ... END_OF_DOCUMENT_TOKEN_TO_BE_REPLACED
Hot PicksView